NTSB: Terrain warning system in floatplane that crashed near Ketchikan was turned off 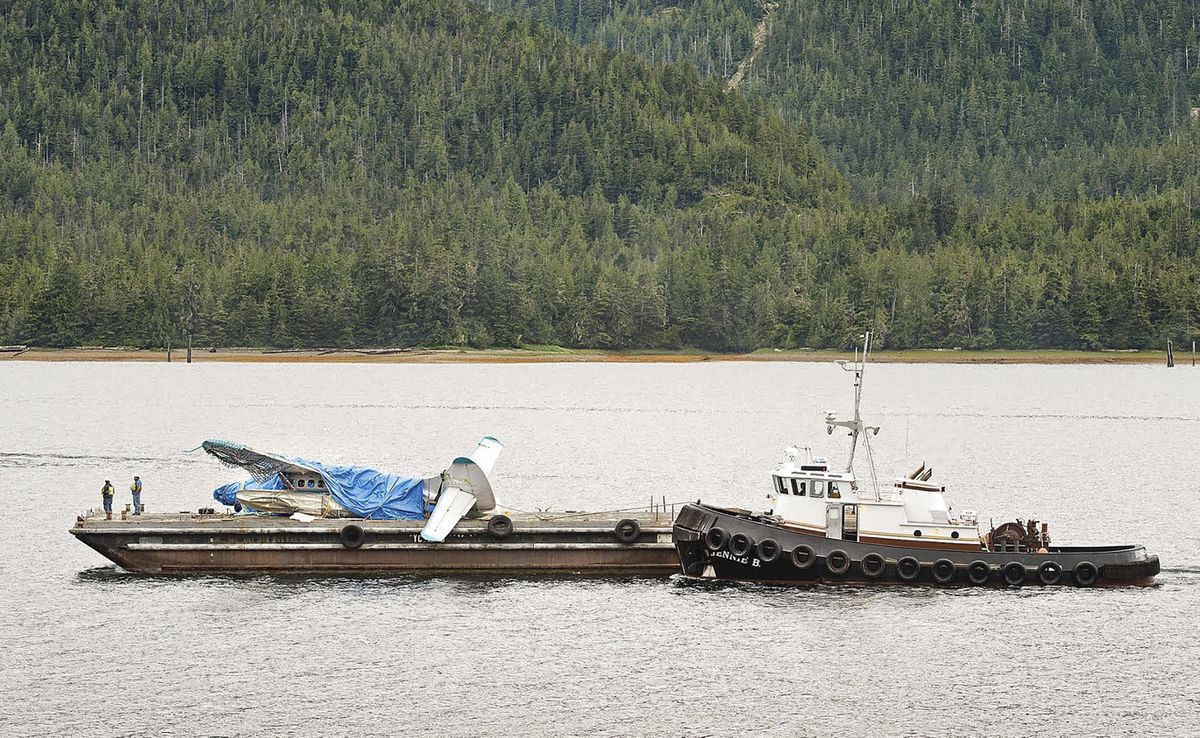 This Saturday, July 14, 2018, photo shows a Taquan Air plane that was involved in a crash July 10, 2018, on Prince of Wales Island being barged into Ketchikan. (Dustin Safranek/Ketchikan Daily News via AP)

This Saturday, July 14, 2018, photo shows a Taquan Air plane that was involved in a crash July 10, 2018, on Prince of Wales Island being barged into Ketchikan. (Dustin Safranek/Ketchikan Daily News via AP)

Investigators have found the pilot of a Taquan Air plane that crashed into a mountainside near Ketchikan on July 10 with 11 people on board was not using a warning system meant to prevent such collisions.

The National Transportation Safety Board's released its preliminary report on the crash Wednesday. Some of the circumstances described in the case echoed those in the 2015 crash of a Promech Air flightseeing plane that killed the pilot and eight passengers near Ketchikan. Locals and tourists routinely travel the region in small planes, traversing rugged environments in fast-changing weather.

In both crashes, a floatplane pilot became disoriented in the low-visibility weather conditions common to Southeast Alaska and subsequently crashed into a mountainside.

And in both crashes, a system that's supposed to warn pilots when they are too close to terrain was switched to "inhibit mode" — a common practice in areas where pilots frequently fly low and through mountain passes, causing near-constant "nuisance alarms," according to federal investigators' report on the 2015 crash.

The July crash of the Taquan Air plane had a happy ending: All 11 people onboard survived. Six people sustained serious injuries and four walked away with minor injuries.

In 2016, Promech Air operations were purchased by Taquan Air.

In a statement Wednesday, Taquan Air President Brien Salazar said the Ketchikan-based company was studying the report to "better understand how the incident occurred, and ensure an accident like this doesn't happen again."

The pilot of the crashed plane "is not eligible to fly for Taquan at this time," Salazar said. "This follows our company protocols and there is no existing timeline for reinstating his status."

Wednesday's NTSB report detailed the sequence of events leading up to the crash.

The pilot had picked up 10 passengers at Steamboat Bay Fishing Club, a luxury lodge on Noyes Island, around 7:45 a.m. July 10.

"Marginal visual meteorological conditions prevailed," according to the report.

The flight had been cleared to take off after meeting the requirements of a company's risk assessment procedure, Salazar said.

The group was flying back to Ketchikan when visibility "decreased rapidly" around an area called Sulzer Portage — quickly going from "3-5 miles to nil," according to the report.

The pilot tried to turn around, saw what he thought was water and became "momentarily disoriented."

"Shortly thereafter, he realized that the airplane was approaching an area of snow-covered mountainous terrain" so he tried to climb sharply to avoid it, according to the report. "As the emergency climb continued, the airspeed decayed, and the airplane subsequently collided with an area of rocky, rising terrain."

The impact into Jumbo Mountain, about 9 miles west of Hydaburg, sheared off the plane's floats.

Passengers on the plane told the NTSB investigators they were nervous as the weather closed in. One man said he noticed "numerous course deviations" and times when "all forward visibility was lost" as the plane flew through clouds.

"(The passenger) said he became uncomfortable and was thinking it would be prudent just to land on the water," the report said.

Another man seated toward the rear of the plane texted a fellow passenger to "ask the pilot to land and wait for the weather to improve."

Both passengers said they couldn't see the mountain until just before the plane crashed into it.

One described seeing a "large mountain loom directly in front of the airplane" and thinking there must be a pass around it because the plane couldn't climb above it.

The Terrain Awareness and Warning System, which is supposed to sound an alarm when a plane is about to fly into a mountain or other terrain, was in the "inhibit mode" at the time of the crash, according to the report.

The Federal Aviation Administration doesn't require the system to be used when a plane is flying under visual flight rules, said Salazar.

One of NTSB recommendations that came from the investigation into the 2015 Promech Air crash was to fix the nuisance alerts problem that led some pilots to turn off the warning system.

"This issue is important to us, and we are dedicated to working with the FAA and other operators to address it."

NTSB investigators are still in the process of analyzing the crash, said the agency's Alaska chief, Clint Johnson.