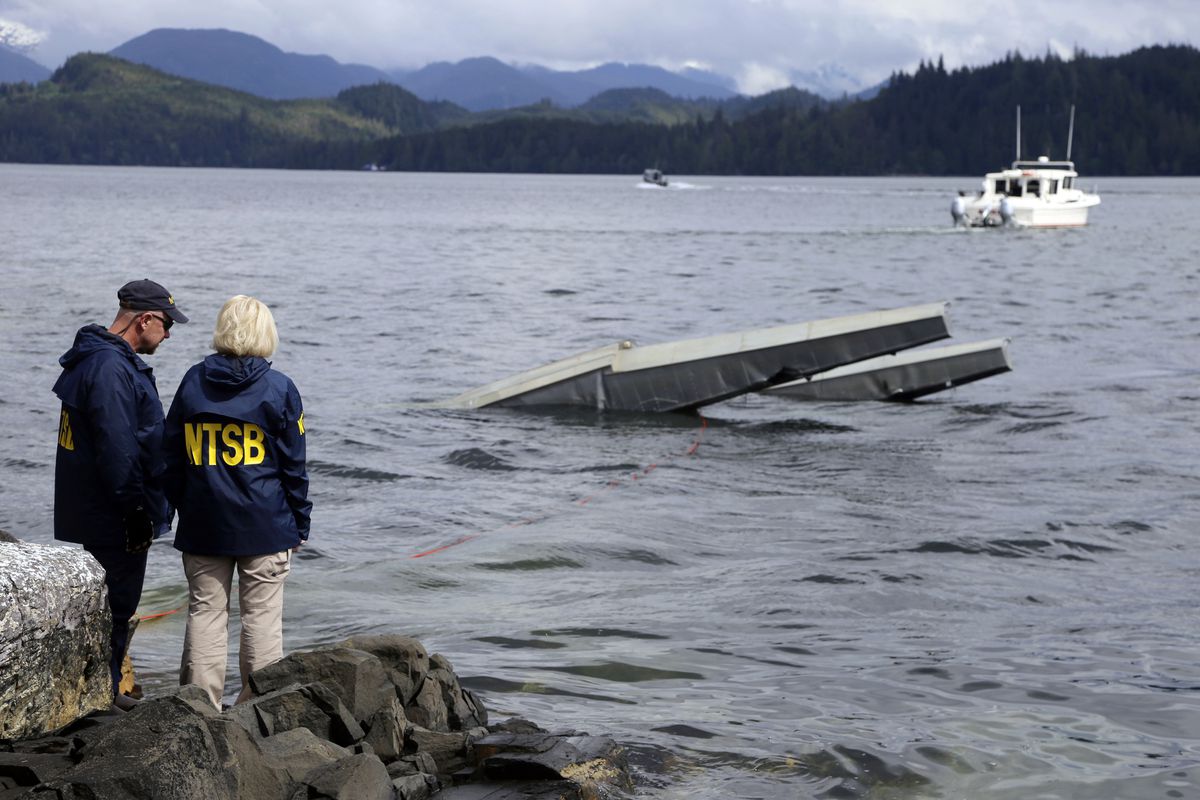 The pilots of two flightseeing planes that collided near Ketchikan in May 2019 didn’t see each other because their views were partly obstructed.

But they also didn’t get alerts about nearby aircraft in the crucial minutes before the crash because equipment that could have provided alerts wasn’t working properly.

That’s according to a probable cause finding issued Tuesday by the five members of the National Transportation Safety Board, meeting remotely from the Washington, D.C., area.

Six people died — Mountain Air Service pilot Randy Sullivan and his four passengers, as well as one passenger in a Taquan Air plane — and 10 suffered injuries when the aircraft converged at 3,350 feet in clear skies.

The board’s findings call into question a total reliance on the longstanding “see and avoid” principle to avoid midair collisions and encourage alerts that notify pilots about nearby aircraft without forcing them to stare at a display while they’re flying.

The Ketchikan-based floatplanes carried passengers from the same cruise megaship, the Royal Princess, that docked that morning on its inaugural Alaska run from Vancouver to Whittier. The planes were returning from flightseeing tours of Misty Fjords National Monument.

The board, in a unanimous vote, determined the probable cause of the accident was the “inherent limitations of the see-and-avoid concept, which prevented the pilots from seeing the other airplane before the collision,” as well as the absence of visual and spoken alerts from traffic display systems in both planes while flying in the busy skies between Misty Fjords and Ketchikan.

Contributing to the accident: a Federal Aviation Administration action that resulted in the installation of new transceivers without full alerting capability, and a lack of a requirement for companies that carry passengers commercially to use traffic alert systems with spoken alerts.

The Mountain Air plane had leveled off and the Taquan plane was descending, both headed for the Mahoney Lakes area, investigators say.

Both planes were equipped with surveillance systems that transmit traffic data, but that layer of protection failed, officials say.

Generally, it takes at least 12 1/2 seconds for pilots to avoid a collision after spotting another aircraft, according to the FAA.

The Mountain Air pilot used an iPad with a traffic alert display that could have warned him about the other plane about 1 minute and 44 seconds before the collision, investigators found. Investigators couldn’t retrieve data from the damaged iPad, and couldn’t say for sure the display was running, though they say it probably was.

The Taquan Air Otter needed to be broadcasting a certain type of altitude reading for the Beaver pilot to see it on the display, investigators found.

It wasn’t — because a piece of equipment was turned off two weeks earlier during maintenance, investigator Brice Banning told the board. The Taquan pilot didn’t realize it was off.

Meanwhile, an FAA upgrade to existing safety systems — improvements that began in Alaska — actually decreased the Taquan Air Otter’s alert capabilities, investigators found: A 2015 equipment update replaced a device with verbal and visual alerts, and installed one without them.

The Otter did carry a visual display that could have alerted the Taquan pilot to the other plane, but the pilot told investigators the last time he checked it was four minutes before collision. Investigators say he saw traffic near his intended route but expected the planes to be flying back to Ketchikan and was busy with in-flight checks as he maneuvered toward the falls.

The planes collided at about 12:21 p.m., investigators say.

A passenger on the Otter’s left side told investigators he saw the Beaver before the crash and initially thought the planes were flying in formation before realizing they were about to collide.

The Otter’s propeller apparently struck the right wing of the Beaver, which broke up in midair. The tail of the Beaver hit the left side of the Otter, popping open a door. A passenger sitting near the door suddenly had one leg sucked outside the plane.

The Otter crashed in water about 10 miles northeast of Ketchikan near the eastern shore of George Inlet. The person who died in the Otter suffered trauma to their head, neck and extremities and also drowned, according to medical findings described Tuesday.

Before an animated re-enactment of the collision was played at the start of the hearing, Sumwalt warned people who knew the victims that they might want to step away as it played.

The animation depicted the likely views from both planes.

In the Beaver, Sullivan’s view of the other plane was blocked by part of the plane and his right-seat passenger before the collision, the NTSB analysis found. In the Otter, pilot Lou Beck’s view was obscured intermittently by a window post, “most critically” in the 11 seconds before the collision, investigator William Bramble told the board.

Board member Jennifer Homendy traveled to Ketchikan with the investigations team after the crash.

“I know family members and friends are watching,” Homendy said Tuesday. “We have thought about you a great deal over the last 23 months, and going forward, you will be part of our work to make sure that our safety recommendations issued today are implemented.”

Along with the probable cause finding, the board issued nine new safety recommendations including several with national ramifications based on the grim consequences of the deadly Alaska accident.

Chief among them is a recommendation that FAA requires any Part 91 and Part 135 operators in “high traffic tour areas” carry alerting technology called Automatic Dependent Surveillance – Broadcast equipment that transmits data both “out” by broadcasting it and “in” by receiving it. The recommendation also includes all other aircraft in those areas carry at least ADS-B “out” technology.

Other safety recommendations were issued to aviation industry groups asking them to inform their members of the circumstances of this midair collision and encourage their members to address ways to maximize the safety potential of traffic display and alerting equipment.

The NTSB also made recommendations to Taquan Air and the mobile application manufacturer ForeFlight, believed to be in use on the Mountain Air plane.

Among other priorities: restating to the FAA the importance of requiring Safety Management System programs rather than the voluntary program in place now.

Only 20 of the country’s almost 2,000 operators who carry passengers under the Part 135 classification — including flightseeing operators in Alaska — have an accepted system in place, according to Sumwalt. Taquan is one of the 20; the company adopted the protocols after the accident.

Investigators said Tuesday that, had Taquan had a system in place beforehand, it’s possible the company could have detected the disabled switch.

FAA officials have already announced that that the agency has started the Safety Management System rulemaking process for Part 135 operators.

The agency said improving aviation safety in Alaska has “long been” one of its priorities in a statement Tuesday. The agency more than 20 years ago pioneered changes in Alaska now used throughout the aviation community, including systems that alert pilots to other aircraft, terrain and weather.

“The FAA will carefully consider all of today’s recommendations from the NTSB as that work continues,” the statement said.