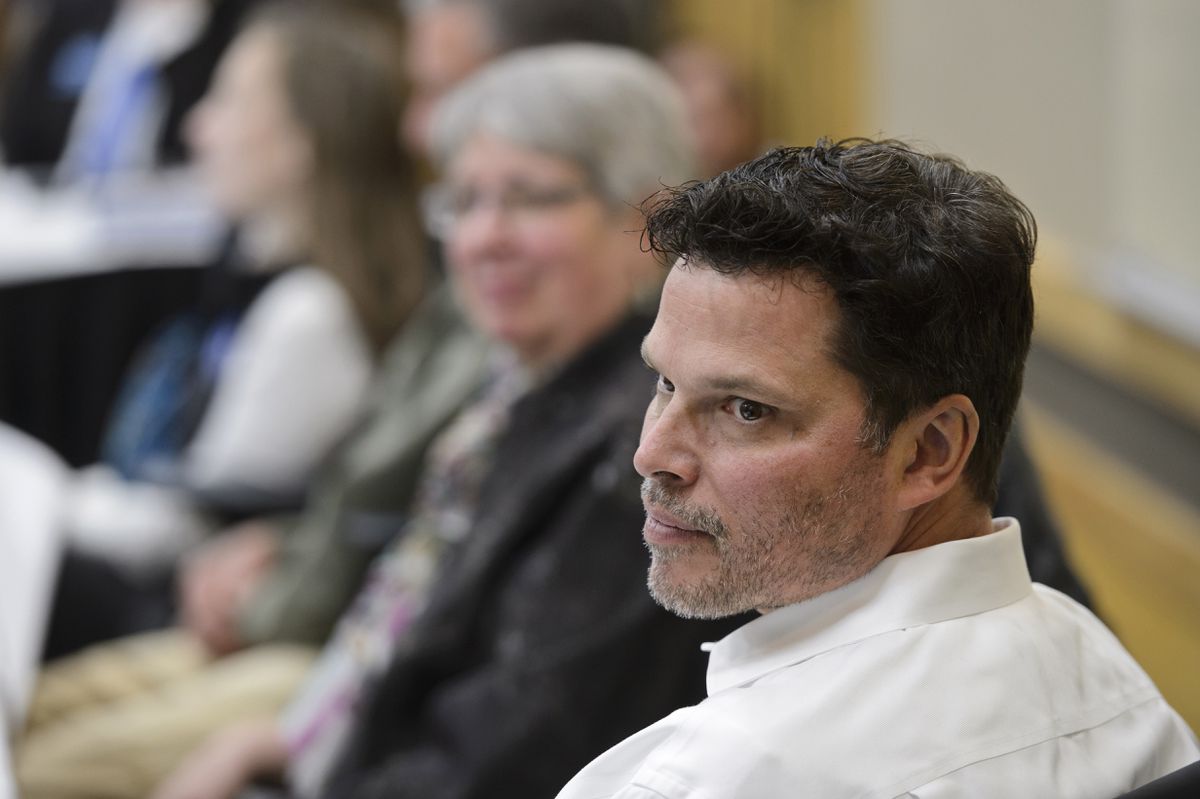 In this Sept. 12, 2019, file photo, Andy Teuber attends a meeting at the University of Alaska Board of Regents (Marc Lester / ADN)

In this Sept. 12, 2019, file photo, Andy Teuber attends a meeting at the University of Alaska Board of Regents (Marc Lester / ADN)

Amy Belisle watched as her new husband’s helicopter tracking signal stopped over the open water of the Gulf of Alaska near Kodiak last month.

Belisle never heard from Andy Teuber again, she testified Wednesday at a presumed death hearing that added new details, but also new questions, to the mystery surrounding her husband’s disappearance.

Teuber, at 52 one of Alaska’s most prominent executives after more than a decade as president and chairman of the Alaska Native Tribal Health Consortium, had recently resigned amid accusations of sexual misconduct by a former co-worker.

Teuber went missing after the apparent crash of his Robinson R66 helicopter on March 2 in the Gulf of Alaska.

A six-person jury on Wednesday unanimously found that Teuber did not survive the crash, based on evidence and testimony from four witnesses. None provided information indicating Teuber survived.

“He is presumed to have come to his death by accident,” Anchorage District Court Judge Brian Clark said, reading the verdict Wednesday after less than an hour of deliberations.

A presumed death verdict allows family members to deal with the financial affairs of someone missing without physical proof of death, such as remains.

Teuber’s former domestic partner, Natasha Kutchick, filed a presumptive death petition in late March. Kutchick, who participated in the hearing but did not testify, has three children with Teuber, according to state public official financial disclosure filings.

Kutchick knew Teuber for 25 years and was his designated personal representative, according to a statement provided by her attorney.

“This has been a very trying time for his friends and family,” the statement said. “They ask that their privacy is respected as they continue to heal.”

A National Transportation Safety Board report released last month found the crash occurred as Teuber tried to reach family members ahead of a news story detailing the allegations against him. A pilot for the charter company Teuber owned, Kodiak Helicopters LLC, described him as “distracted” and not acting normally.

The story, published later that day by the Anchorage Daily News and ProPublica, detailed allegations of harassment and sexual misconduct made in a Feb. 23 resignation letter to the ANTHC board from a former assistant, Savanah Evans, including accusations that he “unrelentingly coerced, forced and required sex” of her. Teuber disputed the accusations.

The reason for Teuber’s trip to Kodiak was not mentioned during Wednesday’s hearing, conducted from a courtroom but with witnesses testifying remotely.

Belisle, an employee-relations coordinator for Amazon, testified she had known Teuber for five years.

They were married in Las Vegas on March 1 and flew back to Anchorage on March 2 around noon, she testified. They planned to fly together to Kodiak in Teuber’s helicopter, located at Merrill Field.

Belisle texted Teuber’s bookkeeper, Elisa Vakalis, around 11:40 a.m. that day, Vakalis testified. “She had asked if I could pick Andy up from the airport.”

Vakalis said she met Teuber just over a year earlier, in February 2020, when she began doing the “personal books” for his businesses. She picked up Teuber at 12:45 p.m. and brought him to a hangar at Merrill Field, where they waited for his pilot to bring back the helicopter, and for Belisle to join them.

It was unclear why Teuber asked Vakalis to pick him up at the airport, and specifically why he made that last-minute decision. Vakalis did not respond to a request for more information after the hearing ended.

The couple talked with the bookkeeper about “our wedding that had happened the day before and our plans for the future,” Belisle testified. The couple planned to move to Washington state together.

Rather than flying to Kodiak together, she said, Teuber decided it would be best if he flew down solo to “handle a family matter without my presence.”

Teuber, in a sweatshirt and khakis, got into the helicopter and took off after 1:30 p.m., Belisle said.

She realized something was wrong after 3 p.m. that afternoon as she monitored a real-time tracking system aboard the Robinson.

“Right over the Barren Islands, the helicopter symbol ... stopped moving,” Belisle said, pausing in the middle of the sentence, her voice shaking. She swallowed before continuing. “Which was weird ...”

Belisle started making calls that resulted in the U.S. Coast Guard starting a search and rescue mission after notification around 5 p.m. Later that evening, Belisle said, she got a call: The Coast Guard had spotted a float matching one thought to be on Teuber’s helicopter in the water. The odds of survival were low.

“They said out of respect for my father and Andy that they would continue to search as long as I had asked them,” she said, adding that she later decided to ask the search be called off rather than jeopardize the safety of the Coast Guard crews after consulting friends in Kodiak and Teuber’s family.

The Coast Guard commander in charge of the search mission, Matthew Hobbie, said the helicopter’s last known position was at the entrance to Cook Inlet just south of the Barren Islands, an area known for unpredictable flying conditions. The search covered 872 square nautical miles before it was suspended just before noon March 3.

He didn’t mention Belisle’s father, but said the search continued past the likely point of “survivability” at midnight into the next day “given the benefit of the doubt that because of the will to live he may have survived past that.”

More debris from the helicopter turned up after the initial search. Kodiak pilot Keller Wattum testified he was able to match a helicopter skid and part of a frame located by an Afognak Island lodge owner with Teuber’s helicopter based on a unique serial number.

Vakalis testified she’d seen no financial activity from Teuber since his disappearance.

“I have seen all the business bank accounts, credit cards,” she said. “There’s been no anything initiated by him or any indication that would give any suspicion to anything.”

Teuber was paid a salary of more than $1 million per year to oversee the consortium, which describes itself as the largest tribal health organization in the country, serving more than 170,000 Alaska Native people in communities statewide.

According to his most recent public official financial disclosure filing, Teuber in 2019 also earned between $500,000 and $1 million as president and CEO of Kodiak Area Native Association, a regional tribal health provider.

Teuber served on other boards, including the Alaska Federation of Natives and the University of Alaska Board of Regents. Teuber resigned from the AFN and university boards the same day he stepped down from his ANTHC job.