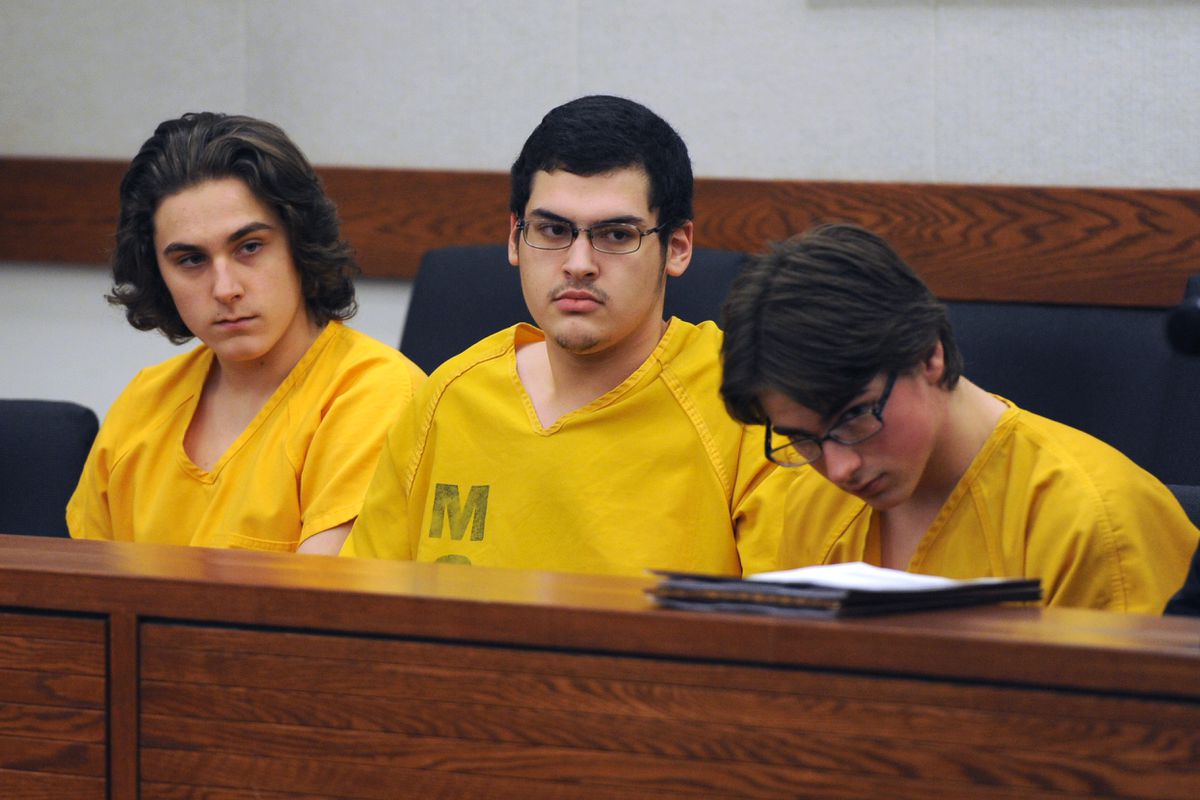 PALMER — Four of five teenagers charged in the murder of David Grunwald once again faced the slain 16-year-old's parents in a Palmer courtroom Tuesday.

Four Valley teenagers entered not guilty pleas to charges of murder and kidnapping during a hearing two weeks ago. A fifth entered the same plea for a charge related to helping destroy evidence.

Grunwald's parents, Ben and Edie Grunwald, were in attendance in Palmer Superior Court for the standing-room-only hearing, along with relatives of the teens charged in his death.

Beefed-up security in the courtroom included not only Alaska State Troopers court officers, but also a uniformed trooper and two Palmer police officers.

"They get to breathe every day," Ben Grunwald said of the suspects after the hearing. "Their little paw gets hurt, they get to go to the doctor."

Renfro wore a bandage wrapped around his right forearm Tuesday; the cast was also visible at the hearing on Dec. 13.

Authorities say the teens each played a role in Grunwald's shooting death the night of Nov. 13. Court documents say one of them told investigators Grunwald was bludgeoned with a pistol and driven, semiconscious, to the Knik River before he was killed. His burnt Ford Bronco turned up the next day, but his body wasn't found near the Knik until Dec. 2 after hundreds mounted a desperate but fruitless search.

The nationally publicized case revealed a grim underside to the Valley's teen community. Prosecutors say they aren't sure the trial can be held in Palmer given the level of community interest, which could taint a jury pool.

The Grunwalds say they're looking closely into the effects of Senate Bill 91 — a crime reform bill intended to reduce prison crowding costs while encouraging rehabilitation — and whether it may have played a role in David Grunwald's eventual death. Critics say the law is allowing criminals to go free.

"Our goal is to get rid of the crime," Edie Grunwald said. "If they're not worth arresting because of budgetary reasons, that doesn't jive with the community."

Adam Mokelke — whose daughter was David Grunwald's girlfriend — last week publicly questioned on social media whether SB 91 allowed two of the murder defendants to go free in a case earlier this year.

Barrett and Peterson were arrested in June for a bizarre robbery, assault and kidnapping case involving an Eagle River resident.

The victim agreed to pay for sex but didn't have the money and was beaten and driven against his will from Wasilla to his Eagle River home, according to a sworn affidavit filed with charging documents. The victim ultimately turned a gun on his attackers and called police, the charges said.

Devin Peterson's older brother, Damien Peterson, was convicted of second-degree assault in that case and is now on probation. But prosecutors say the case against Barrett and Devin Peterson never even got far enough to be affected by SB 91.

Devin Peterson and Barrett were not charged because the victim in the case engaged in "questionable" conduct, Palmer District Attorney Roman Kalytiak said in an email earlier this month. The victim also couldn't identify either Peterson or Barrett, Kalytiak said.

Damien Peterson implicated them both, but appellate courts have ruled a co-defendant's statements after a crime can't be used as evidence against others unless he agrees to testify against them, he wrote.

"So, bottom line is that Devin Peterson and Austin Barrett were not prosecutable," said Kalytiak.

Ben Grunwald said SB 91 "isn't all bad" because of new mandatory sentencing provisions, including for murder that involves physical torture.

"That's what they did to David," he said.

The next hearing for the five defendants is Jan. 27. They are currently scheduled for trial the week of Feb. 6.