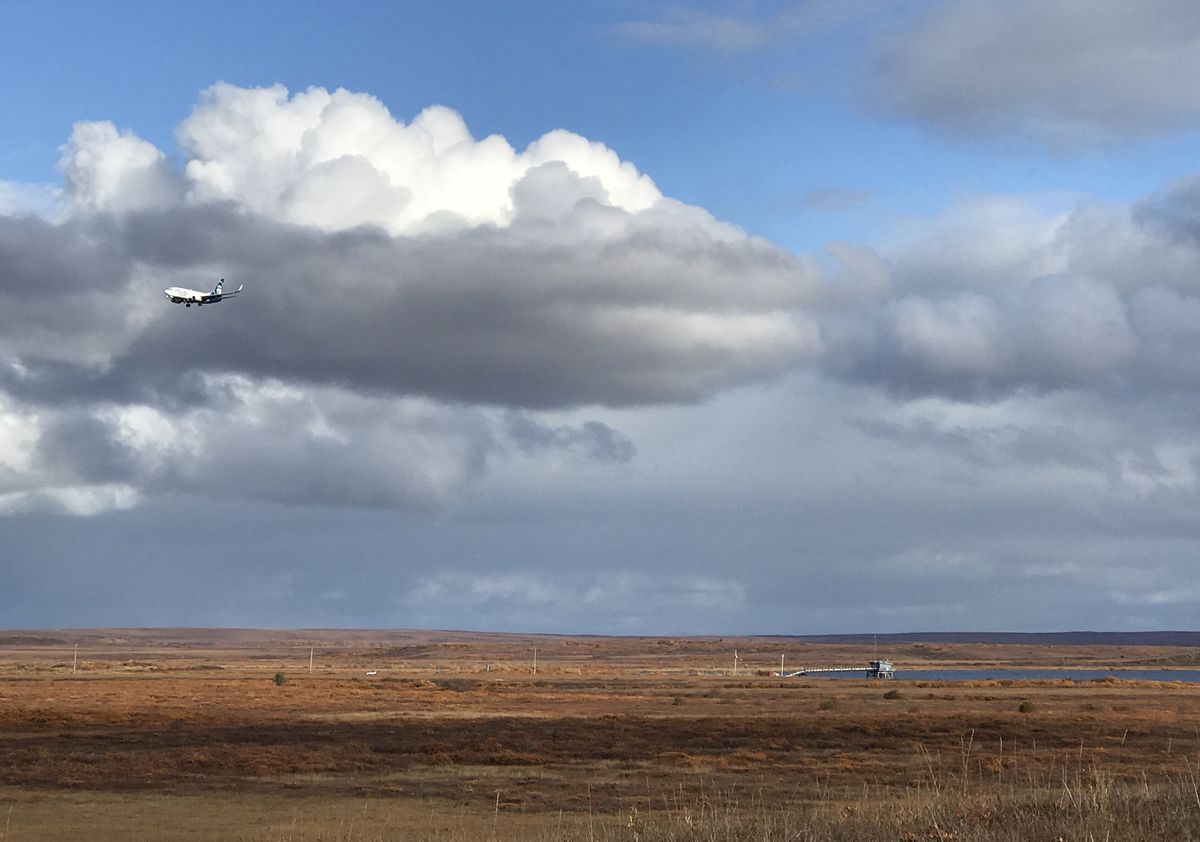 An Alaska Airlines jet makes an approach to Kotzebue over the tundra in the vicinity of where searchers located the body of Ashley Johnson-Barr. (Bill Roth / ADN)

An Alaska Airlines jet makes an approach to Kotzebue over the tundra in the vicinity of where searchers located the body of Ashley Johnson-Barr. (Bill Roth / ADN)

A Kotzebue man linked to a 10-year-old girl’s death through her cellphone pleaded not guilty Friday to lying to federal authorities investigating the case.

After entering his plea in U.S. District Court in Anchorage through an assistant public defender, Peter Wilson was scheduled for a Nov. 19 jury trial. Wilson, 41, is charged with making false statements to the FBI and others as they searched for Ashley Johnson-Barr in Kotzebue.

The girl disappeared Sept. 6, and her remains were found Sept. 14 in rugged tundra accessible only by a four-wheeler or on foot.

According to a federal grand jury indictment filed Thursday, Wilson took a cellphone away from Ashley and lied when he said he found it on the ground. The indictment also alleges Wilson lied about knowing Ashley and using a four-wheeler the day she vanished.

['She knew who he was': Unified by loss, Kotzebue puzzles over arrest in child homicide case]

No one else has been charged in connection with the girl’s death, which authorities say appears to be a homicide. The investigation continues.

Russo also said his office has been in regular contact with the state. He said the state also is considering filing charges.

"They've got their own interest to vindicate," he said. He declined to elaborate on possible state charges.

Cori Mills, a spokeswoman for the state Department of Law, said she was not at liberty to comment on possible state charges.

For the federal charge of making false statements, Wilson faces a maximum penalty of five years in prison, a $250,000 fine and three years of supervised release, according to Russo.

Ashley Johnson-Barr had her cellphone with her when she was last seen playing with friends at Rainbow Park. Authorities say the phone was found later that day in the pocket of a jacket belonging to Wilson, a woman named in the affidavit only by the initials of JJ told authorities. The woman said Wilson often stayed at her home.

Wilson told authorities that he found the phone on the ground about a half mile from the park.

On the afternoon the girl went missing, Wilson also disappeared with a four-wheeler for about two hours, according to authorities. The FBI affidavit said the girl's body was found on tundra outside Kotzebue, in an area concealed by thick alder and willow brush.

After the girl disappeared, Kotzebue residents helped search for her, holding vigils at the park where she was last seen. Similar prayer vigils were held across Alaska. The FBI sent 17 agents to help investigate.