He was slashed at an Anchorage school when he was 8. His PFD has been garnished for years to pay legal fees. 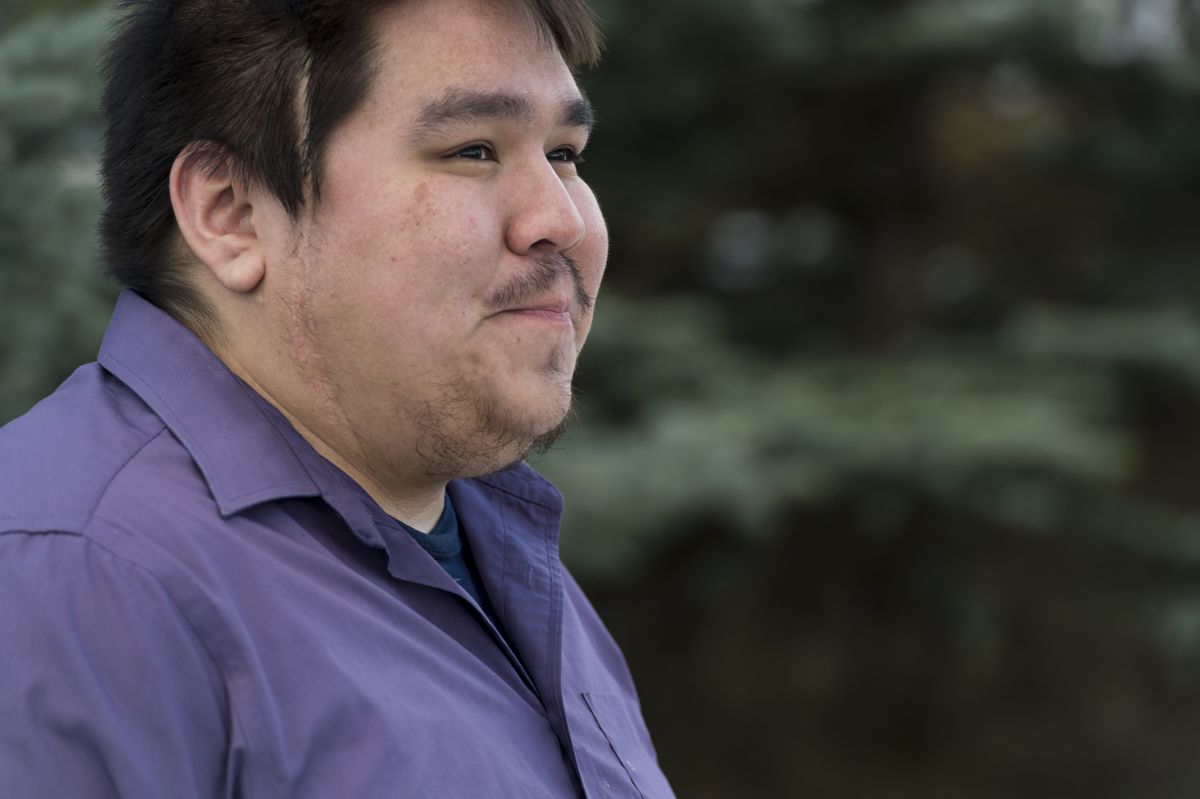 Stephen Hansell, who was slashed by an attacker at an Anchorage elementary school when he was in third grade, said his Permanent Fund dividend is being garnished as a result of legal debts. Photographed in Anchorage on April 23, 2019. (Marc Lester / ADN)

Stephen Hansell, who was slashed by an attacker at an Anchorage elementary school when he was in third grade, said his Permanent Fund dividend is being garnished as a result of legal debts. Photographed in Anchorage on April 23, 2019. (Marc Lester / ADN)

Stephen Hansell was in third grade when a man wielding a knife walked onto the campus of his Anchorage elementary school and tried to kill him.

The May 7, 2001, attack on Mountain View Elementary School sent four boys, including then-8-year-old Hansell, to the hospital with serious injuries. All four survived, but Hansell says the financial fallout of the attack has left his family unable to completely put the trauma behind them.

Eighteen years later, Hansell still lives in Anchorage. He does administrative work for a pediatric clinic at the Southcentral Foundation and says humor, counseling and an active childhood helped him move past his brush with death.

When his attacker, Jason Pritchard, died in the Anchorage Correctional Center in March, it was the first time Hansell had thought about him in years.

“I didn’t know what to think, I didn’t know how to feel about it,” he said. “Some people thought I was mourning. I wasn’t mourning, it was just all those memories that flooded back about what happened."

Hansell, now 26, said he remembers running into a classroom and hiding under a desk after then-33-year-old Pritchard, a man with a history of mental illness and religious delusions, tried to slit children’s throats outside the school. He remembers being suddenly dragged out by his ankles and slashed across the right side of his face from scalp to neck, a cut that damaged a facial nerve.

That wound has healed, leaving a scar Hansell said is most visible when he cuts his hair short. What hasn’t gone away, though, is the financial burden of the attack, he said.

In 2014, Hansell said, he and his parents stopped receiving their Alaska Permanent Fund dividends. Garnishment was nothing new to him, he said — part of his dividend had already been withheld to pay student debts.

What didn’t add up was the case number that appeared when he tried to check his dividend status, he said. That prompted his father to call the court system.

“The way he was told was, ‘Oh yeah, it’s to pay for defense fees, and when are you going to pay?’ ” Hansell said.

No one had told him he’d been named as a party to a lawsuit stemming from his attack, that he had lost the case, and that he was expected to pay for it.

All three families whose children were injured in the attack went to court against the public institutions and mental health providers they felt were responsible for placing their children in danger. Dwayne and Mary Hansell, Stephen’s parents, were the first to file.

Their complaint, filed in January 2002, took aim at two primary parties: the Anchorage School District, which they accused of failing to provide supervision and protection to the unattended students who were attacked, and the Alaska Psychiatric Institute, which had treated Pritchard twice before the attack.

The Hansells claimed the hospital had failed to “evaluate Jason Pritchard as a danger to others though the threat was clear," according to the complaint.

The first time Pritchard was admitted to API in 1997, he professed to having “impulses to harm children,” according to an order in the case.

He was discharged later that year and returned voluntarily in 1999, claiming he was having thoughts of committing suicide by starving himself, the order said.

His thoughts of harming children also returned during that five-month stay, but the providers who treated him claimed those symptoms had abated by the time he was released early in May 2000.

“They knew he was crazy, he was a danger to society, and to let him out, that just — I don’t know," said Dwayne Hansell.

The Hansells’ case, which sought $100,000 in compensatory damages from each defendant, didn’t wind up going to trial, though. Instead, U.S. District Court Ralph Beistline granted a summary judgment in favor of API in 2004, bringing the case to an abrupt end.

According to Beistline’s order granting the motion, the Hansells and their co-plaintiffs couldn’t prove API’s providers knew when they released Pritchard that there was a high probability he would harm others.

About six months later, the claims against the school district were also dismissed.

Beistline declined an interview recently, saying through his judicial assistant that he doesn’t remember the case and doesn’t have ready access to the case file.

On the hook for the bill

Then came the bill. Nearly three years of litigation had racked up a hefty tab. The state’s defense costs alone exceeded $90,000, according to an attorney’s affidavit, with most of that coming in the form of attorney fees.

In Alaska, the losing party is on the hook for paying part of those costs if the winning party asks for it.

“Usually then what happens is then there’s a negotiation regarding either the amount or whether it needs to be paid at all,” said James Wendt, the Hansells’ attorney.

Often, Wendt said, prevailing defendants will negotiate a deal with plaintiffs promising not to seek attorney fees if the plaintiffs agree not to appeal the case.

That, he said, is what happened here. Each of the defendants agreed to waive the fees, and Wendt agreed not to appeal, he said.

Among those he claimed gave him a written agreement to that effect was Paula Jacobson, the state attorney representing API. In 2006, however, Jacobson asked the judge to order the Hansells to pay, and the motion was granted -- to the tune of more than $24,000.

Jacobson, who is now in private practice, declined a request for an interview with an email saying, “Unfortunately, I can’t be of assistance.”

When asked in an emailed response why she couldn’t be of assistance, Jacobson didn’t respond.

Dwayne Hansell said he didn’t know about either the judgment or the debt until he received a call from the court asking him to pay thousands of dollars. Initially, he had no idea what it was for, he said.

“At the time, my wife wasn’t working and we were stretching it as it was, and they wanted some sort of payment plan," he said.

Then, in 2012, the state moved to garnish the Hansells’ Permanent Fund dividends to pay toward the debt — not only Dwayne’s and Mary’s dividends, but Stephen’s as well, as he had also been named as a plaintiff.

Wendt said he couldn’t recall why he decided to name Stephen as a party, but claimed it’s not an uncommon practice when a lawsuit involves a child.

Stephen, for his own part, said he doesn’t feel any resentment toward his parents for involving him in the case, though that doesn’t change his frustration with the courts.

“I broke down immediately after finding out what was going on because, it’s like, they’re doing this and I was the one who was attacked," Stephen said. “For me, it feels like I didn’t do anything.”

PFD garnishment isn’t uncommon. The Permanent Fund Dividend Division received 410,949 garnishment requests in 2018, with more than 34,000 of those coming from the Clerk of Court in Anchorage, according to the agency’s annual report. Statewide, the requests totaled more than $762 million.

However, none of the attorneys the Daily News spoke with for this article knew of another case where a court judgment had led to the garnishment of a child crime victim.

Court documents show Wendt tried to fight the garnishment, alleging he had lost the letter Jacobson had sent him agreeing not to seek attorney fees.

He also argued that it was unfair the Hansells, who had joined their lawsuit with those of the two other victim families, were the only ones ordered to pay, according to an affidavit.

In the end, though, the judge sided with the state, which called Wendt’s argument “late and procedurally inappropriate.”

Had the case been brought in a different state, the bill might not have been a problem for the Hansells. Generally, a losing party in the United States doesn’t bear the cost of paying the winning party’s attorney fees except in certain kinds of cases, according to Kristen Knudsen, an associate professor of legal studies at the University of Alaska Anchorage.

Alaska is different, though, she said. Here, prevailing parties can seek partial attorney fees from their losing opponent in most cases, with the idea being that the potential financial consequences would encourage settlements, Knudsen said.

“If you know that you could be liable not just for your own attorney’s fees but part of the other side’s attorney’s fees, you might be willing to settle your cases,” Knudsen said.

What that also means, though, is that there’s nothing stopping victims of violent crime from being saddled with legal debts if they lose civil cases related to their attack.

While crime victims in Alaska do have certain rights that are spelled out in the state constitution, those rights pertain only to the criminal justice system, said Taylor Winston, director of the Alaska Office of Victims’ Rights. That’s because in criminal cases, victims don’t technically have legal standing — it’s the state, not the victim, that prosecutes the case, she said.

“They’re subject to all the same civil rules and benefits and risks as any other person who engages in civil suits,” Winston said.

Because of that, not much recourse exists for the Hansells, according to Wendt. Unless they make some kind of lump sum payment, their dividends will likely continue to disappear, he said.

As of October 2016, the most recent date on which a full ledger of their balance was filed in court, they still owed more than $19,100.

For Stephen, the next step is to find out as much about his case as he can. He emptied the courthouse printer trying to retrieve his full case file, he said, hoping that somewhere in there are the answers he’s looking for — whether that’s a path to getting his dividend back or an explanation for the judgment that was handed down.