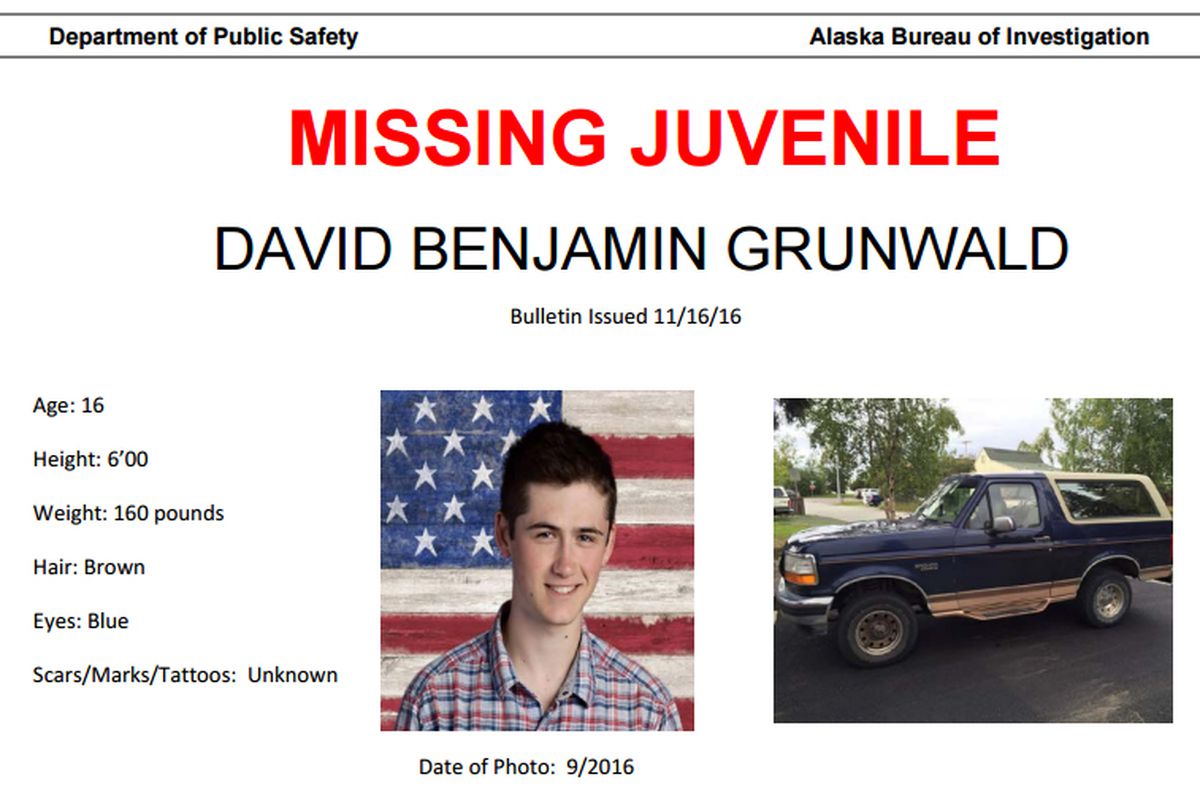 A missing poster shows David Grunwald and his 1995 Ford Bronco in November 2016. One of four teens charged in his murder described the fatal shooting Monday, Sept. 30 2019 during his trial in Fairbanks.

A missing poster shows David Grunwald and his 1995 Ford Bronco in November 2016. One of four teens charged in his murder described the fatal shooting Monday, Sept. 30 2019 during his trial in Fairbanks.

The teens walked into the woods with 16-year-old David Grunwald on a cold dark night in November 2016, the silence broken only when 19-year-old Austin Barrett racked his pistol.

That’s the story recounted by Bradley Renfro, 18 now, as he testified at his murder trial Monday about the last moments of Grunwald’s life that night off Knik River Road. The trial is being held in Fairbanks.

“He just shot David right there, and after that Austin just ... we all stood there for a second,” Renfro testified. “Austin just kind of stared at David for a second.”

[A third trial in the killing of a Palmer teen is underway. But this time it’s in Fairbanks.]

Grunwald had been hit in the head with a pistol by Dominic Johnson before the teens loaded him into his own Ford Bronco and drove him out to Butte, Renfro testified last week. KTVA 11 News is streaming the trial.

The beating occurred with Erick Almandinger’s heavy Ruger pistol in a trailer behind Almandinger’s home in Palmer. Grunwald, who knew Almandinger but not the others, came over that night to smoke marijuana. The Bronco was found torched at the foot of the Talkeetna Mountains the day after Grunwald went missing.

The boys left Almandinger’s in the Bronco, with Grunwald in the back seat. Renfro testified he heard Barrett say “I’m gonna do this" as they drove and realized that Grunwald was going to be killed. They parked in a pullout along Knik River Road.

After the shooting in the woods, Almandinger ran for the Bronco, followed by Johnson at a jog, Renfro testified Monday. Barrett stayed behind briefly, then walked out after glancing back at Renfro.

Renfro said he heard Grunwald fall but didn’t check for a pulse. He turned and headed back.

He took the stand in his own defense last week. Almandinger and Johnson have already been convicted but not sentenced. Barrett faces his own trial next year.

Prosecutors say all four of the teens are guilty of murder based on their willing participation. Renfro’s attorney says his actions were motivated by fear of the others.

Palmer District Attorney Roman Kalytiak began his cross-examination of Renfro on Monday afternoon, asking him how he could prove he didn’t kill Grunwald. There is no evidence who fired the fatal shot.

Kalytiak also pointed out that Renfro told four different stories of what happened, starting with three Alaska State Trooper interviews and ending with his trial testimony. He initially said he was too drunk to remember, then that he was picked up after the shooting, then blamed it all on Almandinger, and most recently testified Johnson did the beating and Barrett the shooting in court.

“How are these people supposed to know when Bradley Renfro is telling the truth or when he’s lying?” Kalytiak said, referring to the jury.

Renfro admitted he lied to investigators. He’d already testified Barrett threatened them on the drive away from the shooting, and he was frightened he could get killed for talking about what happened.

But he testified Monday he was the one who lit the Bronco after he and two of the others doused it with gasoline.

The teens got gas cans at the Big Lake home of Devin Peterson, already sentenced for his role helping them. Renfro suggested getting the cans at Peterson’s, he testified, because he didn’t want the others to think he was reluctant to participate.

Renfro bought the gas used to burn the Bronco. He testified Johnson told him that was his job “because I hadn’t participated in this anywhere” and he didn’t feel like he had a choice. He also said he stayed outside when Almandinger and Johnson later cleaned Grunwald’s blood from Almandinger’s trailer with bleach and burned a rug they took from inside.

Almandinger, Johnson and Renfro got a cab back to a shed where Renfro was staying. Videos showed them partying after the murder.

At the end of Renfro’s direct examination Monday, his attorney Chris Provost asked why he volunteered to testify.

He said he did it to explain “what really happened that night" because no other defendant told the truth, and “maybe even closure for the Grunwalds.”