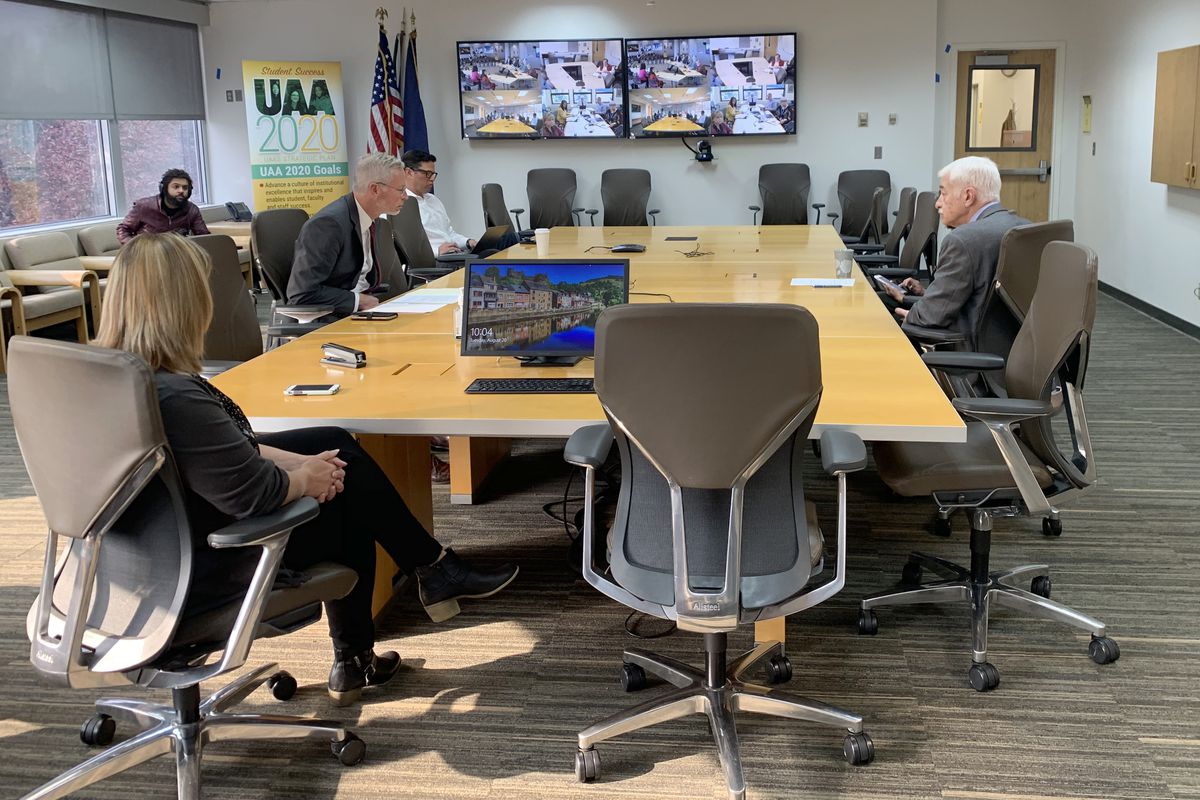 The University of Alaska Board of Regents canceled its declaration of financial exigency on Tuesday, Aug. 20, 2019. Regents attended the meeting from across the state, some called in and other attended by video conference. At the University of Alaska Anchorage, UA President Jim Johnsen, UA Regent Andy Teuber and UAA Chancellor Cathy Sandeen, among others, joined the meeting. (Tegan Hanlon / ADN)

The University of Alaska Board of Regents canceled its declaration of financial exigency on Tuesday, Aug. 20, 2019. Regents attended the meeting from across the state, some called in and other attended by video conference. At the University of Alaska Anchorage, UA President Jim Johnsen, UA Regent Andy Teuber and UAA Chancellor Cathy Sandeen, among others, joined the meeting. (Tegan Hanlon / ADN)

University of Alaska regents have canceled their declaration of financial exigency, a decision that will slow down the speed of job cuts and program eliminations at the public university system.

The regents voted 10-0 to terminate their declaration during an emergency meeting Tuesday, the day after Gov. Mike Dunleavy signed a bill that added back $110 million in state funding for UA, leaving a $25 million cut. It’s the regents’ first vote since Dunleavy’s sharp shift in his position on state funding for the university system.

“I think it is important to take this cloud off of us,” said regent Lisa Parker before Tuesday’s vote.

Financial exigency is an extreme and uncommon step taken by universities in a financial crisis. It allows university officials to more quickly lay off employees and end academic programs.

On July 22, regents had originally voted to declare financial exigency in the face of a $135 million state funding cut — $130 million vetoed by Dunleavy and a $5 million cut approved by the Legislature. That declaration dealt a blow to the university system’s reputation, critics say.

Then, Dunleavy announced last week that he’d agree to the Legislature’s proposed $25 million cut for UA for the fiscal year that started July 1. That’s about an 8% cut to UA’s state funding compared to last year, and 3% of last year’s total operating budget, including other revenues such as tuition.

Dunleavy said he also intends to cut UA’s budget by another $45 million over the following two years.

“We’ve been given the luxury of a three-year glide path and a reduced target of (a) $70 million reduction in state funds. But remember, it is a $70 million reduction," said regent Dale Anderson. “I don’t want us to be lulled into an assumption that all is well because this year’s cut is only $25 million.”

The state of exigency “may raise its ugly head” next year or the year after that, he said.

[Gov. Dunleavy and a key University of Alaska leader signed a 3-year compact. What does it mean, and what happens now?]

Regent Karen Perdue said financial exigency is meant for “the most dire situations,” which the university system had faced a month ago. She said she hoped faculty and staff will continue to participate in discussions about the future of UA under three years of cuts.

“In some ways the lifting of exigency requires us to be even more rigorous in our approach to looking at a new university because we don’t have the luxury of time, even though it might seem as though we do,” Perdue said. “But we will treat our employees fairly and we will honor our contracts.”

UA President Jim Johnsen said the university system had yet to issue layoffs this year under the terms of financial exigency.

He had recommended that the regents reverse their prior declaration in response to the smaller funding cut. Their vote Tuesday, he said, “is very good news” but spending reductions still need to be made soon.

“So on the upside, this relaxes the pressure, just a small amount, but in a paradoxical way it actually turns the pressure up because over three years we anticipate a $70 million state funding reduction and without financial exigency we go through the standard, very time-consuming processes to evaluate academic programs prior to employment decisions, personnel decisions, restructuring decisions being implemented,” he said.

“It’s good for us, it says we’re not in an emergency any more,” she said. “We’re more back to normal, even though we have a budget cut that we’re taking very seriously.”

Faculty members have said this year’s declaration of financial exigency led to feelings of increased instability and fear. Under financial exigency, UA had to provide tenured faculty with 60 days’ notice of a layoff instead of one year. Some have also said the declaration was made too soon and without enough input.

Even though it lasted for only about a month, it hurt UA, damaging morale and turning students away, said Maria Williams, a UAA professor of Alaska Native studies who chairs UA’s Faculty Alliance.

“I think it’s going to take a while for people to feel, I guess the word would be safe or secure, given the fact that if the board could declare it that quickly, without really knowing our budget, it means they could do it again,” she said.

Johnsen said Tuesday he continues to work on a plan to consolidate the university system under a single institutional accreditation, a controversial proposal. Regents are expected to consider that plan at their meeting Sept. 12-13 in Anchorage.

Before that, a regents subcommittee on UA’s structure is scheduled to meet in Fairbanks on Aug. 28 from 1 to 3 p.m. On Sept. 9 at 4 p.m., regents will have a statewide call for people who want to give public testimony.