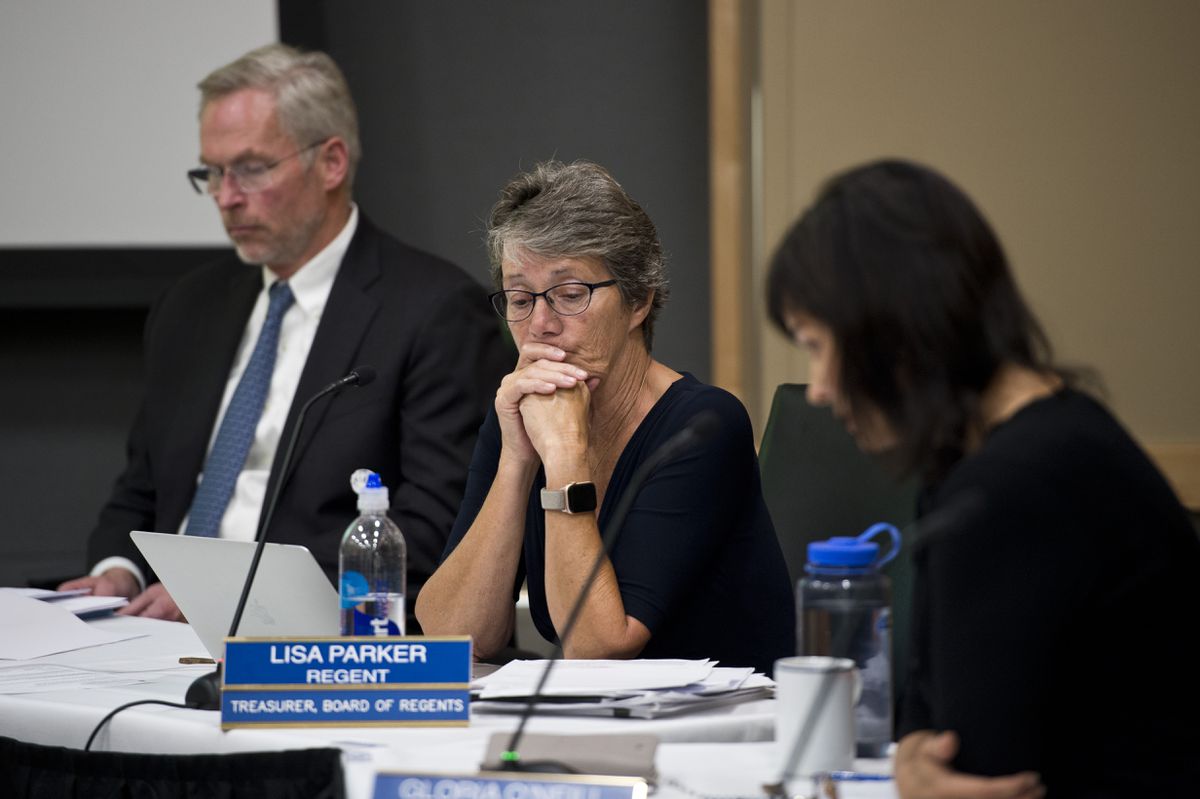 Regent Lisa Parker, center, listens to discussion before the vote. The University of Alaska Board of Regents voted to declare financial exigency on Monday, July 22, 2019, during a meeting at UAA's Gorsuch Commons. (Marc Lester / ADN)

Regent Lisa Parker, center, listens to discussion before the vote. The University of Alaska Board of Regents voted to declare financial exigency on Monday, July 22, 2019, during a meeting at UAA's Gorsuch Commons. (Marc Lester / ADN)

University of Alaska regents on Monday voted to declare financial exigency, a step they described as difficult but necessary to deal with an unprecedented 41 percent cut to state funding.

“Unfortunately we are, right now, grappling with survival,” UA Board of Regents chairman John Davies said at the emotional Anchorage meeting.

Regents approved the declaration in a 10-1 vote with Lisa Parker opposed. Exigency allows UA officials to more quickly downsize in the face of a financial crisis, including eliminating academic programs and laying off tenured faculty. Davies called it a tool, not a plan. It’s the regents’ first step as they determine how to close the gaping budget hole left by Gov. Mike Dunleavy’s veto.

“Yes, it’s unprecedented, financial exigency, but given the very poor hand we are given, sadly it is the only tool available to us, and I think it will enable us to build a plan,” UA President Jim Johnsen told regents.

Cuts compound if decisions are delayed

In total, Dunleavy vetoed $444 million from the state operating budget on June 28, cutting spending to move closer to a balanced budget while avoiding new taxes or reducing Permanent Fund dividend checks. Dunleavy’s cuts are in addition to the more than $100 million in reductions made by the state Legislature.

The cuts took effect in the fiscal year that started July 1.

“We will not have a university after February if we continue to move forward without making a decision,” said regent Gloria O’Neill.

Regents had voted earlier this month to postpone a decision on financial exigency until the end of July, hoping they’d have a clearer picture of whether state lawmakers might reach a deal and restore at least part of the funding cut by Dunleavy.

“I would celebrate to the stars if things got reversed,” Davies said.

Then the news came last week that Moody’s Investors Service had downgraded UA’s rating by multiple notches due to “the severity and magnitude of the financial challenges confronting University of Alaska.” That makes bonding and borrowing money more difficult and expensive, Johnsen said.

Regents moved up the decision on exigency to Monday.

Hours after their vote, the House Finance Committee approved a bill that would reverse $110 million of Dunleavy’s $130 million budget veto for UA, resulting in just a $25 million cut. The full House was scheduled to vote on the proposal Tuesday.

If legislators approve the bill, the money would still have to survive Dunleavy’s veto pen.

In a letter to employees last week, Johnsen wrote that given legislators’ failed veto override vote, the governor’s interest in reducing state funding for UA and his veto power, “there’s no uncertainty that the university will face a substantial reduction.”

In February, Dunleavy had introduced a similar cut for UA in his budget proposal, suggesting axing $134 million in state support for the university system, though he had made no indication of the cut during his campaign for governor in 2018.

A document from the governor’s office explaining his more-recent veto to UA says the university system is too dependent on state funding and it has too many high-paid executives, too many duplicative programs and outcomes that are too poor. Johnsen has said that document lacks proper context.

‘The hardest vote to date’

On Monday, regent Cachet Garrett called on UA to engage with students and faculty about how the university system should cut the budget. Garrett wiped away tears while discussing financial exigency.

Garrett said she would put the students first.

Parker, the only regent who voted against exigency, said campuses had already started to reduce costs in February after learning of Dunleavy’s budget proposal, and she hoped the administration had too.

“I don’t see through this declaration that we’re going to be able to be saving $11 million a month to reduce that burn rate,” she said.

If funding circumstances change, the declaration of financial exigency can be modified or withdrawn, Davies said.

Exigency basically means that UA’s expenses exceed its revenues and it can make cuts with less notice. For example, instead of providing tenured faculty a year’s notice of a layoff, the notice period is 60 days.

Susan Whealler Johnston, president and chief executive of the National Association of College and University Business Officers, said in an emailed statement Monday that exigency is “an unfortunate state” for any university and its community.

“It is a desperately sad state of affairs for public higher education in our nation that the University of Alaska is forced to face it,” she said.

“Done well, financial exigency at least allows an institution time to make hard decisions in a thoughtful manner,” she said. “Done poorly — that is, without enough time to make the necessary decisions carefully — financial exigency can result in disadvantaging students, mishandling the termination of faculty and staff, adversely affecting the community surrounding the institution, and damaging the institution’s reputation.”

UA President Jim Johnsen said the revenue loss will be even higher than $135 million.

The decreased state funding is expected to lead to decreased enrollment, lost tuition and fewer faculty competing for research grants, according to UA. Once those losses are taken into account, the cut will likely total closer to $200 million, Johnsen said. For scale, the entire University of Alaska Anchorage campus receives about $120 million in state funding.

For the fall semester, the plan is to not interrupt degree programs, Johnsen has said. Most reductions will first occur at the administrative level, he said, and then any academic changes will go into effect in spring semester.

Regents will next meet on July 30 to discuss what a smaller UA would look like under the budget cut.

They asked on Monday for more information on two new structuring options:

• Proportionately distributing the $135 million state funding cut to UAA, UAF, UAS and statewide administration. This would retain UA’s current organizational structure and would maintain some access to higher education to a large number of Alaskans, according to Monday’s presentation by Johnsen. But it could also put each university’s accreditation and financial viability at risk, it said. The chancellors of the three universities appeared to support this option on Monday.

• Create a “New UA,” shifting from three separately-accredited universities to a multi-campus system with a single accreditation like the University of Washington. That could lead to the elimination of duplicative units and programs and reduce administrative overhead, according to the presentation. But it would require significant change in institutional accreditation, it said. Johnsen said he supported this option.

Specific program reductions will be proposed at regents’ September meeting, according to UA’s timeline. Lay off notices would then go out to impacted staff and faculty.

“I think we’re unfortunately in the position of planning for the worst and hoping for the best,” Davies said. “This is a devastating schedule but I think, unfortunately, if we go any later than that it just gets worse.”