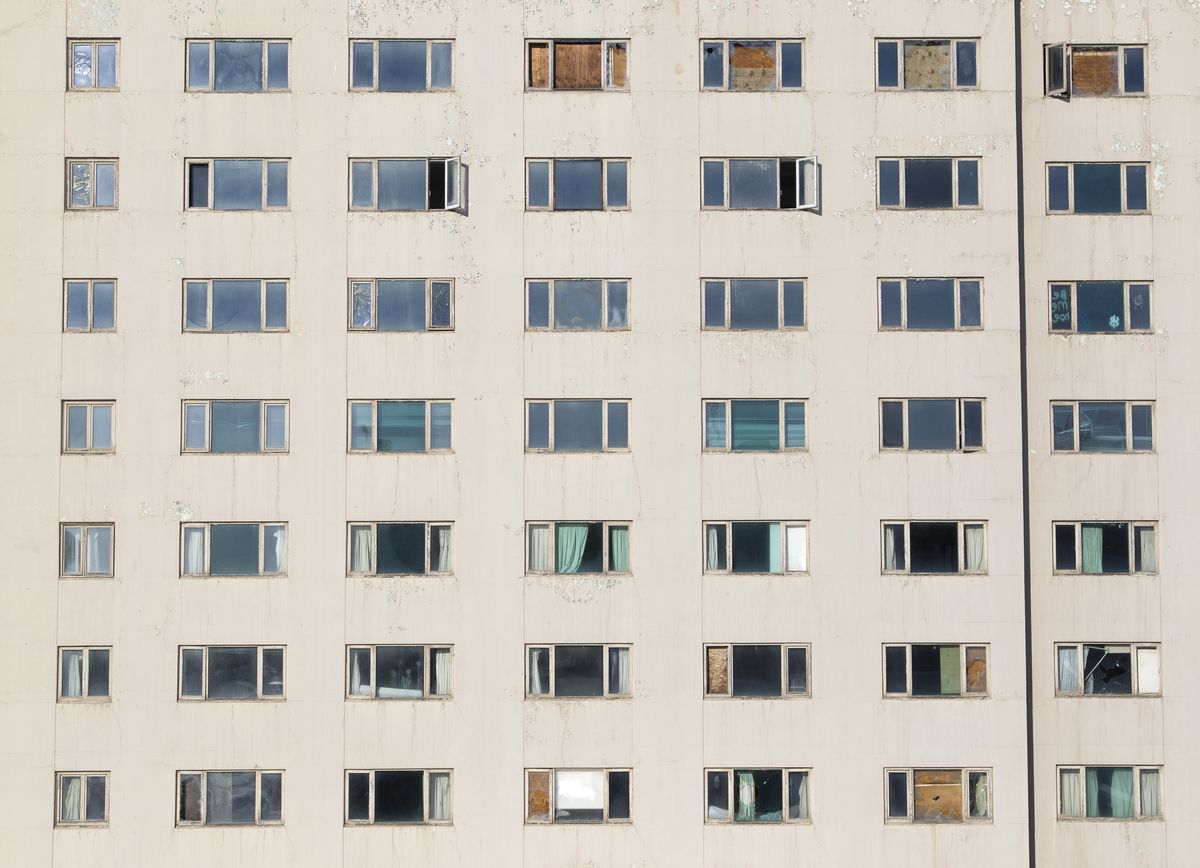 Windows of the Polaris Building were boarded up after repeated reports of people entering the hazardous building. (Rugile Kaladyte / Alaska Dispatch News)

Windows of the Polaris Building were boarded up after repeated reports of people entering the hazardous building. (Rugile Kaladyte / Alaska Dispatch News)

FAIRBANKS — At 11 stories, the Polaris Building is easy to spot. It's the tallest building in town, and its dulled tan exterior and boarded windows clearly show it has sat vacant for a long, long time.

Built in 1952, the Polaris Building's story is laced with failed attempts at redevelopment. Its owners have made big promises, but they've fallen by the wayside. Nobody goes inside the building anymore, except people who climb in illegally through the windows or pry open the boarded-up doors.

More than 16 years after the building shut down, the city may finally be nearing its chance to wipe the structure from the skyline — and maybe boost downtown's economy.

Pat Smith, Fairbanks' city property and development manager, can see the building from his office on the second floor of City Hall. He jokes that he likes to keep watch over it. But in all seriousness, he wants the building gone.

"It's a visual drag on the downtown. People are tired of looking at this eyesore," Smith said.

The people who run nearby businesses agree — they'd like to see something that invigorates the area, instead of detracting from it.

"It does give that unsafe feeling when people are walking downtown," said Steve Johnson, market manager for outdoor clothing company Big Ray's.

Smith was the last person to legally set foot inside the space on Second Avenue, across from the Rabinowitz Courthouse. In October, he ventured into the building clad in a suit and respirator to protect him from asbestos exposure.

What he saw was decades of decay and disrepair.

"The building is sort of melting, you know, plaster is sort of disintegrating and falling off," Smith said.

Chairs, tables and beds are still scattered throughout the space. Originally apartments, the building was later converted into a hotel before shuttering its doors.

Smith spent about four hours in the building that's long been a health hazard. Asbestos has been found in the ceiling plaster. Black mold coats some walls. On the top floor, green fungus consumes the floor of what was once the old Tiki Cove, and later the Raven's Nest restaurant.

"This carpet's not green, but it is now," Smith said as he flipped through photos on his computer.

Drawing from those photos, Smith will draft an estimated weight of all the objects in building so bidding proposals are accurate.

But his visit was just a first step — the city still needs to figure out the full extent of the hazardous materials. Just how much asbestos is still unclear. There's likely lead paint and maybe PCBs, Smith said.

The Environmental Protection Agency will be lending a hand, assisting with a comprehensive survey of the building, a necessary step before it can be torn down.

Fairbanks mayor Jim Matherly doesn't like the idea of ripping down a building with so much history. But the structure is too far gone.

"I don't think ghosts would even hang out in there," Matherly said.

Matherly used to spend a lot of time at the Polaris Building in the 1970s. On the top floor, the Tiki Cove was a popular Asian restaurant, he said. He has vivid memories playing the drums alongside the house piano player when he was a child.

But by 2000, the hotel was failing. It shut down that year and the building was foreclosed in 2003. Anchorage developer Marc Marlow purchased the building from a private lender, Smith said.

Marlow is a well-known developer whose renovation of the old Anchorage MacKay Building, now known as the McKinley Tower Apartments, was heavily covered by media. Later, he was sued by the Anchorage Housing Finance Corp., which said he owed them millions.

For the Polaris Building, much like the MacKay project, Marlow sought waivers and tax credits from government agencies. In 2010. Marlow was quoted by the Associated Press as saying, "The project is like pushing water uphill," but that he remained optimistic.

Marlow is not the first developer to place his bets on the decaying building. In 1996, former owner Mike Cusack Jr. told the Anchorage Daily News that he planned to reinvigorate what had been a losing enterprise. Cusack took the reigns from John Hovenden, who told the Daily News he had encountered far more obstacles and expenses than expected. Before that, the building sat in bankruptcy for three years.

The Polaris Building has drawn comparisons to Anchorage's Northern Lights Hotel, another decrepit structure with a troubled history. The Northern Lights Hotel shut down in 2002. After the city threatened last fall to fine the owners for violating local derelict building laws, they agreed to tear it down.

The story of the Northern Lights Hotel is important to Smith because it seems to confirm his suspicions: If developers can't make a smaller hotel financially feasible in the far-larger Anchorage economy, the Polaris Building doesn't stand a chance, Smith reckons.

"It's no leap of logic to look at a bigger problem in Fairbanks and draw the same conclusion," Smith said of the Northern Lights' demolition.

Marlow's 2003 purchase went nowhere. In 2011, a massive "Looking for Love" banner was draped across the building, in an art project calling attention to the space.

The building was condemned in September 2012, while the banner was still hanging.

A one-year deadline to renovate or demolish the building was later extended. Marlow told the council he was planning to raise $19 million to remodel the building, the Associated Press reported in September 2013.

But the Polaris still sits in disrepair. Marlow could not be reached for comment for this story.

If the building were smaller, it would already be demolished, said city council member David Pruhs.

Pruhs formed the Polaris working group in September 2015, to figure out the next step for the building. He was tired of hearing what he considered empty promises, he said.

But the demolition is estimated at between $5 million and $8 million, Pruhs said — magnitudes more than the $50,000 the city puts aside for demolitions every year.

"If we had the money it'd be gone," said Smith of the building.

The city's total budget is $36 million, Pruhs said. One structure can't comprise upward of 13 percent of the entire budget.

The city hasn't really considered implementing a tax to fund the project, according to the mayor.

Pruhs is hoping to get federal agencies to throw down millions to remove the structure and build Fairbanks back up. He's pitching an economic redevelopment plan that encompasses two city blocks. He listed off the EPA, the Federal Emergency Management Agency or the Department of Housing and Urban Development as possible federal partners.

"This is the ground zero for downtown development," Pruhs said of the space.

Heading into summer, a few scenarios could play out.

If Marlow doesn't pay $50,000 in back taxes by May 28, the Fairbanks North Star Borough will assume ownership of the building and foreclose, Smith said.

A second option is for the city to buy the building. In May 2016, the city council gave itself the option of buying the deed from with the deed holder, James Baum. Baum is the trustee for Marlow, who owed $250,000 to Baum, the Fairbanks Daily News-Miner reported at the time. But the city won't buy the deed unless funding for demolition was secured, Smith said.

Matherly said he used to have regular contact with Marlow, but hasn't spoken to him since this fall.

"When the contacts stopped, that's kind of when I figured out maybe he sees the writing on the wall," Matherly said.

A third option is Marlow could pay what he owes, pushing back his deadlines to potentially move forward with the project.

City officials aren't holding their breath. "I have zero faith that it will be restored," Matherly said.