Another Sand Point fisherman is chomped on by a sea lion 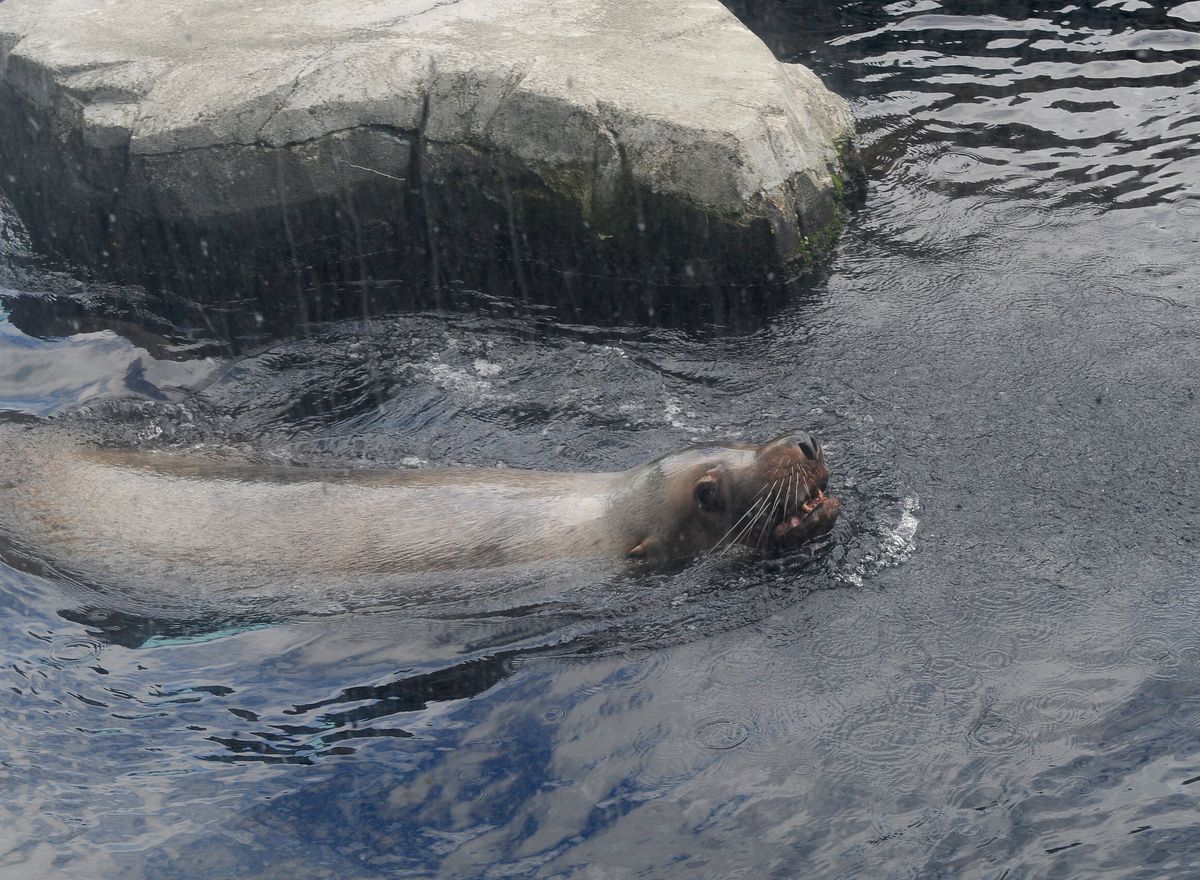 A sea lion swims in a tank at the Alaska SeaLife Center in Seward on May 4, 2017. (Bob Hallinen / ADN archive)

A sea lion swims in a tank at the Alaska SeaLife Center in Seward on May 4, 2017. (Bob Hallinen / ADN archive)

The attack happened around 4:30 p.m. Sunday.

“The sea lion came out of the water on the back of the fishing boat Celtic and bit a male fisherman on the right thigh,” said Sand Point police officer David Anderson.

Other crew members took the man to the clinic, where he was treated and released, Anderson said.

All three attacks in Sand Point have involved fishermen bitten on the leg by a Steller sea lion.

A similar incident happened last fall, the officer said, when a sea lion bit someone on a fishing boat. A third fisherman was bitten in the harbor in January 2017.

The city’s Department of Public Safety on Monday morning posted a warning on Facebook: “Please be careful walking around the docks in the harbor. We had another reported sea lion bite.”

Later that day, more details emerged when the city shared information from someone who apparently interviewed the boat’s captain: With the Celtic tied up in the harbor, the crewman was helping pull a pollock net off a drum when the sea lion lunged up the stern ramp and bit him. Then it tried to drag him into the water.

The crewman, who stayed on the boat as the animal yanked on him, spent six hours at the clinic getting stitched up.

The crewman couldn’t immediately be reached for comment Wednesday.

The prior attack, in January 2017, also involved a fisherman bitten in the calf while he worked on a boat. He reported the animal tried to drag him in the water, too. Doctors in Anchorage told him the gaping wound looked like a bear bite.

It’s unclear whether the same animal was behind any of the attacks.

Nearly 600 miles from Anchorage, Sand Point is on the northwest portion of treeless Popof Island, part of the Shumagin Island group south of the Alaska Peninsula. It’s home to about 1,000 people.

Sea lions, carnivorous marine mammals that prey on salmon and other fish, live throughout Alaska. Steller sea lions in the southwestern part of the state, especially along the Aleutian Islands, are protected as endangered.

An adult female weighs about 550 pounds while males can weigh 1,200 pounds or far more.

The National Oceanic and Atmospheric Administration is charged with protecting sea lions under the Endangered Species Act.

For years in coastal communities, sea lions' habit of munching lucrative fish -- not to mention spooked humans -- has set up a conflict between people wanting to eradicate aggressive animals and federal protections that govern their management.

A Cordova fishing boat captain and deckhand were convicted of killing sea lions after 15 dead Steller sea lions were found at the mouth of the Copper River at the start of the 2015 salmon fishing season.

Run-ins with aggressive sea lions generate one or two reports a year, NOAA officials have said. The agency began tracking such incidents in 2017.

No one was available to provide updated statistics this week due to the partial federal government shutdown.

Kathy Adams, who manages a Sand Point bed-and-breakfast, said she should tell her husband to take a gun with him when he fishes commercially for salmon from their unprotected skiff.

Update: This story was updated to reflect that Kathy Adams said she should tell her husband to take a gun with him, not that she tells him to take a gun.

After 3 days, ‘stressed’ sea lion that ventured into Sitka can’t find its way back to the ocean

After spending days aground in Sitka, a sea lion returns to the water – with help from humans