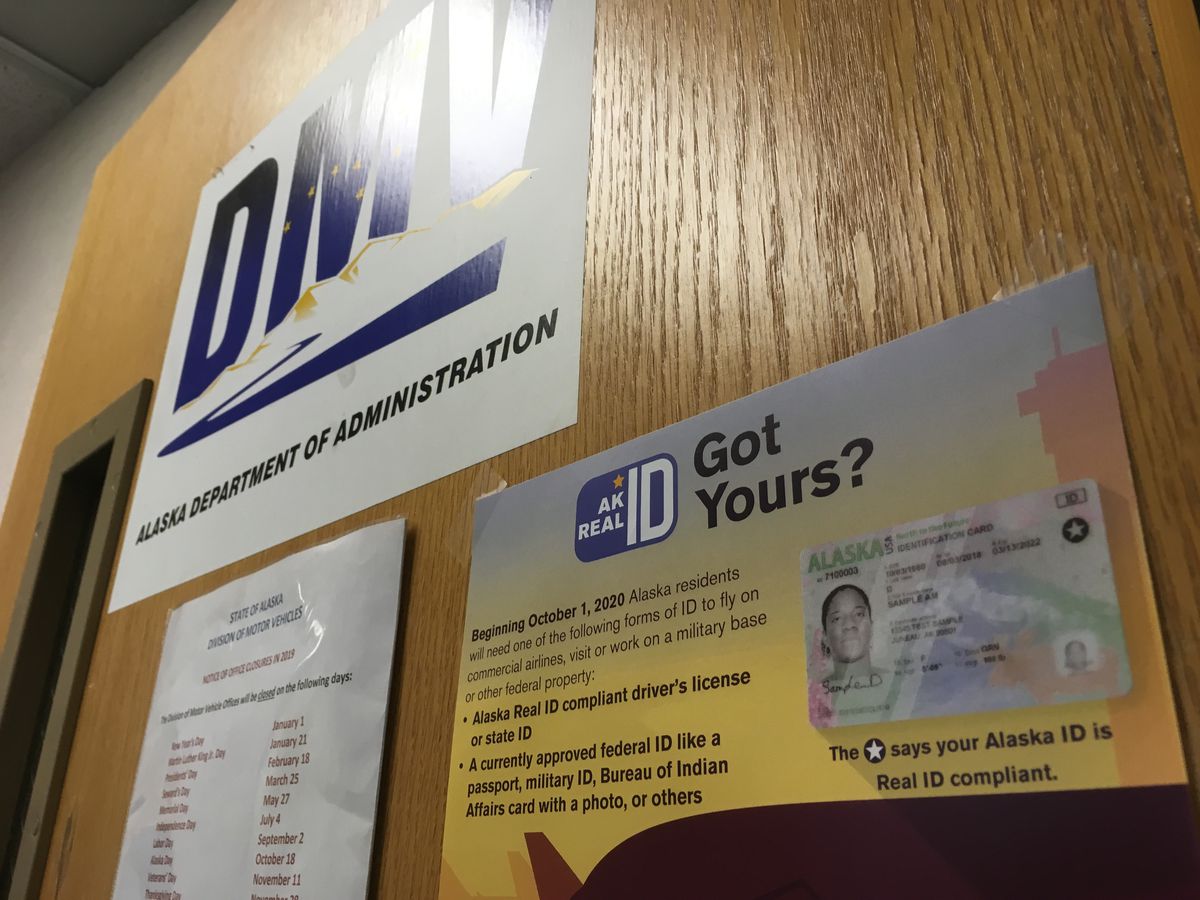 Signs explaining the Real ID program are seen at the Alaska Division of Motor Vehicles office in Juneau. (James Brooks/ADN)

Signs explaining the Real ID program are seen at the Alaska Division of Motor Vehicles office in Juneau. (James Brooks/ADN)

The state is no longer fundraising to send Department of Motor Vehicles employees to 100 rural Alaska communities to implement the Real ID program and will instead visit communities that can finance the visit.

“What we realized as we talked to these communities with unique circumstances is that there is less of a need than we initially thought there was because so many of these communities have alternative forms of identification," said Acting DMV Director Jenna Wamsganz.

Starting Oct. 1, a Real ID is needed instead of a normal driver’s license to board commercial flights, enter federal buildings or enter a military base. Passports and military or tribal ID cards will still be accepted, however.

Wamsganz said a majority of Alaskans already have one of the 15 other federally compliant forms of identification that will allow them to fly. Over half the state’s population has either a passport or a military ID, and Wamsganz said most rural communities have a tribal ID program. It’s unclear how many tribal IDs are issued in Alaska, and Wamsganz said the process to get a tribal ID varies from tribe to tribe.

Department of Administration Commissioner Kelly Tshibaka said DMV workers encountered significant technical difficulties with a mobile Real ID machine during their first visit to a rural community, and that may prevent the department from traveling to other areas.

“I am not confident that our rural trips are going to continue if we cannot solve the problems that this camera has,” she said Thursday morning in a Senate Finance Committee hearing.

Sen. Lyman Hoffman, D-Bethel, said during the hearing that he finds it inexcusable that the department would not ask for funds to fix the camera or send employees to rural communities.

Wamsganz said officials are in touch with 20 communities about potential visits. Those communities and surrounding villages account for about 30,000 people, but it is unclear how many of the residents need Real ID as their sole form of federally compliant identification.

“Given that people sometimes have to travel for medical issues, this really has powerful consequences if someone tries to travel down to Anchorage or Seattle and is not able to travel because they don’t have an ID,” said Rep. Zack Fields, D-Anchorage, during the DMV’s presentation to the House finance committee Tuesday morning. “... In some cases these trips are going to be life-and-death circumstances to get on a plane.”

Real ID was passed by Congress in 2005 in the wake of the 9/11 terrorist attacks. There was bipartisan opposition from Alaska lawmakers who worried about the risks of personal data disclosure and the costs to enforce an unfunded federal mandate.

Legislators ultimately approved the program in 2017 and the IDs were first available in 2019.

In December, Tshibaka, the commissioner of the Department of Administration, had earlier solicited donations from the public to fund the $60,000 needed to bring DMV employees to rural communities with a mobile machine to create Real ID cards. Tshibaka said the department was also trying to obtain funds from nonprofits, community and tribal organizations.

“We have about 100 communities that we’re looking to visit in eight different regions. We can do that for $60,000,” she said. “If you want to give then we would love to see that happen and make that happen.”

Sen. Donny Olson, D-Nome, said he was “taken aback” by the state’s request for donations. He said he worries there will be people in rural Alaska who do not have their tribal ID cards when the Real ID deadline hits and that it could be “a very big problem” that the DMV cannot reach every community.

“It’s become pretty evident that they don’t have the money to travel out there and help everyone,” he said.

Rep. Dave Talerico, R-Healy, said the state budget is tight. He said many Alaskans travel to bigger towns to stock up on supplies and should plan to get their Real ID at that time. He emphasized that it’s important for travelers to know exactly which documents they need to bring so they are not turned away.

The Bristol Bay Native Corp. spent over a year planning for a DMV visit to New Stuyahok in mid-January, said Martha Anelon, a workforce development specialist with the organization.

The only way to get in and out of the roughly 500-person village in Southwest Alaska is by plane, and the nearest DMV offices are in Dillingham and King Salmon. Although both cities are roughly 50 miles away, Anelon said, a flight to visit a DMV office can be costly and time-consuming.

Anelon said many residents have gone without driver’s licenses, which prevents them from getting jobs. The corporation planned to bring the DMV to New Stuyahok to issue driving exams and said it was convenient that the visit also allowed residents to get a Real ID.

The DMV traded old equipment in December for a mobile machine capable of processing the Real ID. The New Stuyahok visit was the first time the DMV used the machine in the field, Wamsganz said. Tshibaka said employees experienced significant technical difficulties with the system’s camera because it has to be calibrated to capture specific facial features. She said the department considered the trip a success because they issued 83 Real IDs, but she is unsure if the equipment is up to par for another rural trip. Wamsganz said they are working with the camera’s vendor to troubleshoot.

Thirty to 40 people were turned away during the DMV’s visit because they did not bring the required paperwork or were otherwise unprepared, Wamsganz said.

The Real ID requires significantly more documentation than is needed for a traditional license. New applicants must bring two documents to prove their identity, like a valid passport, current driver’s license or a birth or naturalization certificate. Applicants need to bring a document verifying their Social Security number, like a W2 or their Social Security card, and two non-handwritten documents listing a permanent address.

Many of those who were turned away did not have original or certified copies of their birth certificates, Anelon said. Officials from Toksook Bay said they want to bring the DMV to their community but plan to first check that everyone has the proper documentation.

“In some cases it may be much harder to get the paperwork required for a Real ID than it can be to get one of these 15 other forms of ID,” Wamsganz said.

Rep. Talerico said he was unable to get his Real ID when he recently visited the Juneau DMV because his rural Healy home does not have a street number. He said the addresses listed for his home on other formal documents don’t match.

The DMV has now created an alternative method for rural Alaskans to verify their home address because many communities rely on post office boxes and do not have house or street numbers, Wamsganz said. The department will accept a letter on official letterhead from a person in leadership within the community that describes the resident’s home and general location.

Healy said he thinks the method would be a good alternative, but noted that it may be difficult to designate an official to verify the addresses in some of the more rural, unrecognized portions of the state.

The cost to communities varies but Wamsganz said the main expense is airfare. She said lodging is often provided by the community -- employees stayed in a “hospital-like setting” when they visited New Stuyahok to save money.

Micah Heakin, who runs the Gaming Department for the Eek Traditional Council, said he surveyed the town and found that at least 30 people want to get a Real ID. The council approved funds to sponsor the DMV’s visit and Heakin said he’s working to make sure everyone has the proper documents before then.

Heakin said he thinks it’s important to give everyone a chance to get the Real ID in case they need it to fly, because the only way in or out of the area is by plane.

“It’s harder to do things last-minute and if there’s an emergency or people need to travel for medical appointments, then it’s just easier,” Heakin said.