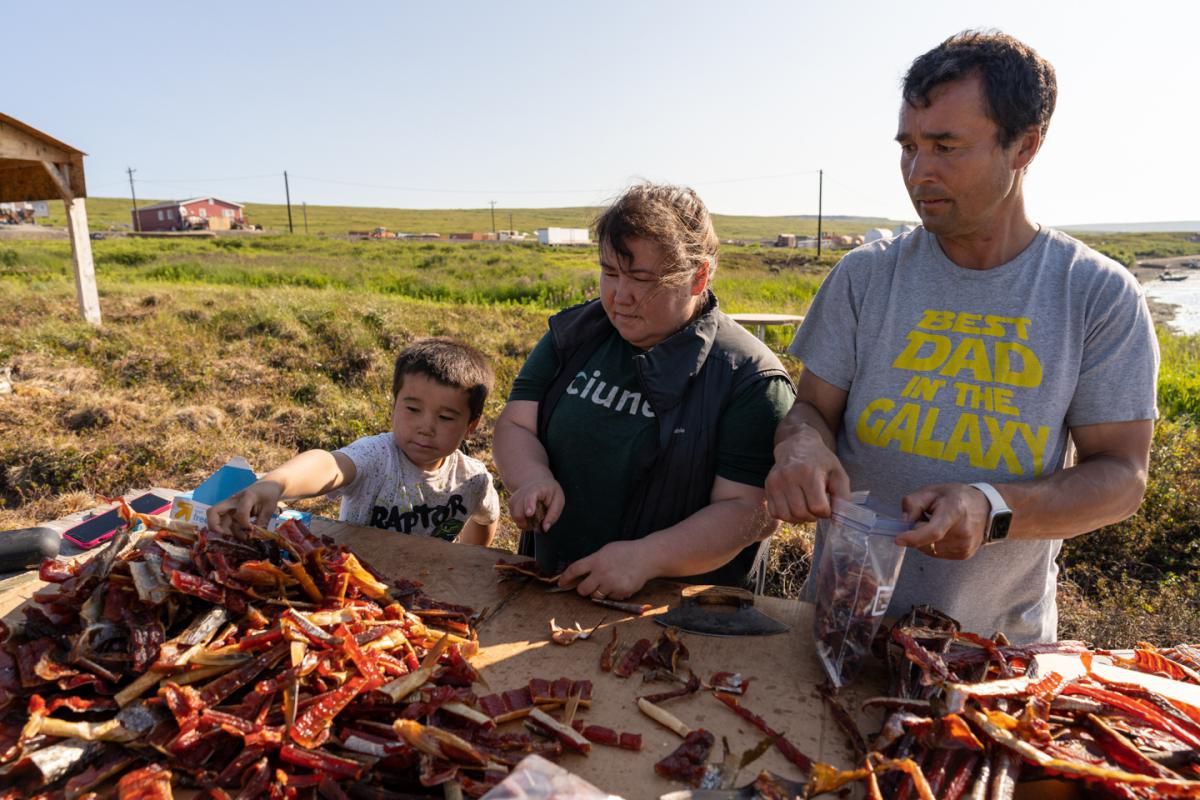 Jeffrey Charles Jr. grabs a quick snack while his parents, Lisa and Jeffrey Charles, cut strips near their smokehouse in Mertarvik, Alaska, on July 15, 2020. Lisa says that limited access to a grocery store has them eating more subsistence foods. (KATIE BASILE / KYUK)

Jeffrey Charles Jr. grabs a quick snack while his parents, Lisa and Jeffrey Charles, cut strips near their smokehouse in Mertarvik, Alaska, on July 15, 2020. Lisa says that limited access to a grocery store has them eating more subsistence foods. (KATIE BASILE / KYUK)

This article first appeared at KYUK.org and is republished here with permission.

It’s been almost a year since a third of Newtok’s residents moved away from their eroding village. Nine miles away in Mertarvik, they’ve gained more than just stable ground. Many say that they are healthier and living a more traditional Yup’ik lifestyle.

“When we were in Newtok, seems like their lungs were always chunky or we could hear them; there’s something in their lungs,” Katherine said. “But ever since we moved here, they hardly get sick.”

Katherine says that’s because the air is better in Mertarvik, both indoors and outdoors.

Mold is common in Newtok homes. As the permafrost thaws, the entire village sinks, with flooding an expected event in spring and fall. Tribal administrator Andrew John says the air quality in Newtok is bad outdoors because people dump their honey buckets right next to town.

“That stench,” Andrew said. “From the raw sewage that people have nowhere else to dump but the river. And when the sun starts baking and all those fumes get in the air, everybody smells it.”

In Mertarvik, low-flush toilets keep the smell of sewage out of the air. Instead, you breathe in the piney scent of Labrador tea, which flows from the hillside into every yard. Albertina Charles says it’s a plant with medicinal properties.

“That’s why we barely get sick, cause of the Labrador tea,” Albertina said.

In Newtok, if you step off the boardwalk, the mud sucks you in. But at Albertina’s new home, whenever she feels sad she steps onto the solid tundra, and her sadness fades away.

People’s diets have changed in Mertarvik too, according to Lisa Charles.

“Since we moved over here, we’ve started eating a lot more subsistence food since we don’t have access to a store,” Lisa said.

There is a store in Mertarvik, but with no commercial airport it has been sparsely stocked. So without groceries, Lisa says, people in Mertarvik are eating more seal, moose, halibut and salmon. She observes that some of her friends have lost weight, and she’s noticed other benefits too.

There’s also better access to subsistence activities in Mertarvik. Due to the eroded banks in Newtok, people have a brief window during high tide to get on the river. During the rest of the tide, they are surrounded by mud. Tribal Administrator Andrew John says that this year, some families are suffering as a result.

“There’s a lot of families that haven’t had the opportunity to fill their fish racks completely to prepare for the oncoming winter,” John said.

In Mertarvik, people can get on the river any time of day.

Outside his new home, Teddy Tom is building his dream maqii, or steamhouse. In Mertarvik, he can be on the river whenever he wants. And he can explore because he isn’t trapped in the village by unnavigable mud.

“At the new site we are living more in new lifestyle, what we used to do when I was young. I’m showing it to my sons,” Tom said.

Tom is one of the Newtok Village Council members. He says that they are all trying their best to get the entire village moved over so that they can all begin their new lives in Mertarvik together.

The Newtok Village Council invited KYUK to see how people are living in the new village. Before traveling, KYUK reporters consulted with medical professionals and received negative COVID-19 test results. While in the village, reporters wore masks when invited into peoples’ homes.