Gov. Dunleavy offers to share vaccine with residents of Canadian town in hopes of getting border restrictions eased 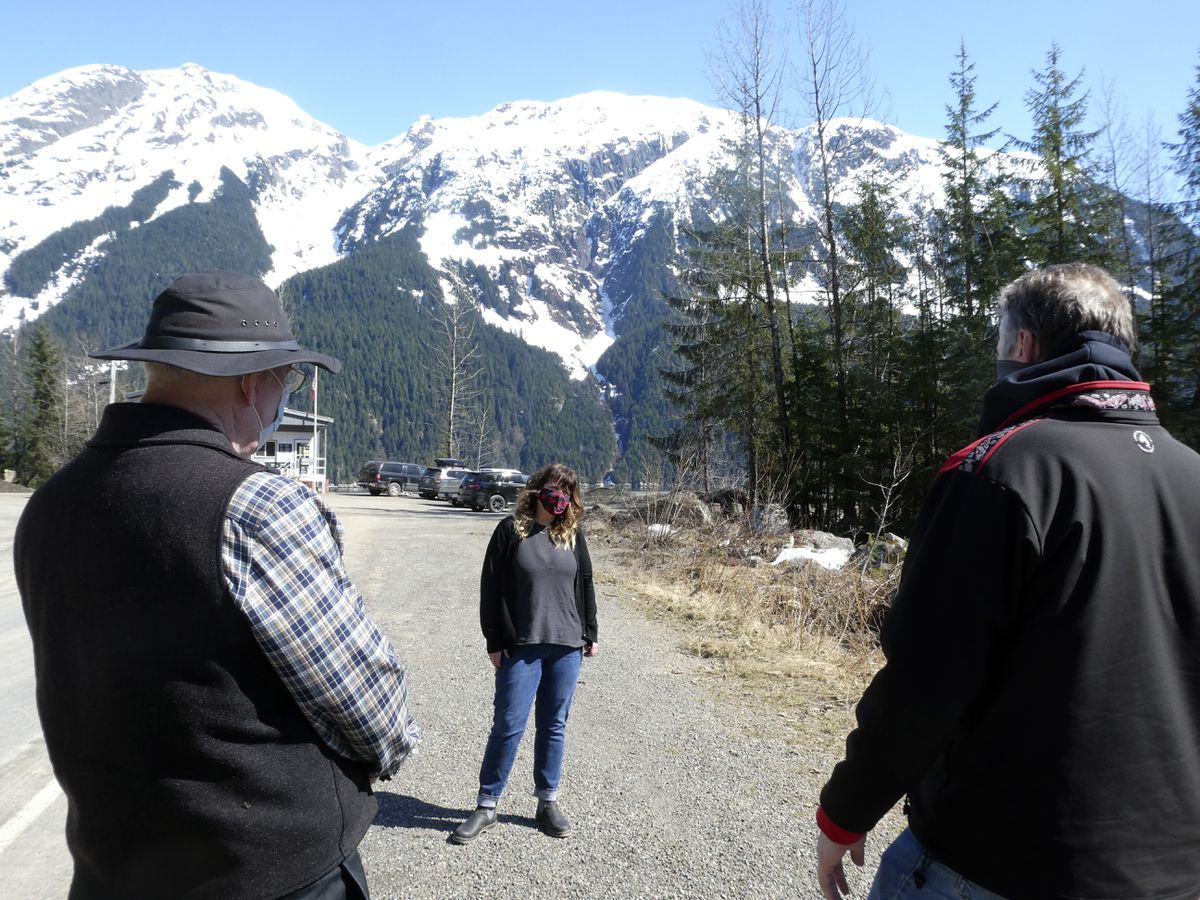 The mayor of Stewart, British Columbia, Gina McKay, center, meets with Alaska Gov. Mike Dunleavy, right, and Alaska state Sen. Bert Stedman at the U.S.-Canada border near Hyder, Alaska, on Thursday, April 22, 2021. Dunleavy said Alaska is in a fortunate position with its vaccine supply and wants to share it with people across the border in Stewart, British Columbia, a community that has close ties to Hyder. (AP Photo/Becky Bohrer)

The mayor of Stewart, British Columbia, Gina McKay, center, meets with Alaska Gov. Mike Dunleavy, right, and Alaska state Sen. Bert Stedman at the U.S.-Canada border near Hyder, Alaska, on Thursday, April 22, 2021. Dunleavy said Alaska is in a fortunate position with its vaccine supply and wants to share it with people across the border in Stewart, British Columbia, a community that has close ties to Hyder. (AP Photo/Becky Bohrer)

HYDER - Alaska Gov. Mike Dunleavy has offered COVID-19 vaccines to residents of the small British Columbia town of Stewart, with hopes it could lead the Canadian government to ease border restrictions between Stewart and the tiny Alaska town of Hyder a couple miles away.

“Our neighbors to the east are fantastic. We couldn’t ask for better neighbors than the Canadians. But ... their (virus) mitigating approaches have affected us greatly by slowing down traffic, limiting traffic,” Dunleavy told The Associated Press as he ended a long day of travel across Southeast Alaska late last week.

The trip included travel from Ketchikan to Hyder on a floatplane that held seven people, including the pilot. The AP was the only news organization traveling with Dunleavy and got a firsthand look at the Republican governor as he met with local leaders and residents in Ketchikan, Hyder and Metlakatla, the only Indian reserve in Alaska, to hear how they have been impacted by the pandemic and about their top priorities and concerns.

Hyder and Stewart are closely linked. Hyder residents get gas and groceries in Stewart, and kids from Hyder go to school there. Hyder even shares an area code with its Canadian neighbor and runs on Pacific time, an hour ahead of most of the rest of Alaska. Stewart has around 400 residents. Hyder, with an estimated population of nearly 70, flies a banner declaring itself “the friendliest ghost town in Alaska.”

Dunleavy referred to Hyder and Stewart as “one community in two countries.”

With COVID-19, travel into Canada has been restricted. Hyder residents say they can’t visit the homes of friends in Stewart, and Stewart Mayor Gina McKay said her residents are largely restricted from going to Hyder, including for recreational activities they were accustomed to, such as snowmaching and using Hyder’s boat launch to fish.

“It’s been tough on both sides,” she said.

Hyder is the only community in Alaska’s southernmost reaches accessible by road - a road that runs through Stewart. Hyder, at the head of a fjord, has a dock for floatplanes, but air travel can be limited by weather.

Dunleavy said he invited the state’s chief medical officer, Dr. Anne Zink, “on the spur of the moment” to accompany him Thursday and offer vaccines not only to Hyder residents who had not yet been vaccinated but also to people from Stewart.

He said he reasoned that, because the state has an adequate vaccine supply, “why not share it with them and try to get them vaccinated?”

In March, Alaska was the first state to fully open eligibility for vaccines and allow anyone 16 or older who lives or works in the state to get a vaccine. Dunleavy, seeking to revive a state tourism industry battered by the pandemic, recently announced travelers could get vaccines at some Alaska airports starting June 1.

McKay said many Stewart residents received a first vaccine dose during a weeklong clinic in Stewart around Easter but the wait time for a second dose is up to four months. British Columbia health officials said the approach is intended to make the most of a limited vaccine supply and allow more people to get first doses.

Zink said 19 people from Canada, most from Stewart, got shots Thursday in Hyder and one person from Hyder did. Zink administered the vaccines in a parking lot outside a community building given the warm, sunny weather. Some of the other Canadians who received vaccines were working in the area.

She said Stewart is “pretty well vaccinated,” and that the clinic there said it would send over people who were interested but not yet vaccinated. She said she thinks those were among the people who showed up Thursday. Most of the shots given Thursday were first doses, Zink said.

There are plans to work with state public health nurses to return to the area and Zink said they could bring additional second doses so that if anyone in Stewart wanted a second dose at that time, they could get one.

Dunleavy said he hopes that as more people get vaccinated “then maybe just maybe there’s a possibility that those two small communities that are really one can get back together and get back to living life as normal.”

McKay, who met with Dunleavy, a state senator and interested Hyder residents on a dusty section of road at the border, called the state’s offer to share vaccines incredible. If Stewart residents could get second doses that way, it could free up doses for others in British Columbia, she said.

But McKay said she’s not sure how soon the Canadian federal government might ease any travel restrictions. She said as restrictions have persisted, “I’m starting to forget what normal was like and worrying that this is the new normal.”