As ice thaws, rock avalanches on Southeast Alaska mountains are getting bigger 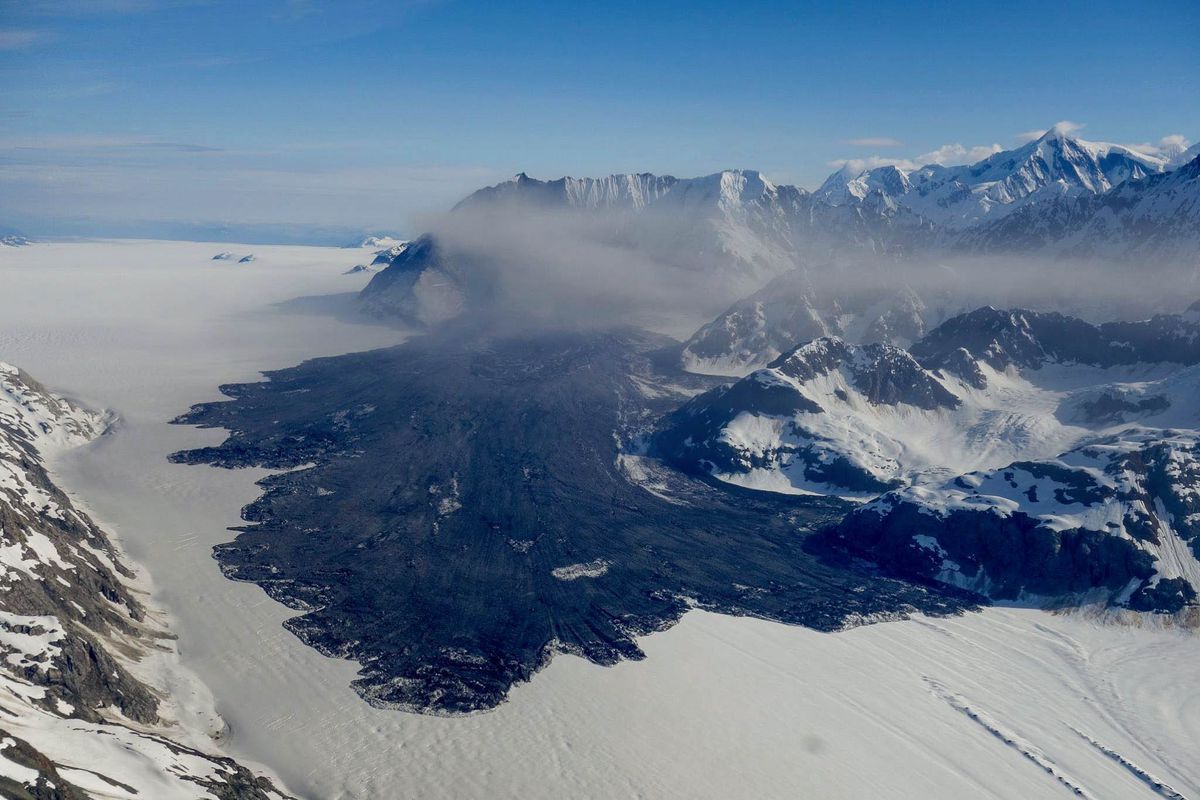 A 4,000-foot-high mountainside collapsed in Glacier Bay National Park June 28, 2016 in a massive landslide that spread debris for miles across Lamplugh Glacier below, seen in this photo taken the next day. (Courtesy Paul Swanstrom / Mountain Flying Service)

A 4,000-foot-high mountainside collapsed in Glacier Bay National Park June 28, 2016 in a massive landslide that spread debris for miles across Lamplugh Glacier below, seen in this photo taken the next day. (Courtesy Paul Swanstrom / Mountain Flying Service)

Last year, a 4,000-foot mountain slope in Glacier Bay National Park collapsed, spreading rock over about 8.5 square miles of glacier and creating a seismic signal as powerful as a magnitude-5.2 earthquake.

The year before, the face of another park mountain peeled off and sent about 220 million tons of rock and debris crashing onto another glacier and into the fjord below. The biggest non-volcanic North American landslide on record, it triggered a local tsunami that rose to 600 feet and stripped alders off high hillsides.

These massive rock slides were not flukes, scientists say. And even though they occurred in remote areas and have not led to human casualties, that may not be the case in the future — cruise ships and kayakers sometimes head into wilderness bays.

A study of rock avalanches in the western part of Glacier Bay National Park and Preserve found that the likelihood of large slides covering about 2 square miles has at least doubled in the last five years. As the climate has warmed, characteristics of the region's rock avalanches have changed, says the study, published in Landslides, the journal of the International Consortium on Landslides.

"They're bigger, and they're traveling farther," said lead author Jeffrey Coe, a U.S. Geological Survey landslide expert based in Colorado.

"They're kind of clustering towards the large end," said co-author Marten Geertsema, a scientist with the British Columbia government and an expert on the region's geology.

The likely reason, says the study, is thaw of the ice that fills the mountains' rock cracks, crevices and fractures, referred to as "rock-permafrost," abetted by melt of the region's glaciers and the particular structures of the slopes.

The rock-permafrost helps hold steep slopes intact, so thaw or even softening of that ice destabilizes the rock, Coe said. "You can get ice degradation below freezing," he said.

Glacial thinning is likely a secondary factor, he said. Thinned glaciers are less effective at propping up mountain faces, he said. "In many places, you have a de-buttressing effect of the ice loss," he said.

The study correlates the increasing size of Glacier Bay rock avalanches to a long-term warming trend. The large avalanches began about two years after the area's annual maximum temperature shifted above freezing, the study points out.

The study examines the 24 rock avalanches that happened from 1984 to 2016 in western Glacier Bay National Park and Preserve, and uses satellite imagery for consistency in measurements over the three decades.

The trend extends beyond park boundaries. The whole mountainous region of Southeast Alaska and neighboring parts of Canada has emerged as a hot spot for such events – now closely tracked by a seismic system created by scientists at Columbia University's Lamont-Doherty Earth Observatory.

Mount Steele in Canada's Yukon, for example, let loose two massive slides in the past decade, a 50 million-ton dump in 2015 and a 115 million-ton event in 2007.

Geertsema has seen the aftermath of several slides up close, and is accustomed to being dispatched to the field. "Anytime there's a big rock slide in Alaska, people contact me," he said.

He camped with colleagues last year at the site of the 2015 slide, which dumped much of the rock into Taan Fjord, triggering the tsunami. He was also able to fly over Mount La Perouse about two weeks after 75 million tons sheared off of it in 2014. And he has gone to to scenes of several Canadian slides.

Getting to the remote sites is important because the transformations need to be witnessed and recorded, he said.

"They change so much so quickly, it's really important to be there quickly," he said.

Being on scene when the slides happen, however, is not advised.

Though the region's major rock slides struck areas that were devoid of people, that might not always be the case.

"You kind of have to be aware of these things when you venture out into the backcountry," Geertsema said. "These are absolutely not survivable."

Dangers lurk on the water as well as on land.

There is potential for more tsunamis like the Taan Fjord event if more mountain slides hit the water, Coe said. And open water is getting closer to the unstable mountain slopes as glaciers recede, he said.

Such hazards loom in other parts of the world where there are steep, rocky mountains, thawing rock-permafrost and receding glaciers.

In Greenland this June, four people were killed by a tsunami that was triggered when a rockslide dropped from a mountain slope into a fjord. There, the rockslide creating a seismic signal similar to that of a magnitude-4.1 earthquake, and a wave rising more than 300 feet struck a fishing village.