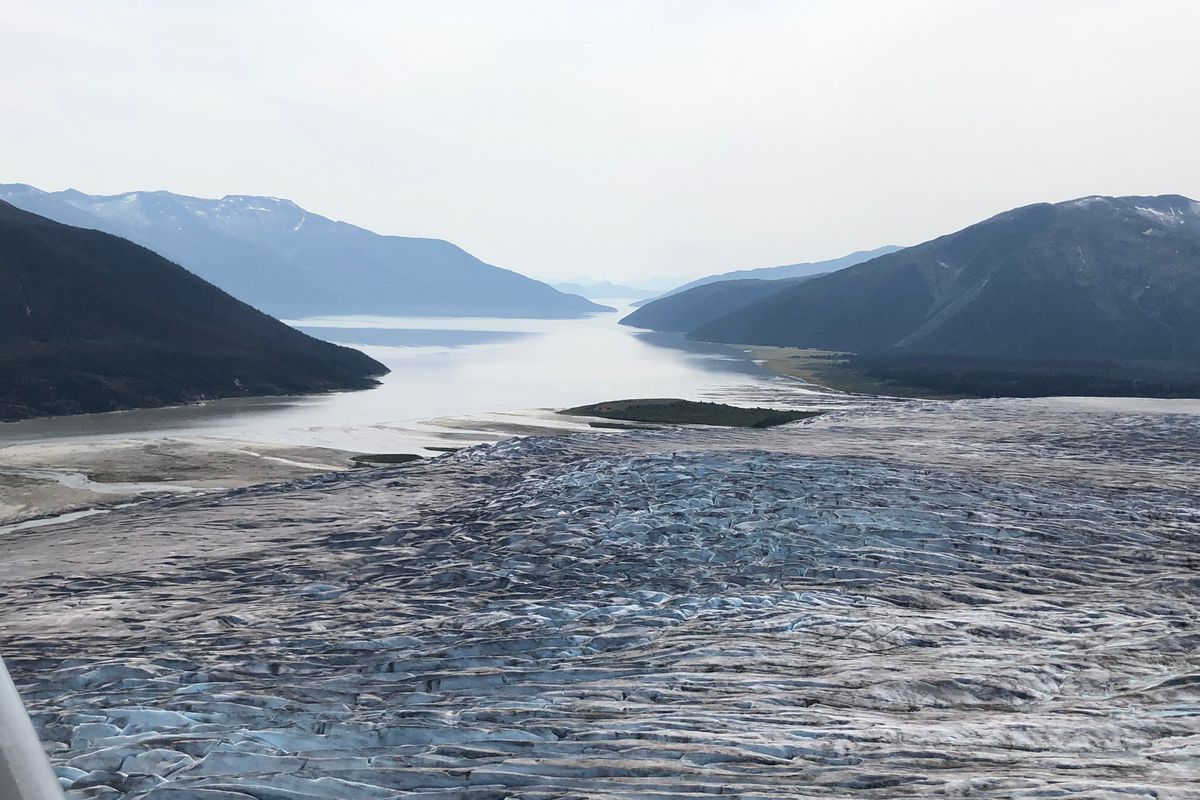 The terminus of Taku Glacier and the Taku River are seen from an aircraft, looking southwest, on Aug. 2. (James Brooks / ADN)

The terminus of Taku Glacier and the Taku River are seen from an aircraft, looking southwest, on Aug. 2. (James Brooks / ADN)

JUNEAU — The massive Taku Glacier has grown for nearly 130 years, extending deep into fjords and its namesake river southeast of the Alaska capital. Now, measurements indicate the Taku has ended its defiance of Alaska’s warming climate and become the last of the Juneau Icefield’s dozens of glaciers to retreat.

Chris McNeil, a U.S. Geological Survey geophysicist whose as-yet-unpublished scientific paper chronicles the glacier’s change, said the Taku’s reversal could send icebergs into the Inside Passage and the Port of Juneau, as it did in the late 19th century and early 20th century.

“Scientifically, I can’t say that is going to be a thing, but in the past, we know that when Taku was calving, icebergs were drifting into downtown Juneau,” he said.

In more recent history, the disintegration of the Columbia Glacier sent icebergs into the oil-shipping lanes of Prince William Sound. The conditions facing the Taku Glacier are similar, but the Taku is more than twice as large as the Columbia.

Even if Juneau never becomes an urban Glacier Bay, McNeil said, the reversal of the Taku on its own represents “a pretty important benchmark in regard for glaciers and climate change in Alaska.”

There’s no precise number for how many glaciers exist in Alaska because defining a glacier is somewhat subjective. A 2011 comprehensive study identified 27,000, according to the U.S. Geological Survey. The National Park Service says 100,000 is “a pretty good estimate.”

Regardless of the number, only a handful are reliably advancing, said Nichols College professor Mauri Pelto, a co-author of the Taku paper.

Until recently, the Taku was one of that relative handful, and its switch is a sign of the growing effects of climate change.

At 1,500 square miles, the Juneau Icefield is a third larger than the state of Rhode Island, stretching from the Pacific Ocean into Canada. It has dozens of named glaciers and many more smaller, unnamed glaciers. According to a 2016 scientific paper, the ice field is expected to lose more than half its ice by the end of the century and to disappear completely before 2200.

McNeil has been studying the Taku since 2009, when he was a student under the Juneau Icefield Research Project, which has been operating annually since 1946. The project, a training ground for younger environmental scientists, has become one of the longest-running glacial research efforts in the world.

McNeil studied what’s formally known as the glacier’s “mass balance,” how much ice it gains and loses each year.

“It’s kind of like balancing the glacier’s checkbook each year,” he said.

Glaciers are born when more snow falls in winter than melts in summer. If that process repeats for years, the snow compacts into ice. When enough ice is layered upon ice, it begins to flow downhill and becomes a glacier.

In Alaska, warming has caused the snow line to creep steadily upward. Glaciers at low elevations are seeing less snow and more rain. The Taku, Alaska’s thickest measured glacier, is generally at high elevation, meaning it has until now escaped the starvation of snow that has caused other glaciers to shrink. (Hubbard Glacier, near Yakutat, has also escaped consistent retreat for that reason.)

“But in the last 10 years, what we’ve seen is the percentage of the glacier’s area covered by snow at the end of the season has really diminished,” McNeil said.

This summer was the second-warmest on record in Juneau, and four of the five warmest summers have come since 2016. (The warmest was in 2004.)

The snow line this summer advanced to a record-high 1,450 meters (4,757 feet) above sea level, Pelto wrote in a blog post this month.

That record followed several years of other high snow lines.

When McNeil began his work, he intended to write about how the glacier was thinning, but the data show that the glacier is now retreating as well. He said the paper is still in review but could be published before the end of the year.

“It’s taken a lot of people by surprise,” he said. “For so long, it had seemed so resilient from the changes in climate.”

Geological records indicate the Taku has retreated before, but those retreats took place before reliable record keeping began in 1890. The glacier has occasionally wavered in its advance but it hasn’t shown signs of a consistent retreat, like it does now.

Currently, the glacier’s face is supported by a rim of sediment shoveled forward by its advance. As the Taku retreats, it will leave that support behind and begin floating on the fjord beneath it.

In 1982, Prince William Sound’s Columbia Glacier began a similar retreat and disintegrated quickly. Since then, it has lost more than 10 miles of its length, calving into icebergs that forced the creation of an ice-watch program for oil tankers traveling to and from Valdez.

Depending on how quickly the sediment ring erodes, the Taku — more than twice as large as the Columbia — could do the same for the waters of the Inside Passage.