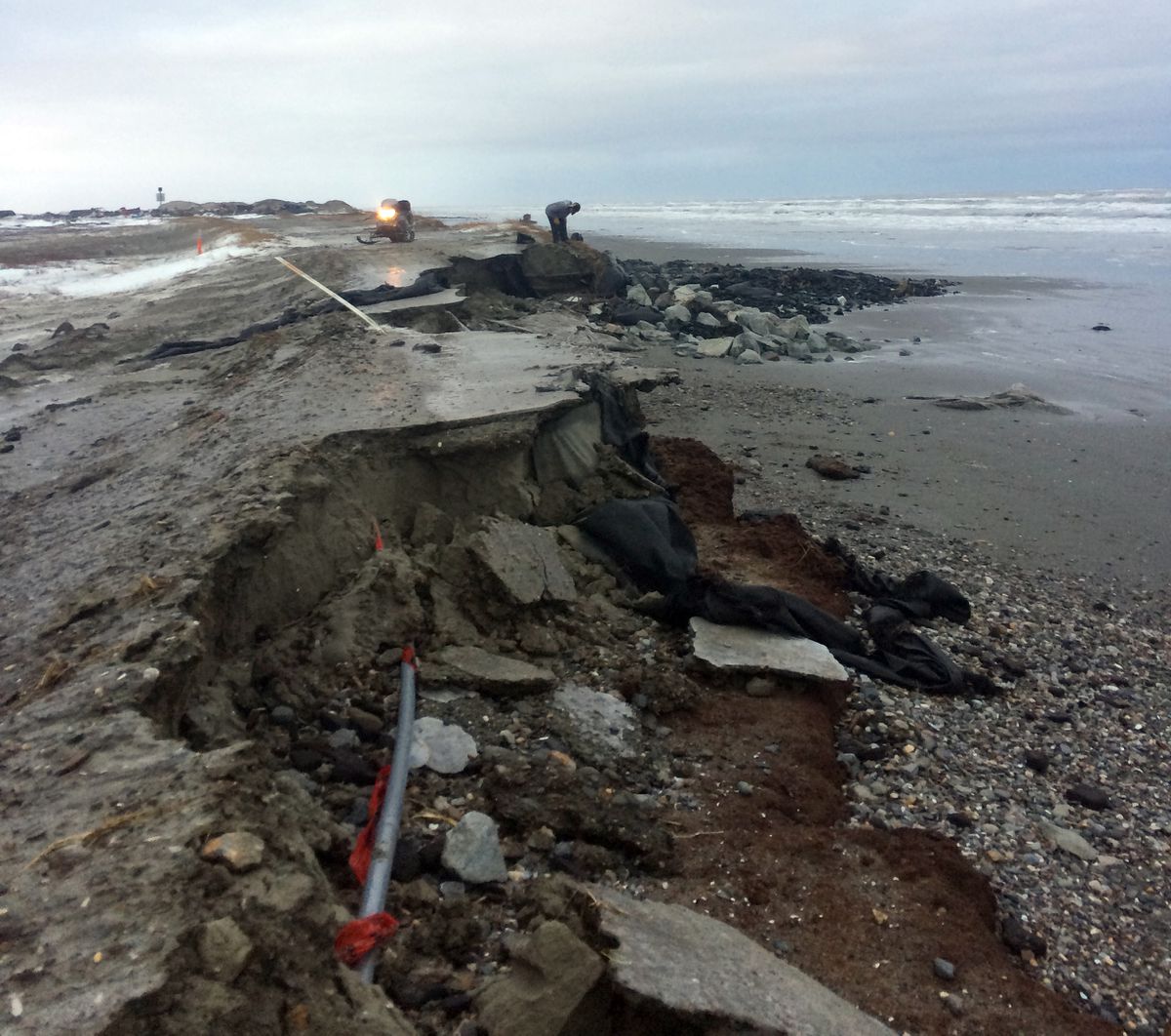 "Major erosion is expected with this storm," the National Weather Service in Alaska said.

The warning spells out specific threats to some villages, including Golovin and Unalakleet off the Bering Sea, and Kivalina and Shishmaref, perched on barrier islands in the Chukchi Sea.

Rick Thoman, climate science and services manager for the agency, last week said storms that were once run-of-the-mill are increasingly dangerous in Western Alaska.

With ocean temperatures well above normal, coastal sea ice no longer shields the coast as it once did this time of year, he said. Without the sea ice, wave action is stronger.

The coastal flood warnings and advisories, posted on the agency's Facebook page, are in effect starting 3 p.m. Tuesday and lasting until 6 p.m. Wednesday. They generally extend from the Yukon River mouth to Point Hope in the north.

The biggest surge is expected south of the Bering Strait, with sea levels expected to rise up to 12 feet above the high-tide line. But surges will also be strong in the Chukchi Sea to the north, with winds ranging from 35 to 55 mph.

A strong weather system will bring coastal flooding to portions of the west coast of Alaska through Wednesday. Several...

Posted by US National Weather Service Alaska on Tuesday, November 21, 2017

The storm originated in the Bering Sea and is moving to the northeast, said Joe Kryston, a meteorologist with the agency in Fairbanks. It could track toward Barrow on Wednesday, he said.

The threat of coastal flooding in Western Alaska should diminish in December once sea ice grows thick enough, he said.

In the Unalakleet region, the storm surge will push sea levels 9 to 12 feet above the normal high-tide line, the agency said Tuesday. "Low-lying areas around the fish-processing plant" and the Alaska Commercial grocery store in Unalakleet will probably be inundated, the agency said.

In Golovin, sea levels will rise 7 to 9 feet above the normal high-tide line, forecasters say. All areas northwest of the post office, including the school, will be affected by high water, the agency said.

In Kivalina, Tuesday's storm will plow water into the lagoon, causing "significant wave run-up and erosion along the beach" and flooding along one side of Channel Street, the agency said. Shishmaref could see flooding in low-lying areas, and the road to the dump might be struck again.

In multiple villages in Western Alaska, "residents should prepare by moving boats and other valuables" far above the normal high-tide line, the agency warned.