Anchorage usually loves warm weather, but this heat wave is something else 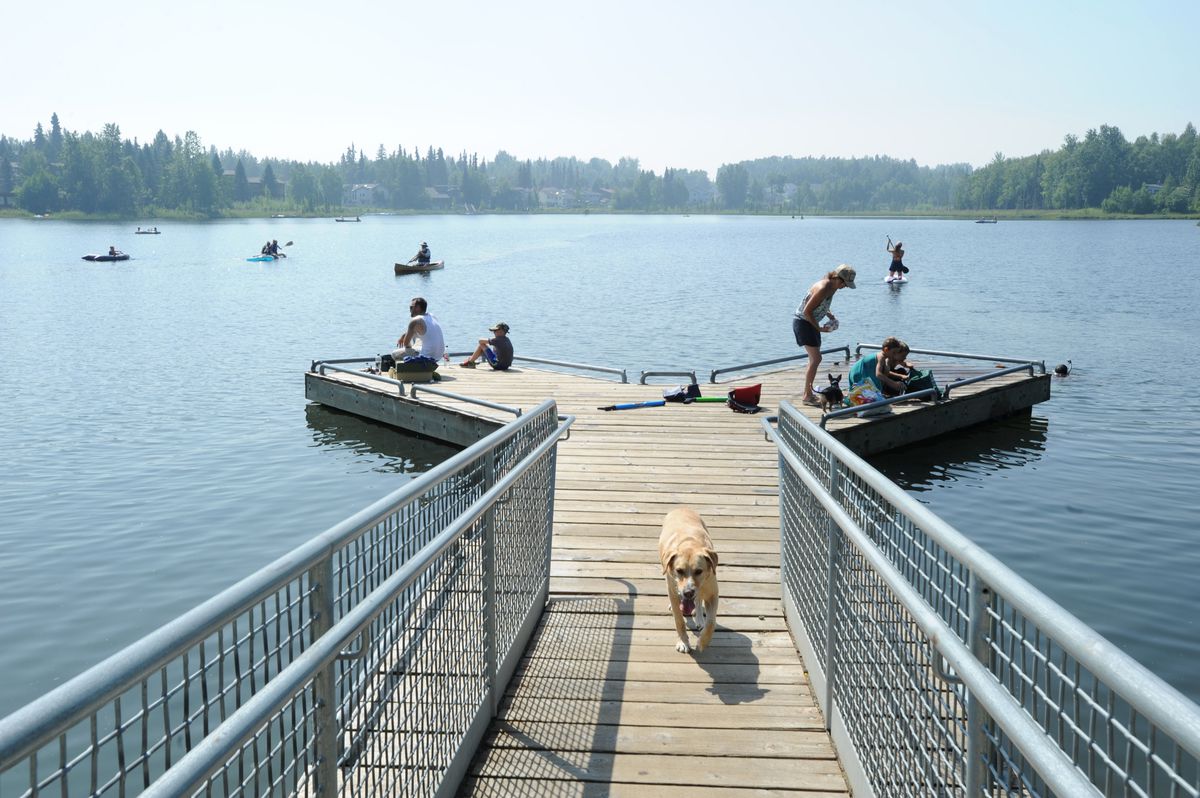 People in Anchorage usually long for warmth. All winter, there are pilgrimages to Hawaii, and then summer rolls around, and we relish the sunlight and spend every free moment outside.

But now the city is a week into the hottest stretch of weather in its history, including an all-time record of 90 degrees on Thursday, and the pleasure and novelty of Hawaii-hot temperatures have worn off.

You can’t buy ice, a fan or a kiddie pool. Wildfire smoke hangs in the air. Police have been rescuing dogs from hot cars and the health department tweeted warnings about heatstroke. Many houses, built to hold heat in the winter, don’t cool down well and few have air conditioning. People head to the movies to cool off and drive around in air-conditioned cars with no real destination. The soccer fields are yellowing. Men stand shirtless at bus stops, dogs pant endlessly and people wear shorts to work in defiance of dress codes. Someone put a box fan on Facebook Marketplace for $1,000.

This is the first time that Abby Slater Whipple has used the auto-start on her car during the summer. Usually, that function is reserved for cold weather.

“You know how in winter you rush from your warm house to your warm car?” she said. This week, she and her husband have been using the auto-start to get the air conditioning going before they drive. They have also “never bickered this much,” she said.

“It’s sort of all the worst parts of winter but then you feel guilty because you’re not outside enjoying yourself,” said Slater Whipple, who was born and raised in Anchorage. “You have that Alaskan sun-guilt. You feel just awful.”

Cindy Burrill’s condo in Eagle River has been between 82 and 88 degrees for a week, she said, and she couldn’t get it to cool down. It was hard to sleep.

“I’ve tried all of the hacks about when to open your windows, how to place your fans,” she wrote. “There has been no relief.”

She built a homemade air conditioner as described online, with a cooler, ice, a fan and duct-tape. Then it started leaking. And she almost cried. Finally, on July 4, when the temperature hit 90, an all-time record, she went to a hotel. She usually likes warm weather, she said. But this ... this is too much.

Instead of going outside, Slater Whipple and her husband have gone to movie theaters multiple times in the past week. They’ve even ranked them by how cold they are inside.

“Tikahtnu is cool, but not as cool as Century,” Slater Whipple said.

The Anchorage True Value Hardware on Jewel Lake Road was flooded with calls Friday from people in search of fans, said owner Tim Craig. When the heat wave started, the hundred or so fans in stock sold out fast. The store got about 90 more late Wednesday morning, and they were gone by the end of the day.

Anytime Slater Whipple and her husband see a fan at a store, they buy it, she said. They now have five ⁠— one for every room in the house (which doesn’t have air conditioning).

The sprinklers and air purifiers at True Value have all been snatched up. Kiddie pools are also sold out, Craig said. People have been buying those for their kids, of course, but also to help their dogs cool off in the heat.

The Costco in South Anchorage sold more air conditioners last week than in all of 2018, said manager Bob Ripley. On a recent day, the store sold about 80 air conditioner units in about half an hour.

“Eighty percent of the calls I’m getting today are for fans and air conditioning,” Ripley said Friday. The store was out of both Friday afternoon, and also out of air purifiers (to deal with the wildfire smoke).

Supplying enough ice to keep up with demand has been a struggle, too, he said. That’s the case all around town. The Carrs grocery at Northern Lights Boulevard and Minnesota Drive had signs taped to the doors on Thursday that read “Sorry we are all out of ice,” along with a frowny face.

Bill’s Distributing sells ice to supermarkets around the city, so they have an extra supply when in-store machines run out. But it’s hard to keep up when it gets over 75 degrees, said sales manager Tony Webster.

“It’s been difficult, it’s hectic,” he said. “It’s hard to explain ⁠— we don’t have this unlimited supply. We produce what the market will bear. We don’t really expect 90 (degrees).”

At Costco, "water sales have been off the charts. Gatorade sales. Ice cream, all that good stuff,” Ripley said.

And the city itself is thirsty. The average water consumption is around 22 million gallons per day, with summer peaks being as high as 35 million gallons per day. During the most recent run of high temperatures, which included one day when firefighters had to douse a serious wildfire in east Anchorage, the city’s water consumption was twice that normal peak consumption level, said Sandy Baker, public outreach coordinator with Anchorage Water & Wastewater Utility.

“This is the longest period of high demand we’ve ever experienced. We are closely monitoring our system to make sure we can continue to meet the high demands,” she said.

Anchorage has an ample water supply, sourced from Eklutna Lake, Ship Creek, and groundwater wells, as well as nearly 70 million gallons of water storage reservoirs, she said. There is no danger of running low.

Electricity use, which increases in other cities because of cooling, was flat for Chugach Electric, the largest provider of electricity for residential customers in Anchorage according to spokeswoman Sarah Wiggers. Many homes have no air conditioning to run, she said. It’s light late into the evening so no one is turning on lights. The heat is driving people outdoors.

“Who wants to cook on an electric stove in this heat?” she said.

It was too hot to even want dinner on July 4, said Maggie Wilkinson. She has lived in Alaska for nearly 70 years, mostly in Anchorage. She met her breaking point Thursday, when the heat and smoke became too much. She took her dogs to Connor’s Bog park. But they suffered in the heat, and that made her suffer.

“I thought, I am really sick of this, I am sick of hot weather,” she said. “I know how to get warm. I just don’t know how to cool off.”

Wilkinson spent time driving around in her air-conditioned car to take the edge off. But she felt guilty roving around aimlessly. So she and her husband decided to put the drive to good use by delivering food to people through a group they volunteer with.

Lindsay Clark, a chocolatier with Coddle & Cosset, tried a few times to make her chocolates over the last week and gave up. Alaska is usually a great place to make truffles, she said. But chocolate has to cool at a certain rate to set, and the ambient temperature has been too high. Her workspace isn’t temperature-controlled because there’s never been a need for that, she said.

“Besides the challenge of making the chocolate, it’s hard to think about them out in the world, finding their way into someone’s car or sitting in the sun.”

She’s giving some thought to fudgesicles now instead.

“If weather like this continues, I might have to build that into the business plan,” she said.