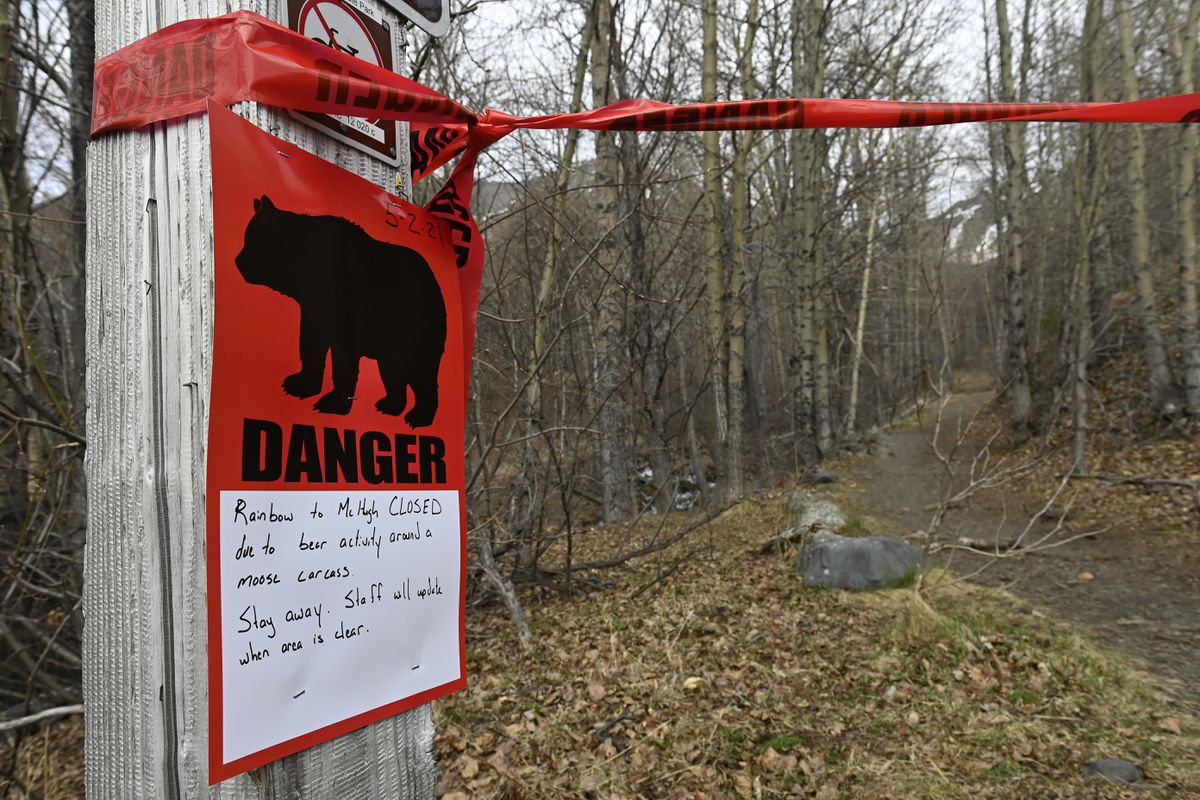 A sign at the Rainbow trailhead shows that the Turnagain Arm Trail is closed to McHugh Creek due to bear activity on May 3, 2021. (Marc Lester / ADN)

A sign at the Rainbow trailhead shows that the Turnagain Arm Trail is closed to McHugh Creek due to bear activity on May 3, 2021. (Marc Lester / ADN)

A popular portion of the Turnagain Arm Trail closed over the weekend because of bear activity, potentially interfering with one of the season’s first trail races.

“Bear activity around a moose carcass” forced the closure of a portion of the trail that stretches from the McHugh Creek to Rainbow trailheads, Alaska State Parks said on social media. The area closed Sunday and will remain closed until it’s deemed safe.

**Chugach Update** McHugh to Rainbow is closed. Due to bear activity around a moose carcass, this area is temporarily...

A man was recently charged by a brown bear sow with three cubs in the area as well, said Dave Battle, an Anchorage area wildlife biologist with the state Department of Fish and Game.

The man had been off the trail a little ways and retreated behind a tree after the bear initially charged him, Battle said. The bear charged at him again but retreated after he used his bear spray, according to Battle.

Recent reports of bear activity are the latest sign that spring has arrived and hibernation is over, prompting calls from wildlife officials for Alaskans to be bear aware.

Meanwhile, the Turnagain Arm Trail Run is scheduled to begin Thursday along 8- and 4-mile stretches of the trail. Organizers said in a Facebook message Monday that they are still figuring out whether plans will need to change and what that may look like.

“If the trail is going to be closed, we might do the run in a different format or push it back by a week,” organizers said in a message.

A black bear killed a teen runner during a 2017 race on nearby Bird Ridge. Two people were fatally mauled along the McHugh Creek trail in 1995.

Battle said the worst thing to do when encountering a bear in the woods is to run because it can trigger a chase response from the bear.

It’s important to carry a deterrent in an easily reachable spot in case the bear begins to charge, Battle said.

“You should carry a deterrent, whether that’s bear spray or a firearm or both,” he said. “Firearms can be a very good way to go, it’s just that you have to be very well practiced and know that you can put the rounds in the kill zone in a very, very stressful situation where your hand might be shaking or something like that. Bear spray is well documented in its effectiveness against bears, and you don’t have to be all that accurate because it comes out in a big cloud.”

Battle said bears in town are often drawn to homes by unsecured trash or bird feeders. Bears that are able to eat bird seed or dig through trash cans can become reliant on the human-supplied food sources and can become too comfortable around people, Battle said.

Each year, bears have to be killed because they become too much of a risk, he said. Fish and Game aims to educate the public enough about the dangers of urban bears before the situation escalates, Battle said. Last year officials killed 16 bears and another nine were killed by people defending life or property. The numbers vary greatly from year to year, Battle said.

“What we’re seeing from research in some other areas, is that in years when natural foods are abundant, you don’t see many conflicts,” he said. “When you might have lower natural food years, because maybe some particular crop that they depended on failed or was low due to weather or any number of factors, typically you’ll see more bears coming into town and eating trash or bird seed.”

Battle said the biggest thing that can be done to keep bears away from neighborhoods is simply using bear-resistant trash cans and making sure that garbage is not left out on any day other than collection day. People who routinely leave out garbage can be fined $320, Battle said.

Bear-resistant trash cans are not guaranteed to keep bears out, but they are significantly more secure than normal bins, Battle said.

Some bears have figured out how to get open a series of bear-resistant trash cans used by Alaska Waste customers in Girdwood and Anchorage, Battle said. He said the company is trying to find a way to make the cans work better so they can fix any of the trash bins that have proven to be less effective.

“Those cans are still more resistant than regular cans,” Battle said. “And the other thing to know is that if you have a bear-resistant can and a bear did manage to get into it — you’re not going to get a ticket for that. You went the extra mile to to get a bear-resistant can, and it’s not your fault that the bear figured it out.”