In 'They Don't Talk Back,' Tlingit identity in flux 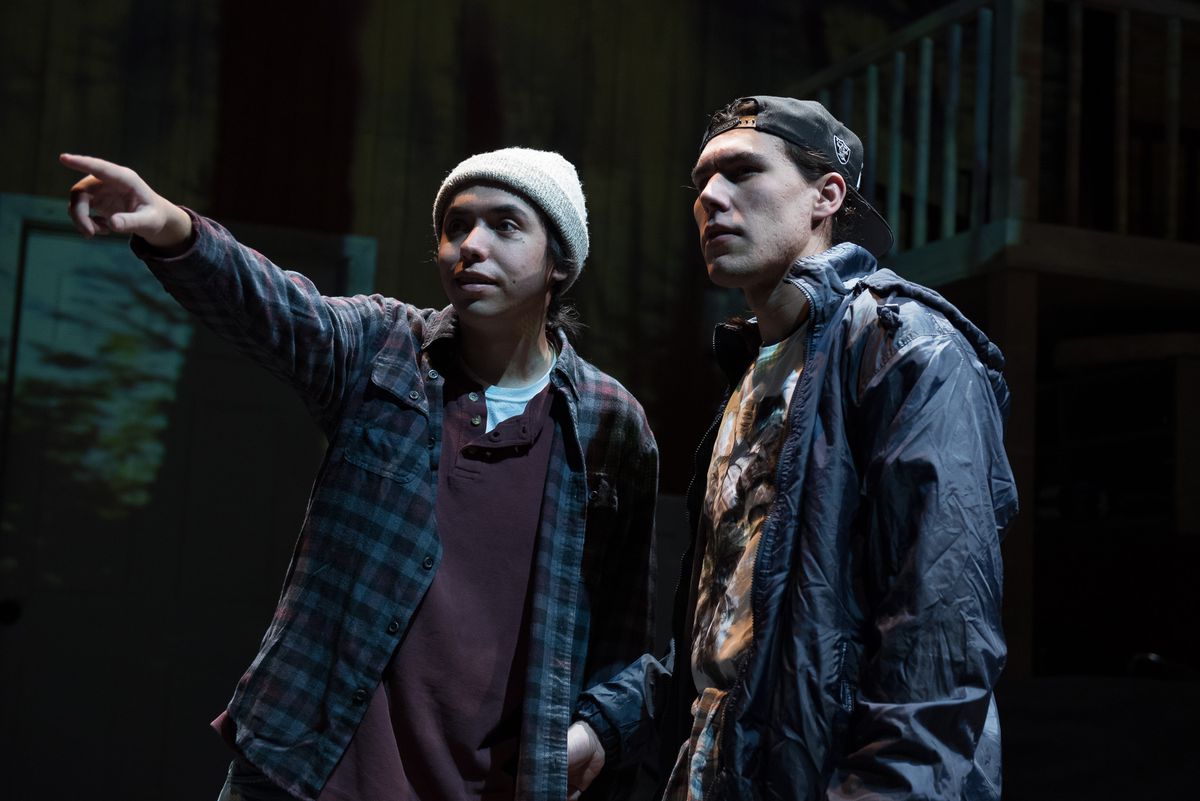 Kholan Studi (Edward) and Skyler Ray-Benson Davis (Nick) in “They Don’t Talk Back,” a production from Perseverance Theatre. (Photo by Ryan Wilson)

Kholan Studi (Edward) and Skyler Ray-Benson Davis (Nick) in “They Don’t Talk Back,” a production from Perseverance Theatre. (Photo by Ryan Wilson)

Water is a near-constant theme in "They Don't Talk Back": frequent rainstorms, the ocean that gives food and sometimes threatens lives, tears withheld and tears shed. Perseverance Theatre's world premiere of this work by Tlingit playwright Frank Henry Kaash Katasse opened Friday to an appreciative and at times awestruck audience at the Alaska Center for the Performing Arts.

Dilution is also a theme in terms of Native culture. The play is set in Southeast Alaska in the 1990s. Angry teenager Nick (Skyler Ray-Benson Davis) is half Tlingit and knows almost nothing of his heritage. Abandoned by his troubled father (a veteran of Desert Storm) and sent to his grandparents after his drug-addict mother (who is white) gets arrested, Nick holds tight to the mainstream cultural artifacts – CD player, Raiders cap, fashionably saggy pants, hip-hop slang – he considers superior to village life.

The other Tlingit characters have also had their identities mixed with Western influences. They speak only a few phrases of the Tlingit language, tell ancient tales while also embracing Christianity and mix traditional foods and remedies with Pepsi and Western medicine. While they sometimes dance and drum, they're more likely to play Trivial Pursuit and savor repeat viewings of cheesy horror flicks and a professional wrestling match during which the Ultimate Warrior defeats Hulk Hogan ("The savage finally beats the American hero").

Katasse's drama is a moving, often painful and at times mordantly funny tale of family and identity. The story's themes – culture, identity, forced assimilation – are universal enough to resonate with many ethnic groups. But it's gratifying to see a mainstage production of a work written by Tlingit playwright and directed and performed by Native Americans (four of whom are Alaska Native). Alaskans should be able to tell their own stories.

[Alaska professional theater Perseverance is thriving against the odds]

Other rural issues are illustrated, too: declining resources (exacerbated by government regulations), poor access to health care, the lack of paying jobs combined with the need to keep up boat and house payments, the flight of young people from villages.

The struggle of veterans plays out on the anguished face of Nick's father, Tim (Brian Pagaq Wescott), who cannot remember what happened in Kuwait and is unable to sleep anywhere but out in the woods. The rain, he says, is like a baptism from God. As he strikes a crucifixion pose and waits for that benediction it's obvious that he, like other wounded warriors, will forever be punished for the sins of generals.

The action is not linear, but rather a series of vignettes that skillfully provide backstory – that is, that tie history to modernity. Like any good storyteller, Katasse shows rather than tells us why patriarch Paul (Jake Waid) is a stern disciplinarian or the reason that Edward (Kholan Studi), another abandoned grandson, came to be the slightly confused and seemingly submissive teen who just wants everyone to get along.

Katasse avoids pat epiphanies: "Gosh, my wise old Native grandpa was right all along!" or "Maybe it's time to get back in touch with my roots." Choices made onstage are like the ones made in real life: hopeful, angry, loving and completely organic. It unfolds like truth.

The single set is a very basic village home (think: plywood) plus a section of boat dock. Video projected against the house's interior illustrate things like rain, the ocean and photographs of Tlingit artifacts. All are soft-focus and at times barely discernible, like fading memories or dreams that dissolve upon awakening. Even so, the characters live the parts of their heritage that were maintained, honoring something that invaders tried to crush but could never quite eradicate.

Initially Nick questions that identity, cruelly saying that if Tlingits couldn't even save their own language then they can't very well do much for their descendants. His grandmother, Linda (Diane Benson), retorts that their survival itself is testament to strength and resilience: "Our culture runs through our veins," no matter how much has been taken away.

All five actors are so skilled it's impossible to note any standouts (although Benson's eyeroll when discussing the male of the species brought much laughter). From the first line of dialogue the audience is immersed in real lives, real love, real rage, real loss and real hope.

It's a treat to view such strong performances and a privilege to get a glimpse of the lives of indigenous people in the modern world. Go with an open mind and an open heart and you may find both changed forever.

THEY DON'T TALK BACK, a Perseverance Theatre production, continues through March 12 at the Alaska Center for the Performing Arts. Show times are 7:30 p.m. Wednesday through Saturday and 4 p.m. Sunday and March 12. Tickets are $38 to $49.25, available at CenterTix. (263-2787)