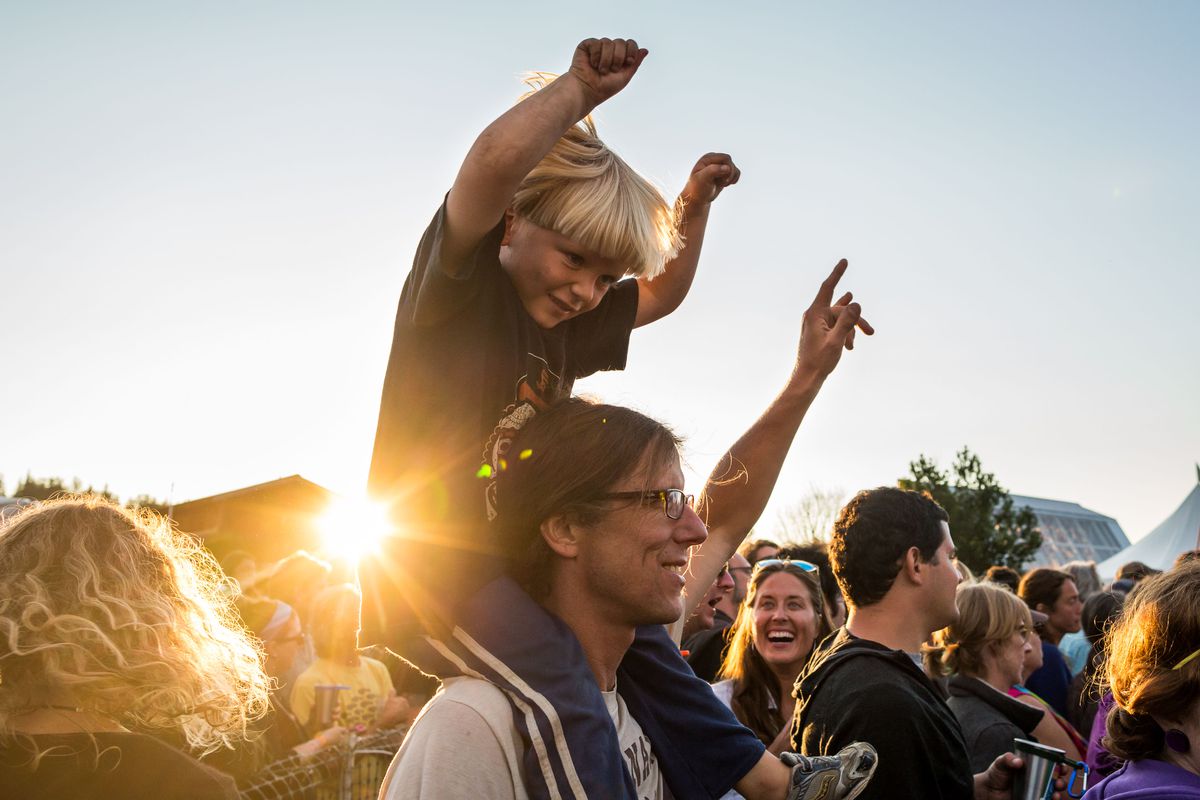 A feast of festivals is coming to help squeeze every drop of sunlight out of summer.

More than two dozen state-spanning seasonal shindigs invite you to frolic in the forest, sip back and relax in beer gardens, stock up on arts and crafts, savor summer treats, and sway in your shorts and bohemian dresses to the music of artists from Jewel to Night Ranger.

Peruse our roundup of the state's major festivals and fill your summer social calendar.

The Spenard Jazz Fest is a multidisciplinary arts festival celebrating different genres of music in Alaska while still emphasizing jazz. Now in its 10th year, Spenard Jazz Fest features a series of house concerts and other events. This year’s artist in residence is saxophonist and “Saturday Night Live” music director Lenny Pickett. (spenardjazzfest.org)

This dusty, rustic bash in the woods presents more than 40 acts over three days. This year's performers include The Jephries, The Dirty Hands, The Avery Wolves, The AK Fire Circus, Ghost Town Gospel, Intuitive Compass, Fairbanks Fire & Flow, The Shoot Dangs and The Heretic Foundation. Tickets are $100 at the gate, and $90 if purchased before the event. Tickets available at Planet X in Spenard, The Shack in Wasilla, Grassroots Guitar in Fairbanks, Sugar Magnolias in Soldotna and The Fringe in Homer. (facebook.com/bootsbisonranch)

Toss tomatoes at actors, dance with peasants and tear into huge turkey legs at this rollicking ren fair at the Tozier Sled Dog Track, which will be transformed into the mythical land of Hillshire. The first weekend is pirate-themed, and the second is fantasy-themed. Costumes are not required. The fair also includes a food and craft market with jewelry, carvings and more from local vendors.  Tickets are $5-$8 per day. Limited weekend VIP passes are also available. (3barons.org)

Since 1972, the Sitka Summer Music Festival has presented some truly excellent classical music performances, bringing world-class artists to the picturesque town of Sitka. Under the leadership of Grammy-award winning cellist Zuill Bailey, this year's festival will run about a month and feature performances in some unlikely venues, from cafes to a boat on Sitka Sound. (alaskaclassics.org)

Groove to "music on the top of the world" in Chicken. The lineup for the 11th annual Chickenstock features Alaska artists including "Father of Alaskan Bluegrass" Carl Hoffman, who will perform with Northern River, Fairbanks-based bands Steve Brown and The Bailers, The Dry Cabin String Band, Cotton Ginny, Ryan Bowers and The Brain Trust, and Anchorage artists Hannah Yoter and Kat Moore, who will present her new solo project, The Forest That Never Sleeps. Tickets are $75 for adults and $25 for kids 6-18. (chickenstockmusicfest.com)

Celebrate the Kenai River at a free three-day festival presented by Kenai Watershed Forum. The family-friendly event features live music, a beer and wine garden, an area dedicated to kids' activities, food booths and an artisans' market. The fest's traditional Run for the River is on June 10. A discounted early registration fee of $25 for both the 10-mile and 5K runs is available through June 3. (kenaiwatershed.org)

This year, the keynote speaker at this creative writers camp at Land's End Resort on the Homer Spit is Pulitzer Prize winner Jane Smiley, author of "A Thousand Acres." Authors, editors and agents from all over the country will lead readings, panel discussions and workshops on topics including crafting the perfect end to a story, how to pitch manuscripts and how to use humor to enhance your writing. There will also be creativity-stimulating activities like yoga and a Kachemak Bay boat cruise.

The conference fee is $425 through June 8 and $450 after that. The public can attend free evening readings by visiting writers on June 10-12. (writersconf.kpc.alaska.edu)

This will be a week of workshops, readings, performances and experimentation with artists from Alaska and beyond. This year's visiting artists include playwright and Tony-nominated actor John Cariani; Carrie Baker, chair of the Department of Theatre and Film at the University of Alaska Fairbanks; and Australian playwright Timothy Daly.

The Denali Cooks will play this music and cannabis festival at a yet to be determined location. A glass-blowing expo, sessions on growing and the medicinal benefits of cannabis, and vendors selling cannabis accessories and growing products will be featured. Tickets are $25 per day and $75 for the whole weekend if purchased before June 2. The prices rise to $30 and $80 after that. (thedankdipper.net)

Back to Bluegrass Festival

Anchorage's Downtown Summer Solstice Festival is a giant among the season's several solstice celebrations. This year's highlights include the Hero Games, a friendly competition for Alaska first responders, the Petals & Spokes Beer Garden for brew and biking enthusiasts, crafts, a kids' play zone and the Taste of Anchorage Food Zone. (anchoragedowntown.org)

A special guest appearance by "Ru Paul's Drag Race" season eight winner, Bob The Drag Queen, is just one of the attractions at this weeklong party celebrating Alaska's LGBT community. Some festival highlights include The Youth Arts Showcase on June 19; The Rainbow Run on June 20; the Pride Parade on June 24; and The Pride FilmFest at Bear Tooth Theatrepub on June 19 and 20, featuring two LGBT movies –"KIKI" and "3 Generations." The fest closes with the "This Is Drag" show at Mad Myrna's, starring Deja Nouveau and Allie McQueen. (alaskapride.org)

The Midnight Sun Festival is a free festival that dominates downtown Fairbanks and this year will feature more than 30 live performances, 150 vendors, gold panning and much more. (downtownfairbanks.com)

Euphoria returns to 49th State Brewing Co. with headliners including Flamingosis, a New Jersey-based electronic music producer and beat boxer, and Colorado's DeadPhish Orchestra, which merges the music of Phish and The Grateful Dead. Tickets are $20 a day or $40 for a two-day pass. Camping available. (euphoriadenali.com)

Local musicians and vendors will gather for three days at this family-friendly music festival. Performers include Lulu Small, Justin McCain, Wild Cat Trio, John Budnik Band, Brother Shane and Nic Doss. Single-day tickets are $15 for adults, $10 for youths, free for children 12 and younger. Three-day passes are $40 for adults and $90 for a family. (Search "Houston Music Festival" to find details on Facebook)

Get your kilt and tartans ready for the 36th annual Scottish Highland Games, presented by the Alaska Scottish Club. There will be tug of war, field events, piping and drumming groups and a vendor area featuring all things Scottish. Single-day tickets range from $5-$20. (alaskascottish.org)

No dogs. No politics. No religious orders. Those are the rules at this free, family-friendly fair that serves up exotic food, handcrafted items from Alaska artists, and entertainers from all over the state. The traditional Forest Fair Parade commences at 10 a.m. on July 8. Attendees have several camping options nearby. (girdwoodforestfair.com)

This festival has a schedule brimming with food, vendors and amusing events including a Teddy Bear Picnic, the Golden Wheel Carnival, the Bear Paw Grand Parade at 11 a.m. on July 15, and The Slippery Salmon Olympics, in which teams of two swerve around orange traffic cones hauling a whole salmon and other objects. (bearpawfestival.org)

A melding of music, art, sound and light, Spectrum was founded as an oasis for electronic music. This year's lineup includes electronic dance music artist Shlump and Zebbler Encanti Experience, described as "an audio/visual collaboration between video artist Zebbler and electronic music producer Encanti" that creates "a fantasy world for audiences to lose themselves in." Early bird tickets for $65 are on sale through the Spectrum Festival website. After that, the price rises to $75. (spectrumfestivalalaska.com)

The fest, described on the event website as "summer camp for adults," is a smorgasbord of workshops, performances and chances to create and mix and mingle with acclaimed artists on the campus of University of Alaska Fairbanks.

This will be the second bluegrass festival at Scot Dunnachie's  property on Sandy River near Willow. This year's River Grass lineup hasn't yet been announced. Tickets are $15 per day or $30 for the whole weekend. Family and local discounts are available. (sandyriveralaska.com)

Binge on blueberries and wear clothes you don't mind staining at this sweet, juicy festival on the grounds of Girdwood's Alyeska Resort. Live music, fun runs, a pie-eating contest, tons of blueberry treats, a blueberry creations contest and berry-picking are all on this year's festival menu. This year's headliner is Great American Taxi. (alyeskaresort.com/calendarevents/blueberry-festival)

Wrap up the festival season in Seward with live music and dance performances, local food and crafts vendors, art projects and kids' activities at the Dale R. Lindsey Alaska Railroad Intermodal Facility. This year's theme is "Fish Tank." The concert lineup hasn't yet been announced. (sewardfestival.com)