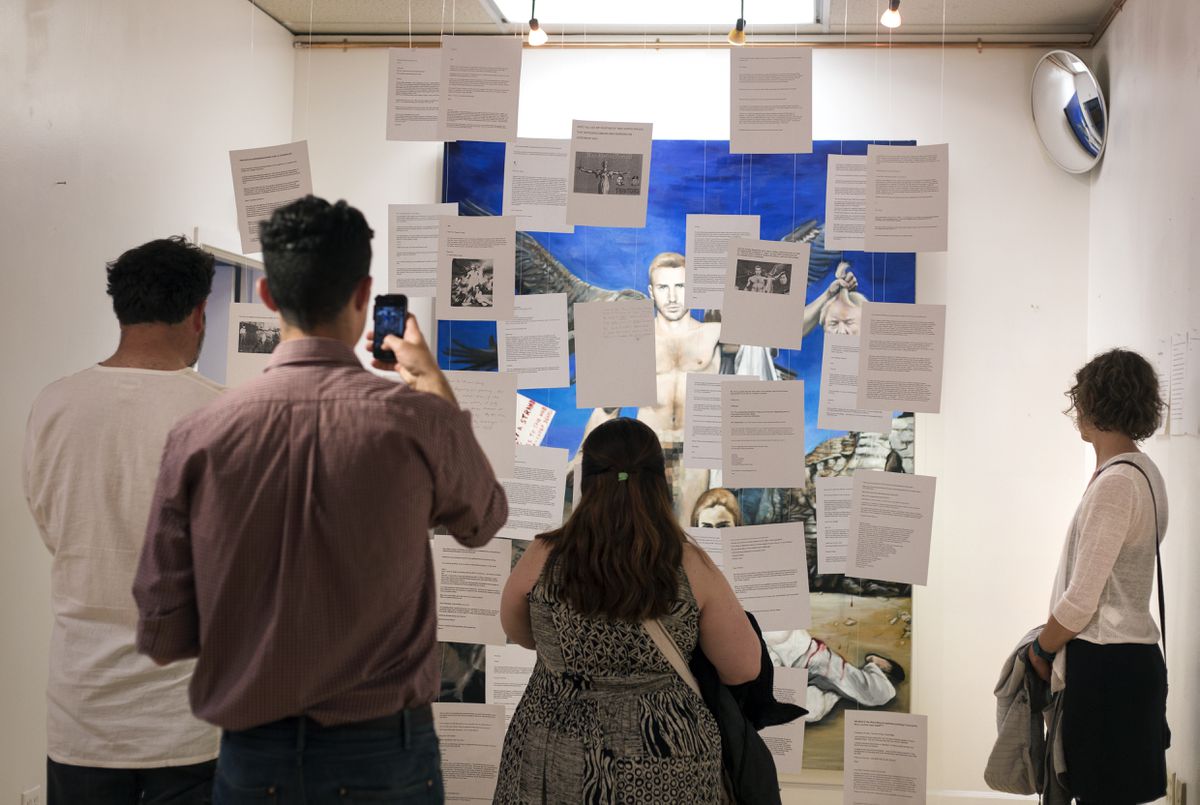 Visitors look at the installation “Everything” by Thomas Chung at the “Trumpazo!” exhibit on Friday, June 2, 2017, in Anchorage. The controversial painting received backlash calling for its destruction and punishment for Chung. A barrier with printouts of these messages was created between the viewer and painting, acting as a way to expand the conversation. (Rugile Kaladyte / Alaska Dispatch News)

Visitors look at the installation “Everything” by Thomas Chung at the “Trumpazo!” exhibit on Friday, June 2, 2017, in Anchorage. The controversial painting received backlash calling for its destruction and punishment for Chung. A barrier with printouts of these messages was created between the viewer and painting, acting as a way to expand the conversation. (Rugile Kaladyte / Alaska Dispatch News)

Kathy Griffin isn't the first person to brandish a severed Donald Trump head in a picture. She's just the most famous.

Chung's politically incorrect painting has resurfaced in "Trumpazo!", a multimedia art show at the Alaska Experience Theatre tackling the Trump administration and the social issues inflamed by it.

In a clever cover-up that keeps passers-by from involuntarily seeing Chung's work, the painting is veiled by hanging printouts of the emails the artist received. Many of the messages take shots at Chung's sexual orientation and Chinese heritage, and some even encourage him to kill himself.

"Tom handed me reams of paper with emails and I read through everything. It changed how I saw the painting," "Trumpazo!" curator Indra Arriaga said at the show's First Friday opening. "I displayed it in this way so you could look at that correspondence and navigate through that hate to get to the freedom of speech part."

Chung's painting is just the tip of "Trumpazo!"

"These pieces are challenging," Arriaga said. "My expectation is every piece will lead you to a conversation about something bigger."

Gonzales' interactive painting "Pull My Tie, Watch Me Lie" tempted gallerygoers to tug the bottom of a real red tie peeking out under the president's painted tie. Pulling it makes Trump's mouth open like a ventriloquist's dummy.

Around the president's head, the words "Alternative Truth" are rendered in a shiny gold, vampiric font.

"I really love it. It's well executed" said gallerygoer Ana Gerber-Cavalier. "I like the talking head there. He's a good puppet."

Jeanna Duryee was a bit apprehensive when she yanked the president's neckwear.

"I was afraid a forked tongue was going to come out when I pulled it," she said.

Gonzales, who has been making political art since the George W. Bush administration, said the interactive piece is a rehash of his work from that era.

"Originally the subject of that was Dick Cheney," Gonzales said. "And, of course, here we are again with the Trumpster, which kind of shows you that the more things change the more things stay the same."

Arriaga conceived the idea for the show shortly after the election. She said she didn't intend it to be a total Trump bash.

Arriaga put out a call to artists and didn't get any submissions with positive perspectives on the administration or the state of the country. She added that some of the proposed pieces were simply swear words with images of Trump.

Although she didn't demand expressions of exasperation, the name of the show does not imply content.

Trompa, Arriaga explained, is a Spanish word for mouth.

"If somebody gives you a trompazo, they gave you a big punch in the mouth or beat you really badly and you didn't see it coming." Arriaga admitted she couldn't resist turning the O into a U.  "It just fits."

Arriaga has several pieces in the show. One is the enigmatic, organic "We Can't Breathe," a thick, bristly fishing rope hanging by the large paint-crusted nails sticking out of it. It's rolled into a noose, symbolizing how the administration is suffocating immigrants, minorities and more groups, Arriaga said.

In an act of ironic re-purposing, Arriaga used the same rope for "Breathe" that she used in the model for her immigrant-celebrating sculpture "We've Come So Far," which stands in Mountain View.

She wanted to experiment with twisting the materials from that positive statement "to now reflect something that is really challenging and painful, which is this idea that we're not just being suffocated, we're being choked. This is happening to our free speech and our modes of expression."

"Trumpazo!" is presented by Out North Contemporary Art House. Arriaga, an Out North board member, said the organization is planning on moving from the DeBarr Road building that has been its home for 13 years. The exhibit at the gallery of the Alaska Experience Theatre is a sort of test run for the space, Arriaga said.

"It's is a huge change for us, but it's also a huge opportunity," Arriaga said. "It's a really nice way to get a fresh start and really start focusing on programming."

When: Noon-4 p.m. every Saturday and Sunday through July 2

Where: Gallery at the Alaska Experience Theatre, 333 W. Fourth Ave.