Artists work to brighten a dreary stretch of Spenard Road 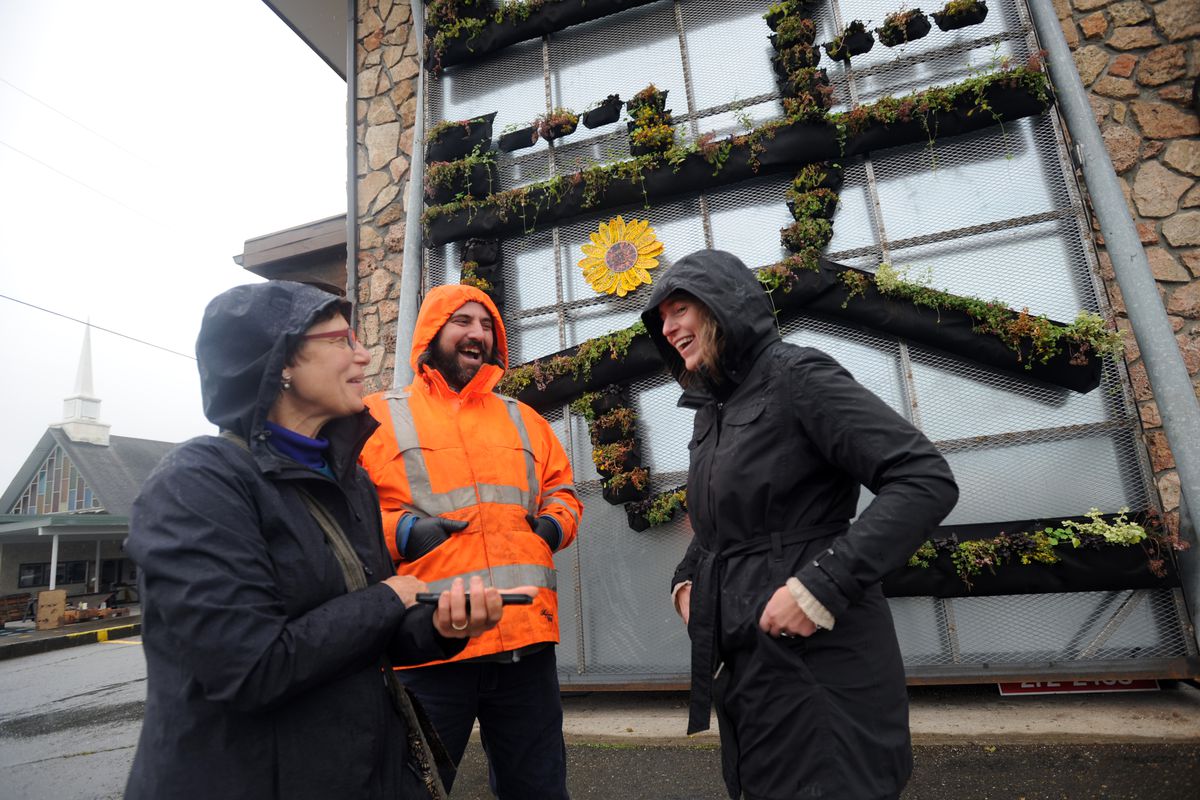 Artists Susan Share, left, and Karen Larsen, right, with Chad Taylor of Intrinsic Landscapes during a visit to their art installations on Friday, Aug. 25, in Spenard. Share designed the wall sculpture behind them on the 3400 Spenard Road building, and Larsen designed the new Church of Love signs next door. Taylor is overseeing projects funded by an ArtPlace America grant received by the Cook Inlet Housing Authority. (Erik Hill / Alaska Dispatch News)

Artists Susan Share, left, and Karen Larsen, right, with Chad Taylor of Intrinsic Landscapes during a visit to their art installations on Friday, Aug. 25, in Spenard. Share designed the wall sculpture behind them on the 3400 Spenard Road building, and Larsen designed the new Church of Love signs next door. Taylor is overseeing projects funded by an ArtPlace America grant received by the Cook Inlet Housing Authority. (Erik Hill / Alaska Dispatch News)

When it is finished, Susan Share's light sculpture installation on the facade of 3400 Spenard Road will be a glowing pastiche of Spenardalia.

"I'm looking at the history of the neighborhood, the businesses and how stories and history of Spenard could be incorporated in the wall," said Share of the sculpture, which represents a Spenard street map.

She said she plans to weave in images of Spenard history and even some quotes about the neighborhood, including this one from former Anchorage Assemblyman Jim Kubitz: "It's where the salt of the earth live. It has everything you want, but not everything you need."

A few years ago, the Cook Inlet Housing Authority thought that part of what the neighborhood needed was a makeover of the bleak asphalt surroundings at 3400-3600 Spenard Road.

A $3 million ArtPlace America Community Development Initiative grant received in 2015 by CIHA has allowed local designers, artists and makers to transform the area into a living, light-filled outdoor gallery and gathering place.

[An afterlife for the Church of Love?]

Share's sculpture is part of the project, which is called "Reclaiming Asphalt." The changes, meant to establish that stretch of Spenard as a safe and creative community hub, started last year.

The project picked up again this past July and there is no set deadline for completion, said Chad Taylor of Intrinsic Landscapes, who is heading up the project.

"We really want to portray Spenard Road as something with the potential to be very vibrant and alive; something that's illuminating," Taylor said. "Everything has an aesthetic value to it, but it's more about how people use space. It's all very people-centered."

The centerpiece of the revamped blocks is the Church of Love.

The outside of the experimental community art space now more closely reflects the fun and funky exhibits and performances on the inside.

Several of the new and planned features, including Share's sculpture, will provide inviting light and a feeling of warmth in winter.

Graphic artist Karen Larsen designed a new Church of Love sign. The aluminum sign with graphic cutouts spelling out the venue's name will light up during the dark days and nights.

Illumination will also emanate from a giant 3-D steel shadowbox mural on the church's south wall, which will be designed by Drew Michael and cut by Garrett Perkins.

"In the wintertime it will be this glowing lantern," Taylor said of the mural-in-progress. "We wanted to do something different than a typical painted mural."

Next to the space the mural will occupy is a vertical steel trellis with pots of Virginia creeper at the bottom. According to Taylor, the plant will survive through winter and snake all the way up the trellis after a few years. Taylor said a red dogwood hedge will also be planted on the south side of the church.

Last year, Taylor and his team created moveable modular benches, a fire pit and planters to make the church's outside environment a comfortable, welcoming place to sit and socialize.

Also last year, artist Kerby McGhee painted the polka-dotted asphalt ground mural in front of the church, which resembles a giant Twister mat. And Taylor and his team constructed community cubbyholes meant to spur interactivity between Spenardians and the space.

Taylor wants the artistic additions to pique the interest of passersby and inspire them to investigate all the elements.

"I really like the idea of opening up the church and having something that's always visible to passersby outside, whether you're on foot or driving by in your car or on your bike," Taylor said.