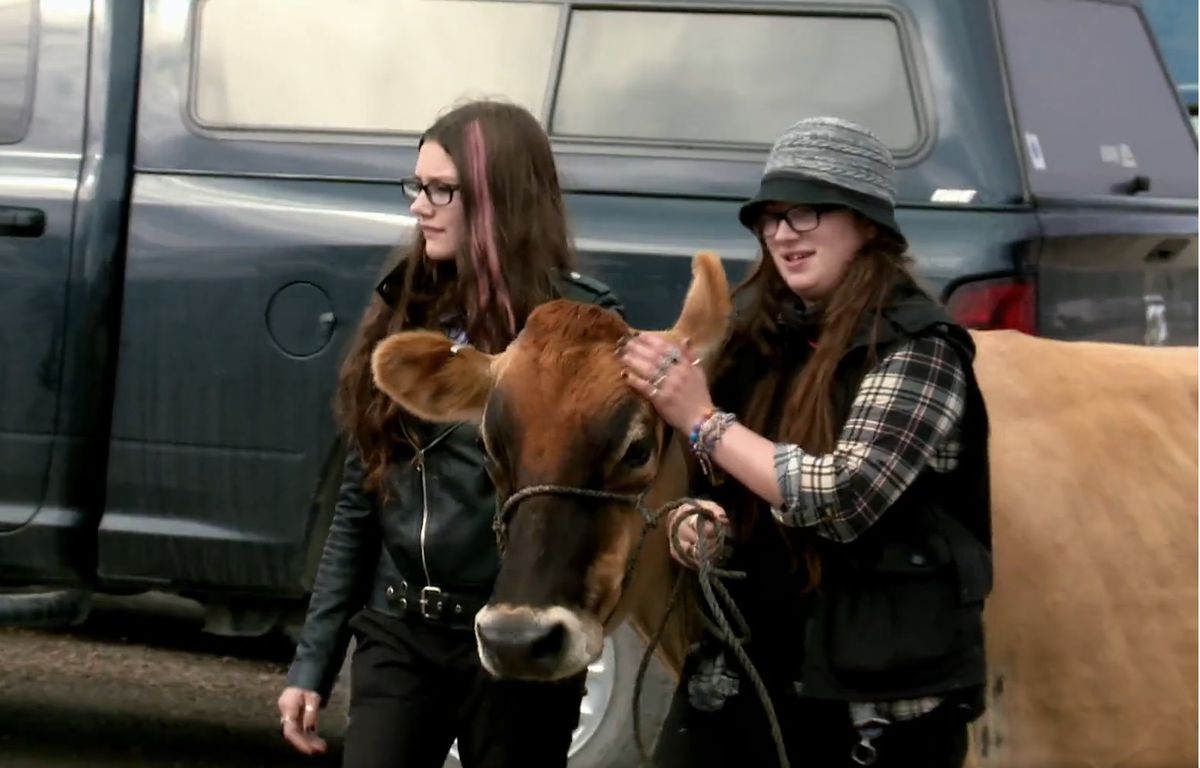 Raindrop and Snowbird Brown lead their cow to the boat dock in a scene from “Alaskan Bush People” (Screen shot via Discovery.com)

Raindrop and Snowbird Brown lead their cow to the boat dock in a scene from “Alaskan Bush People” (Screen shot via Discovery.com)

It seems like just yesterday that I was sitting on my couch and I received a press release about a brand-new show called "Alaskan Bush People." Somehow, we're now in its sixth season. You know which shows had fewer than six seasons? "Breaking Bad," "The Wire," "Friday Night Lights," just to name a few. Here is a concise list of the top five marvelous/absurd things we learned in the season opener of "Alaskan Bush People."

1. Billy Brown, father of approximately seven to nine children, cuts his adult sons' hair. This became apparent as he was cutting the hair of his middle son, Gabe. Gabe described his hairstyle as "the 1950s basic punk look, like a trucker hairstyle and an Elvis hairstyle." How society would describe his hairstyle is curly mullet that is occasionally in a ponytail, with extremely aggressive sideburns and a lot of hair up top. So actually, he is somewhat right about his description, if you take out the part about the 1950s and just stick with trucker meets Elvis.

2. Snowbird, the oldest daughter, is excited for the family to get a milk cow, not because they will have access to milk in the Bush, but because "animals are my friends." She's like the Cinderella of Browntown.

We also got some quality material in the beginning of the episode when producers did their typical segment asking the Brown children about current events and popular culture. "Do you know who won the World Series last year?" they asked Snowbird. To which she responded, "Is that football?" and went on to talk about how she just learned about Rihanna. On the other hand, Bear (her human brother) said the Golden State Warriors were "like a knight days thing where people all dressed in gold and fight with swords." I wish that was a side hustle of the NBA.

3. Eldest brother Matt is back after a stint in rehab, and it is very clear that it was a good thing for him. He acts much less manic than in previous seasons, and it even seems like his accent sounds more "normal." He goes on a solo hunt (well solo except for the camera crews that were with him) to help him spiritually reconnect with the land and to help provide for his family. We'll see if it worked in the coming episodes.

4. The inhabitants of Browntown use machetes a lot. There were multiple scenes showing the Brown family members clearing areas of land. Bear, Bam, Billy and Gabe all were seen hacking away at brush with machetes. Part of me wonders if this was an easy way to get shots of the Browns looking "extreme" without much effort, like a producer just handed them machetes and said, "go attack the land."

5. According to Billy, last year was the worst year of their lives, and he's committed to getting back to the Bush life. Considering his son went to rehab, he and his other son were convicted of Permanent Fund dividend fraud, his long-lost daughter Twila came back and he had to go to the Lower 48 for medical treatment, it was definitely a drama-filled year for the Brown family.

But if this show turns into just them "living" in the Bush it will become the most boring, and most tone deaf, of all the Alaska reality shows. People watched and continue to watch "Alaskan Bush People" to see what crazy things happen to the Browns, not because they care what the Browns can make with some old tires or how to transport a cow over water.

We'll see how this season progresses, on Wednesdays at 8 p.m. on Discovery Channel.