North Slope oil has hit $70: What that means to Alaska’s economy, the oil industry and the state treasury 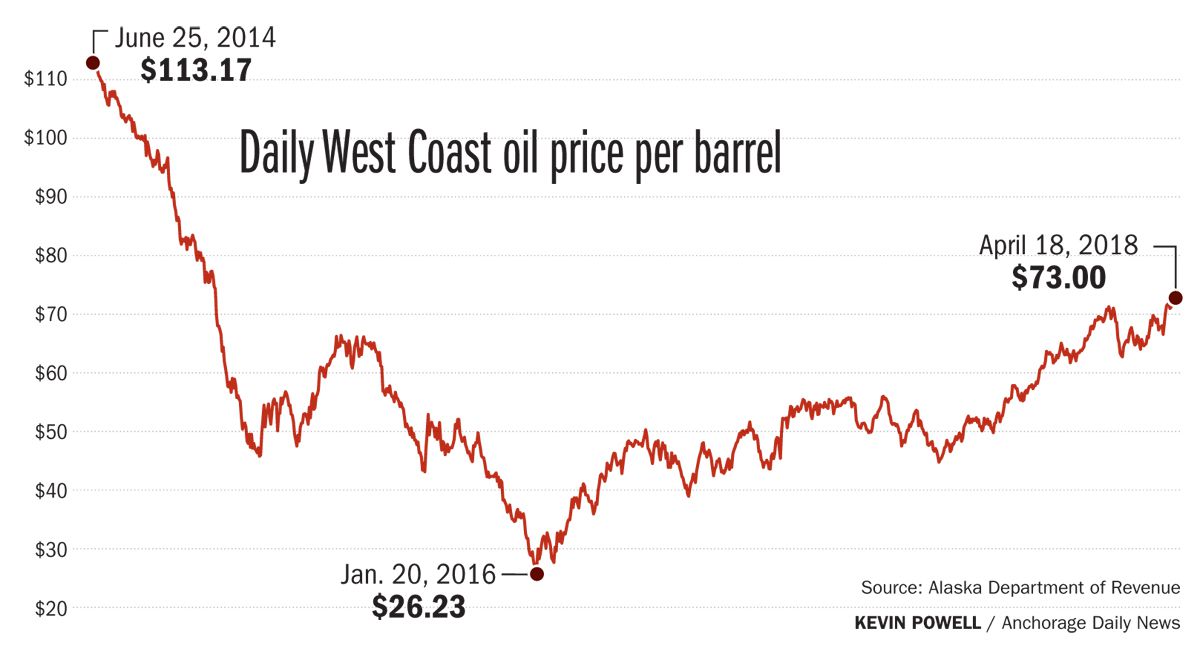 North Slope oil prices this week rose to their highest level in more than three years, helping boost optimism that the battered Alaska economy could slowly be reversing course.

"I have no doubt the higher prices are having a positive impact on the economy," said Neal Fried, an economist with Alaska Department of Labor and Workforce Development.

Exactly how much is hard to know at this point, Fried said.

But there have been positive signs as North Slope oil prices reached $73 on Wednesday, with geopolitical tensions growing in the Middle East and elsewhere.

"Last year, companies were laying people off," Fried said. "This year, in some cases, companies are actually hiring some people."

The higher price has led Petroleum Equipment and Services, providing drilling-related equipment and work to the oil industry, to anticipate additional work and add two employees to a staff of 20, said owner Kevin Durling.

He said large oil companies are becoming profitable again after slashing expenses following the drop in oil prices that began in 2014. Work is modestly rising for industry support companies such as his.

Daily Alaska North Slope prices, as estimated by the state Department of Revenue, reached $70.22 on April 10 and have remained above $70 since.

Improvements to the economy and hiring are expected to be gradual, assuming oil prices stay where they're at or keep rising, economists said.

"(The price) is a great place to be and we hope it stays here, but it's way too early to really make an impact," Logan said.

Several projects could benefit, including ones that Oil Search and ConocoPhillips are pursuing in the western North Slope, he said.

"There's more reasons for optimism than pessimism," King said. "I think we'll start to see slow growth or at least a stabilization."

BP,  which has stabilized oil production at the large Prudhoe Bay field while cutting costs there, isn't counting on a big, long-term rise in prices, BP Alaska president Janet Weiss has said.

BP needs to continue "building momentum for Prudhoe's competitiveness in our lower-for-longer price environment, even when we see prices march up in the short term," Weiss has said. "And to do that we'll need to continue to embrace new ways of working and responding to a very competitive environment."

The recent oil prices will have a material impact on state revenue if they can be sustained.

"(It's) a bit of good news but by no means a lifesaver," said Ken Alper, director of Alaska's Tax Division.

Oil prices have reached a point that the state budget receives an extra $80 million annually for every $1 increase in the yearly average oil price, he said.

That's up from $30 million when oil prices were at $60 a barrel, such as in the fall, because of the way the tax system is designed.

But there are caveats to the extra revenue, including that as prices rise, spending by the oil industry is expected to increase, Alper said. Extra spending reduces the per-dollar increase in state revenue.

Dave Cruz, owner of Cruz Construction, which builds snow roads and provides other services for oil companies, said he's just had his worst winter on the North Slope in 10 years. He kept about 50 workers employed through the exploration season, down from about 200 in past winters.

Cruz said a benefit of higher oil prices is that they supported a large exploration season by ConocoPhillips. Without that work, there would have been few opportunities on the North Slope, Cruz said.

But he said the rise in oil prices is less important to the economy than the $800 million the state owes oil companies for tax credits. The state has slowed those payments dramatically in recent years to help reduce its large deficit.

The extra income from higher oil prices can help completely pay off those bills, Cruz said. Doing so would spark more companies to pursue projects.

"All we have is our word," he said. "When the state doesn't fulfill its obligation, people don't want to do business here."