Alaska’s last 2 Blockbuster stores are closing, leaving just one in the U.S. 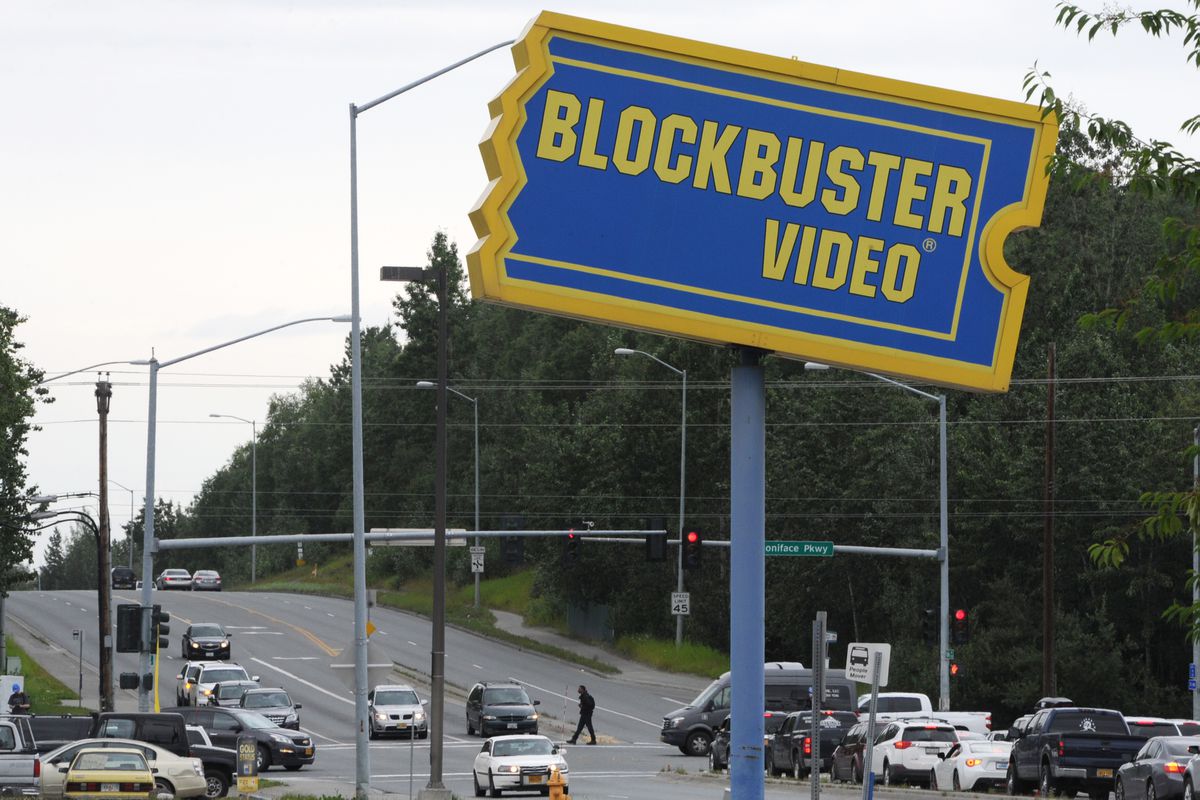 The Blockbuster Video on DeBarr Road is one of the last two Blockbuster stores remaining in Alaska, and both are set to close. (Bill Roth / ADN archive)

The Blockbuster Video on DeBarr Road is one of the last two Blockbuster stores remaining in Alaska, and both are set to close. (Bill Roth / ADN archive)

The two remaining Blockbuster stores in Alaska are set to close, marking the end of an era in what has long been one of the video rental business's last strongholds.

The stores, one on DeBarr Road in Anchorage and the other in Fairbanks, will close Monday for rental business, a post on the Facebook page for Blockbuster in Alaska said Thursday afternoon. They will reopen at noon Tuesday for an inventory sales that will run through July and August.

The closures leave just one store standing in the U.S., in Bend, Oregon.

[Even in Alaska, Blockbuster is fading. 'We're just managing the decline as best we can.']

Thursday's news follows a smattering of other recent Blockbuster closures across the state, which had 13 Blockbusters in 2013 and was down to nine stores by 2016.

"It's tough to tell the customers, it really is," said Kevin Daymude, the general manager at the DeBarr location. "They are like family. It's hard to say goodbye."

As Blockbuster stores disappeared from most of the Lower 48 in recent years, the brand long managed to persist in Alaska. Some have said expensive internet here is one reason why. The stores have also been a destination for some who visit just for the nostalgia.

For years now in Alaska, announcements have cropped up every few months that another Blockbuster will shut its doors. The Wasilla, North Pole and Soldotna stores closed this year, as did another Anchorage location near the intersection of Old Seward Highway and Huffman Road.

Alan Payne, who owns the Alaska stores through a Texas-based Blockbuster licensee called Border Entertainment, said he and his team determined about nine months ago that it wouldn't make sense to renew any more leases on the stores that remained. The leases on the last two Blockbusters are up at the end of August.

The last locations are still making a profit, he said Thursday, but that profit has been declining at a rapid pace.

"It's always kind of a kick in the pants every time we close a store. But it's been going on for so long that the shock has worn off, frankly," said Payne, who is based in Austin. "This is not going to come back. We can't string this out any longer without creating some financial problems."

Border Entertainment used to own Blockbuster stores in Texas, too, but those have also closed. Alongside Blockbuster, there are also other independent video stores in Anchorage and Fairbanks.

It's not just streaming services that have hurt the video rental business, Payne said, attributing the decline in part to how smartphones and social media have changed the way people spend free time.

Then, there are the people who go to Blockbuster but don't even come inside. A Facebook post near the end of June on the Blockbuster Alaska page read, "We see you out there taking selfies in front of our stores, show them to us!"

Kelli Vey, the district manager for the Fairbanks area, sees people in summer and winter alike hopping out of their cars to snap photos and then drive off.

"I wish they would come in and buy something," she said. "All day long, I joke that I need to put a picture of somebody in the window to photobomb them."

A real life functioning Blockbuster! Hits me right in the feels💙💛

In the Fairbanks area, Vey said the challenge of getting speedy, affordable internet service is one thing that brings people to the store. The news of the closure has been devastating to regular customers, she said.

"It's kind of emotional," she said. "I'm getting some tears, getting lots of hugs."

"The memorabilia is probably going to go back to the owner, which is fine, because I don't want a jockstrap in my house," Daymude said.

It's not clear yet what will happen to the memorabilia, Payne said. He added that his team had explained to people involved with Oliver's show that the stores would probably not be open much longer.

At the Bend location, general manager Sandi Harding said there are no plans to close. She was shocked to learn that her store will soon be the only one in the country.

"Alaska had always been — I always thought they'd outlast us," she said. "If you'd asked me 14 years ago, there's no way I'd thought we'd be the last one. It just seems a little crazy."

Last two Blockbusters in Alaska are closing. It's a sad day for us.