The name is hagfish but you can call it a ‘slime eel’: Meet a fledgling Alaska fishery 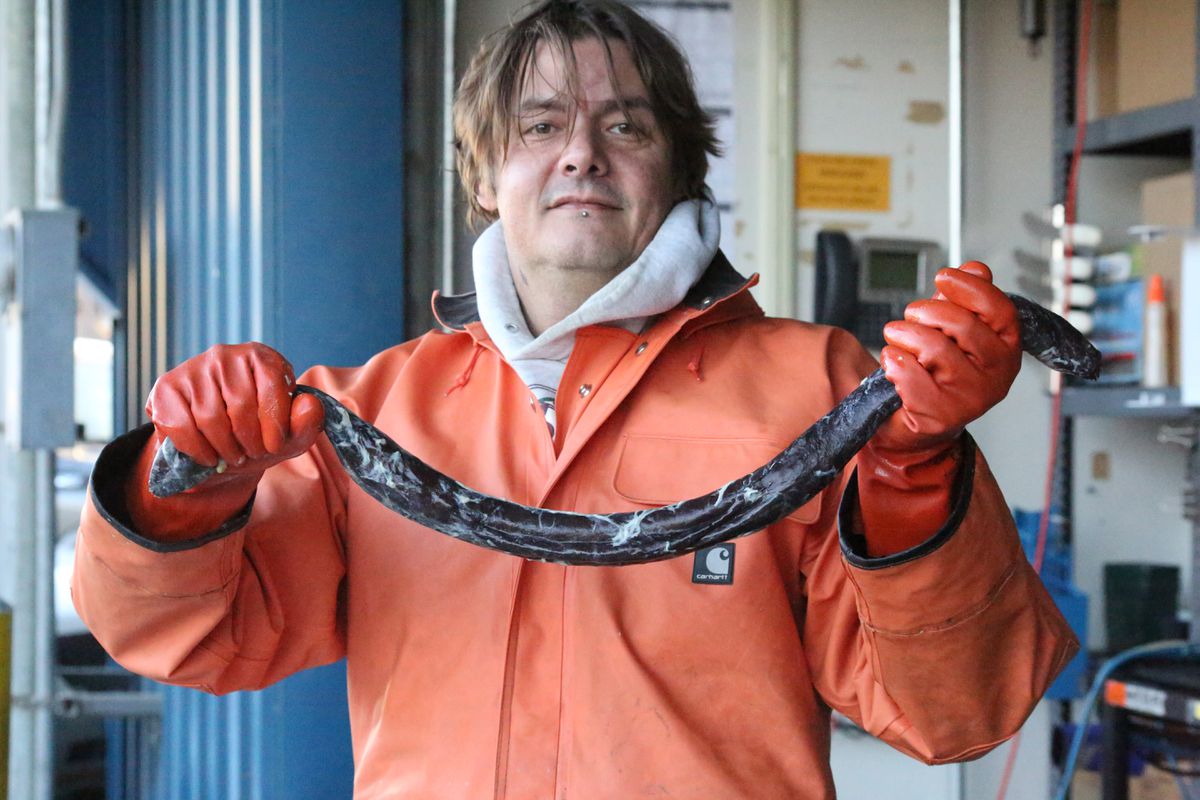 Aaron Baldwin, a biologist with the Alaska Department of Fish and Game, holds a hagfish in October, 2016. At more than two-and-a-half feet long, that hagfish "turned out to be the largest black hagfish yet known," Baldwin said. (Photo by Brandi Adams)

Aaron Baldwin, a biologist with the Alaska Department of Fish and Game, holds a hagfish in October, 2016. At more than two-and-a-half feet long, that hagfish "turned out to be the largest black hagfish yet known," Baldwin said. (Photo by Brandi Adams)

Maybe you’ve never heard of these deep ocean creatures, also called “slime eels” for their eel-like appearance and ability to secrete huge amounts of opaque slime. Not exactly a mouth-watering description at first glance; yet over the past two years, a small-scale effort has developed in Southeast Alaska to harvest these fascinating uggos as a fledgling Alaska fishery.

That’s unusual news in a state where most fishery resources are already developed.

“There really aren’t too many species that we’re aware of where there is potential for growth that isn’t being taken advantage of,” said Forrest Bowers, acting director for the commercial fisheries division at the Alaska Department of Fish and Game. “So with hagfish, this is something totally new. We hadn’t been fishing for them. It’s like, finding a new species of salmon or something you’re going to fish for.”

The young fishery is just outside Ketchikan, in the Clarence Strait area. In Alaska waters there are two kinds of hagfish, Pacific and black. Fishermen here primarily catch the latter.

And then there’s the slime. Whitish and opaque, it calls up thoughts of Flubber.

The creatures have a “pre-slime molecule" that can expand to 20 times the molecule’s volume — or more — when it comes in contact with water, said Aaron Baldwin, a fisheries biologist with Fish and Game. That creates a slime that feels sort of like liquid latex to the touch, he said.

The creatures don’t have a jaw, simply a mouth and a tongue, said Baldwin. They are still classified as vertebrates even though they lack vertebrae, “which is sort of counter-intuitive,” he said.

Other hagfish facts compiled by the University of California Museum of Paleontology: They have three "accessory hearts,” they “may change sex from season to season,” and “will ‘sneeze’ when their nostrils clog with their own slime.”

“An unusual species for sure,” Bowers said.

The creatures burrow into fish on longlines or traps and eat the flesh, leaving slime and bone, Baldwin said. Hagfish secrete their slime when threatened, and also use it as a “lubricant" when they burrow into fish or dead mammals. Commercial fishermen even avoid areas where there is known to be a high abundance of hagfish, he said.

This isn’t the first time Alaskans have tried to ignite a hagfish fishery. There was also an effort made in the 1990s, said Andrew Olson, the Southeast Alaska groundfish project leader at Fish and Game. Hagfish fisheries in Korea and Japan collapsed in the 1980s and 90s and then the fishery took off along the West Coast, in waters off Washington, Oregon and California, according to Fish and Game.

“In Southeast (Alaska), it just didn’t work out,” Olson said.

“A lot of guys down in Southeast, they like to fish whatever they can,” said Olson. “Hagfish is one of those things that hadn’t been revisited and they just wanted to try it out and something ended up sticking this time.”

Hagfish catches off Oregon and Washington climbed between the early 2000s and 2013 but have dropped off since then, Baldwin said.

Fishermen typically catch hagfish using pots baited with fish parts, and the pots are hooked to a longline. The hagfish get into the pots and then can’t get back out.

Korea is the main market for slime eels, Baldwin said. The meat is sold there for food and the skin used for leather. The slime is even used as an egg substitute.

There are fewer than three fishermen with permits to pursue hagfish in Alaska, Olson said. He declined to name them or give a more exact number, citing confidentiality because of how few participants are involved.

The fishing season for the creatures is year-round, which provides a winter fishing opportunity. Up to 120,000 pounds of hagfish can be caught each year in the state, under current quotas.

Baldwin, the Fish and Game biologist, said the slime is being studied for new potential uses including stitches to close wounds and even clothing fibers. Still, people aren’t exactly clamoring for hagfish permits.

The slithering creatures can be a bit off-putting to potential fishermen, Olson said. "The slime makes a mess on deck.”

“The gross factor, I think, definitely deters people,” he said. “We’ve done a lot of outreach stuff ... but we haven’t really had anyone knocking down our door to go fish for it.”