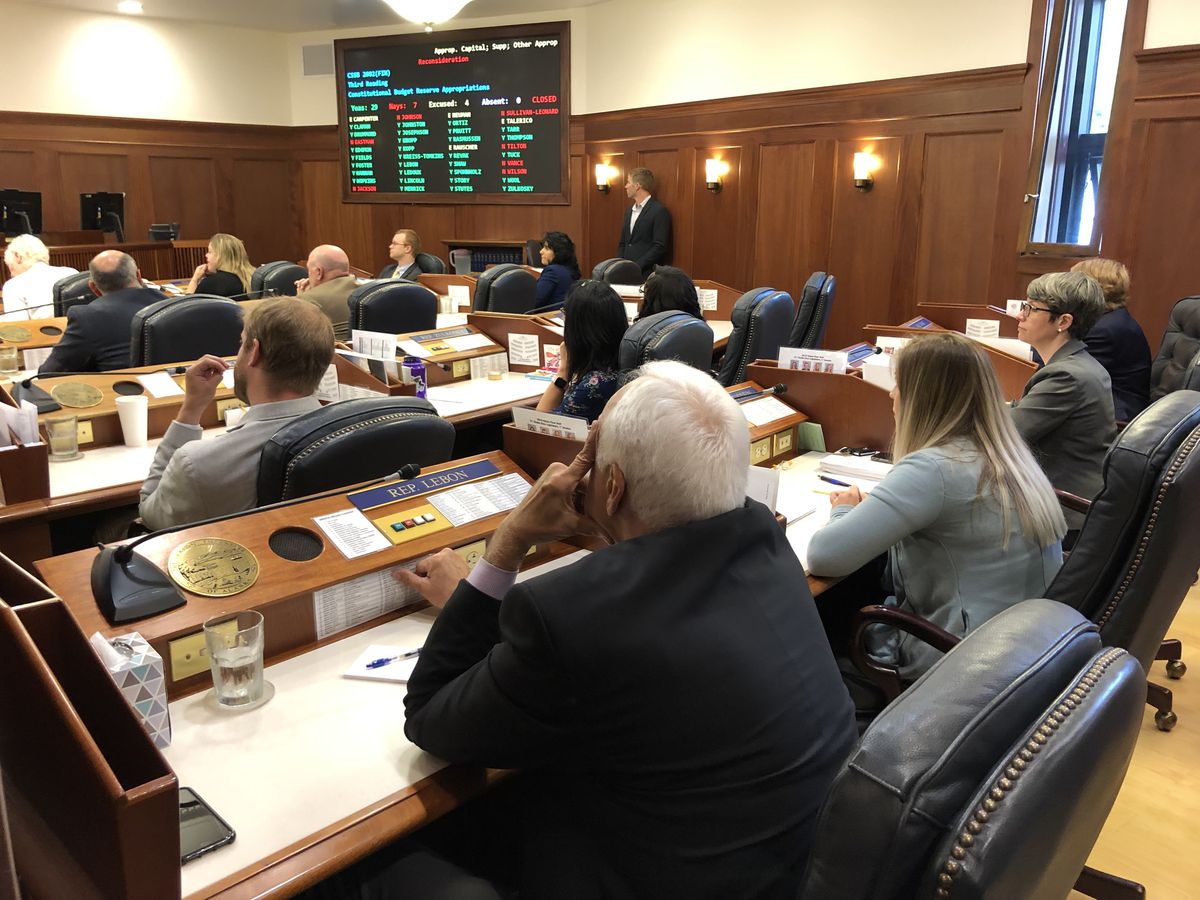 JUNEAU — The Alaska House of Representatives on Monday again failed to approve a fix for the state’s capital budget and the reverse sweep. The 29-7 vote on Senate Bill 2002 was enough to pass the bill but not enough to fund it. Thirty votes are needed to spend from the state’s Constitutional Budget Reserve, and the bill was written to rely on funding from that reserve.

Without a completed capital budget and a successful reverse sweep vote, dozens of state programs will be de-funded this year, and the accounts that would have funded them in the future will also be erased. According to the Office of Management and Budget, at least $115 million will be removed from the state operating budget atop the $444 million vetoed by Gov. Mike Dunleavy.

Later Monday, the House Finance Committee approved a bill that would mostly reverse those budget vetoes and pay a $1,605 Permanent Fund dividend this year. That legislation could be considered by the full House of Representatives as early as Tuesday.

Meanwhile, the University of Alaska Board of Regents has voted to declare “financial exigency” in response to the budget vetoes. A failed capital budget and reverse sweep would exacerbate the university’s situation; money would not be available to pay student scholarships, and fewer students will be able to afford the university.

“This bill not passing is having immediate impacts, and Alaskans are understandably nervous and angry as they witness continuing gridlock in Juneau. Jobs, scholarships, and vital services are all on the line,” said Speaker of the House Bryce Edgmon, I-Dillingham, in a prepared statement. “We are not giving up hope. We thank everyone who voted for the capital budget and for the growing commitment to find compromise on this issue and the many other challenges ahead.”

Monday’s vote was a reconsideration vote of a 25-8 defeat on Sunday. (The bill passed the Senate 19-0 on Saturday.) House Minority Leader Lance Pruitt, R-Anchorage, was a “no” vote Sunday and a “yes” vote Monday. Three lawmakers who were excused absent Sunday arrived Monday and voted “yes.” They were Reps. Sara Rasmussen, R-Anchorage; Josh Revak, R-Anchorage; and Laddie Shaw, R-Anchorage.

“I think that the capital budget is critical to the state and close to my heart is the WWAMI program, and I’ve worked very hard to preserve it,” Revak said after the vote.

The House rules allow the possibility of one more re-vote. With 21 legislators in favor, lawmakers could rescind the vote they took Monday and try again.

“It’ll happen at some point,” Edgmon said of the third vote.

On Monday, as on Sunday, members of the Republican House minority said they were unwilling to vote for the bill unless the Alaska Legislature first agreed to pay a $3,000 Permanent Fund dividend using the traditional formula in state law.

“How can we work together so that everyone wins something?” said Rep. Sarah Vance, R-Homer, after the vote.

Because the House’s coalition majority has 23 members, it can pass most legislation on its own. In this case, it needs the support of the 16-member Republican minority. (There is also one independent Republican, Rep. Gabrielle LeDoux, R-Anchorage, who is not a member of either caucus.)

Rep. David Eastman, R-Wasilla, opposed the bill both Sunday and Monday, pointing out a section that he and other minority lawmakers believe requires them to give up their leverage.

“What I see as the vote before us right now is solely dealing with section 17 of the bill,” said Rep. David Eastman, R-Wasilla. “And section 17 of the bill makes it fairly clear that the vote before us really serves one fundamental purpose, and that is to undermine the ability of myself, other members of the minority, to participate in budget discussions going forward.”

One part of that section allows the Legislature to spend $250 million from the Constitutional Budget Reserve for any as-yet-undesignated purpose. Similar clauses have been included in past budget bills to address costs that are not yet known — things like earthquakes, wildfires, Medicaid overages, or the proposed trans-Alaska natural gas pipeline.

[What’s the ‘reverse sweep’ and why has it become an issue in Alaska’s budget deadlock?]

The Legislature still must approve the expense, but that approval only requires 21 votes and could be done without the minority.

Another part of the section allows the CBR to be used automatically if oil prices suddenly fall. That clause typically takes effect on a specific date, but because lawmakers do not know when they will agree on the amount of this year’s Permanent Fund dividend, this year’s clause would take effect upon the passage of HB 2001 “or a similar bill.”

That alarms members of the minority, because HB 2001, as currently written, pays a $900 Permanent Fund dividend. Without knowing what “a similar bill" will look like, they’re unwilling to vote for that clause.

“These are different times, Mr. Speaker, and I do not recall ever giving up my vote in advance of knowing what is in the bill,” said Rep. Cathy Tilton, R-Wasilla.

“This is not something that’s been thrown in substantially different from what’s been done before,” said Rep. Neal Foster, D-Nome and co-chair of the House Finance Committee.

Rep. John Lincoln, D-Kotzebue, urged minority members to realize that their votes on this bill don’t mean they will lose their leverage.

“Whether they refer to the minority as a ’22 strong’ or a ’22 wrong,' it’s indisputable that there is a huge amount of power and clout, and so the arguments that I hear for not approving this bill ... it just doesn’t resonate in terms of losing leverage,” he said.

Lincoln’s reference to “22” indicates the number of lawmakers in the House and the Senate who attempted to convene a special session in Wasilla in support of the traditional dividend.

After his speech, the vote failed.

In a 10-1 vote, University of Alaska Board of regents declare ‘financial exigency’