BP is leaving Alaska. So what’s going to happen to its big office building in Midtown Anchorage? 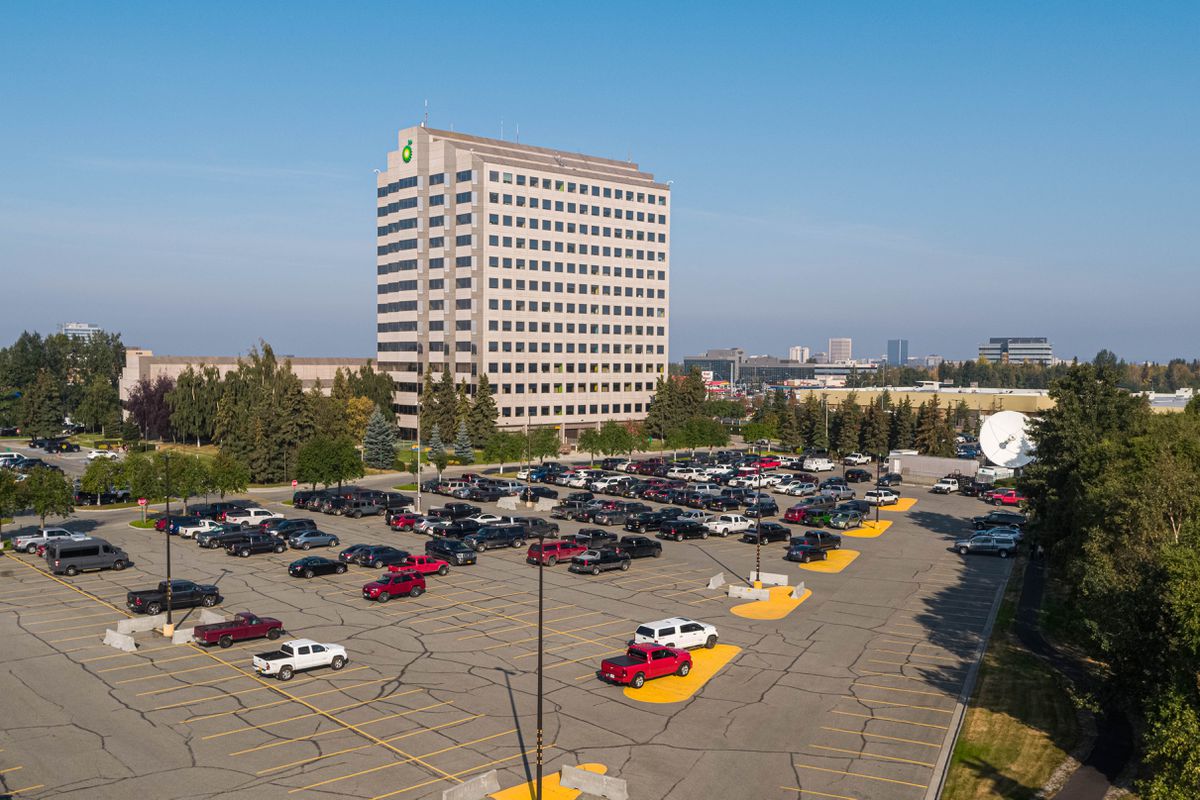 The BP building in Midtown Anchorage on Tuesday, Aug. 27, 2019. BP announced that it plans to sell all of its Alaska assets to Hilcorp Alaska for $5.6 billion. (Loren Holmes / ADN)

The BP building in Midtown Anchorage on Tuesday, Aug. 27, 2019. BP announced that it plans to sell all of its Alaska assets to Hilcorp Alaska for $5.6 billion. (Loren Holmes / ADN)

BP operations in Alaska date back more than 60 years. The company has had significant investments on the North Slope, specifically Prudhoe Bay, and almost half ownership in the trans-Alaska pipeline. Now, we know they are on their way out, selling their remaining Alaska assets to relative newcomer Hilcorp, a privately owned company.

All BP’s Alaska operations and upstream business are headquartered at its iconic Anchorage office building on the corner of Benson Boulevard and the Seward Highway; you can see its unique yellow and green helio lit up on the side of the building for miles around. While the company has been selling some assets to other producers since at least 2015, the news of its departure poses big questions.

What does BP’s departure mean for the commercial real estate market? First, some history.

BP’s Anchorage headquarters is a 15-floor, 324,000-square foot, class A office building. It was built from 1983 to 1985, and the entire campus is 18 acres and includes a cafeteria and atrium. It is one of the most recognizable buildings in Alaska. (The company also built and operates the BP Energy Center, a building in midtown where nonprofit groups can meet for free. The Energy Center is the only Alaska asset not included in the sale to Hilcorp and BP has said it will remain in Anchorage “as a legacy.”)

The first phase of development was as an office building, with enough land to be able to accommodate a second tower if Alaska’s operations required one. In addition, it was designed to be able to convert to into a hotel when and if the time came for such a transition.

In Anchorage, the office Class A market vacancy rate was 15% in January. The market has continued to soften due to state budget concerns, with companies contracting and minimizing their occupancy costs. In the midst of this, BP attracted a new tenant to its building — Oil Search. This rapidly growing oil company relocated to this building from downtown, and has announced plans to ramp up with more employees in Alaska as it develops the exciting new Pikka development.

It is unknown what BP will do with its existing work force, although we can reasonably assume that some employees will be retained, some will move to other BP locations, and some will be laid off and potentially picked up by other oil and gas companies. The other unknown is what BP will do with the remainder of the lease space and the remaining committed lease term as it prepares to transition out of Alaska. The continued softening of rental rates and rising vacancy rates has been the trend in 2019, and the Anchorage office market is going to feel the impact if BP’s current occupied space is vacated and available for lease. If Hilcorp moves into the BP building, the immediate impact will be lessened, though questions about how long they plan to stay there remain.

In the end, from a commercial real estate perspective, more questions are being asked than answered right now. It serves as a vivid reminder that change is the only constant in Alaska, whether in politics, the economy, or real estate. These types of events can be unsettling, but also present new opportunities. Office space owners and renters would be wise to take advantage of them.

Brandon Spoerhase is a lifelong Alaskan and a former member of the city Planning and Zoning Commission. He specializes in commercial and investment real estate and is the Broker for BSI Commercial Real Estate.