As Anchorage slowly reopens, city is warned of two possible paths — a slow recovery, or none at all 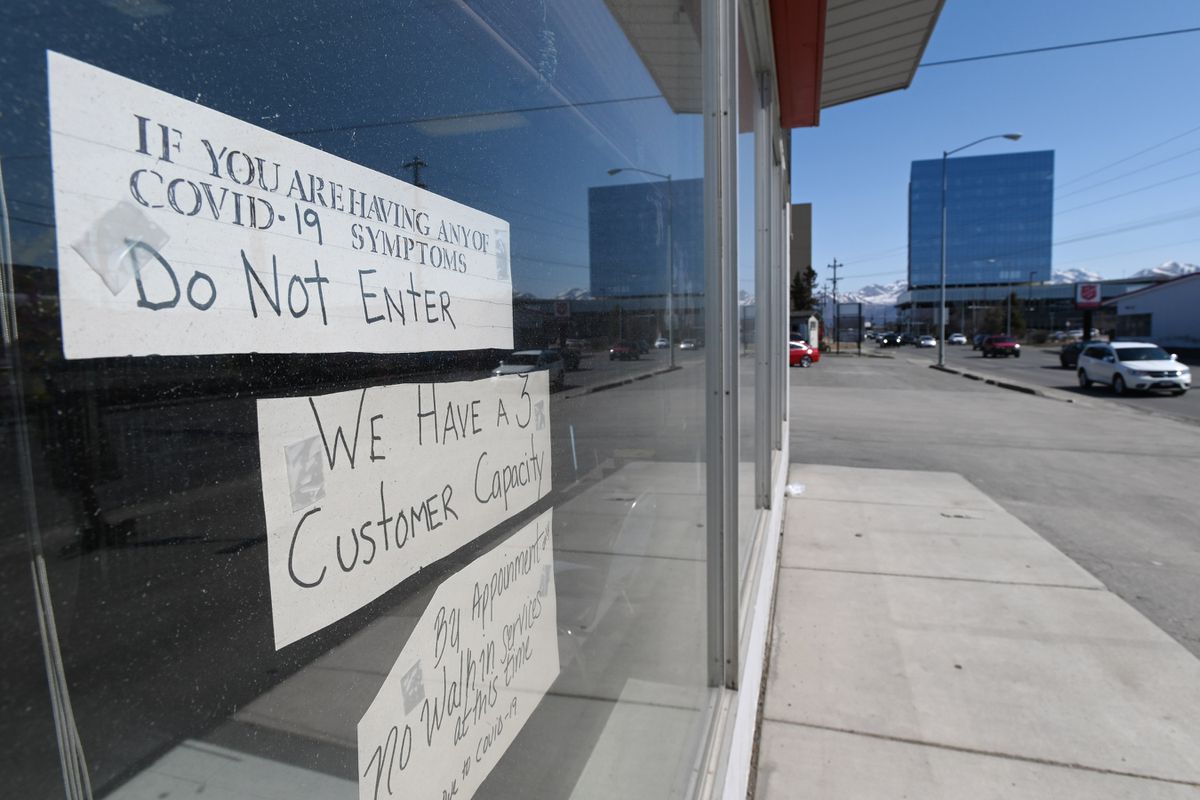 Bev's Dog Grooming on Northern Lights Boulevard put up signs on Monday, April 27, 2020, as they prepared to reopen for business during the coronavirus pandemic. (Bill Roth / ADN)

Bev's Dog Grooming on Northern Lights Boulevard put up signs on Monday, April 27, 2020, as they prepared to reopen for business during the coronavirus pandemic. (Bill Roth / ADN)

Anchorage has allowed nonessential businesses to operate for more than a week, and on Tuesday began a multi-phase plan to give out grants to small businesses suffering from COVID-19-related closures.

But economists and business leaders say the recovery process will be drawn out, and the end result will not match the pre-pandemic business landscape.

“The ‘new normal’ is evolving, every day, every hour practically,” said Bill Popp, president of the Anchorage Economic Development Corp., during a community briefing Wednesday with Anchorage Mayor Ethan Berkowitz. “We don’t know what the ‘new normal’ ultimately will be.”

Popp was joined by Mouhcine Guettabi, an economist with the University of Alaska Anchorage Institute of Social and Economic Research, who said the a “V-shaped” scenario, where the economy rebounds as quickly as it crashed, is very unlikely.

“It was unrealistic to start with, and we are starting to see we have not completely contained the virus and spending patterns are not just going to rebound,” he said.

“The scenario we don’t want to see is an ‘L,’ where we drop in terms of economic activity and basically find a ‘new normal’ at the bottom,” Guettabi said.

A recent survey by the Anchorage Economic Development Corp. found that 40% of Anchorage businesses surveyed are worried about going under or are uncertain of their fate. A third of businesses laid off staff and 13% are going to close permanently

Statewide, an additional 8,718 people filed new jobless claims for the week ending April 25, said Lennon Weller, an economist with the Alaska Department of Labor and Workforce Development. That’s more than eight times higher than average, but the weekly amount continues to fall after hitting a record 14,590 one month ago.

Over seven weeks, 79,450 people have filed jobless claims, about 25% of the Alaska workforce.

“Joblessness does seem to still be rising, but for how long is tough to say,” Weller said.

Which businesses will live and which will die in the new environment is not clear, said Anchorage Economic and Community Development Director Chris Schutte.

“There is no guarantee, even for national chains, in a local economy,” Schutte said.

Guettabi said rapid delivery of financial aid to businesses and people is critical, along with continued efforts to contain the virus.

Restaurants, hotels and oil and gas companies are among the hardest-hit sectors during the pandemic, and represent close to half the Anchorage economy, he said at the community briefing.

Some businesses in those industries are at risk of closing permanently because of the restrictions, he said.

On Tuesday, at Berkowitz’s request, the Anchorage Assembly approved a $1 million transfer of general fund dollars to a pilot program that will give 100 small businesses $10,000 grants. The city expects the money to be paid back through the federal CARES Act.

The money will be given out to businesses through a lottery, but franchises will not qualify, even if they fall below the employee number and annual gross revenue thresholds. Also, businesses that only cater to people who are 18 and older, such as bingo parlors or liquor stores, do not qualify.

Financial aid is especially important for small companies with fewer than 20 employees, Guettabi said. Many don’t have much cash to keep them afloat for long.

Berkowitz said this period is an opportunity to develop different ways of doing business in Alaska. That includes spending more money locally and employing more Alaskans in positions that often have been filled by people from outside the state, such as in tourism or oil and gas.

“We cannot simply be nostalgic for the way we have been doing things,” he said.

While businesses are suffering, either due to government health mandates or from a lack of customers who fear contracting the virus, Guettabi said opening everything back up would be foolish.

The best economic policy, he said, is to focus on public health policy and endure the contraction of the economy until the virus has subsided.

“From a pure economic standpoint, the worst thing that can happen is multiple waves of outbreaks that would absolutely cripple the economy in the long run,” he said.