COVID relief for small businesses has expanded. Here’s what it looks like in Alaska right now. 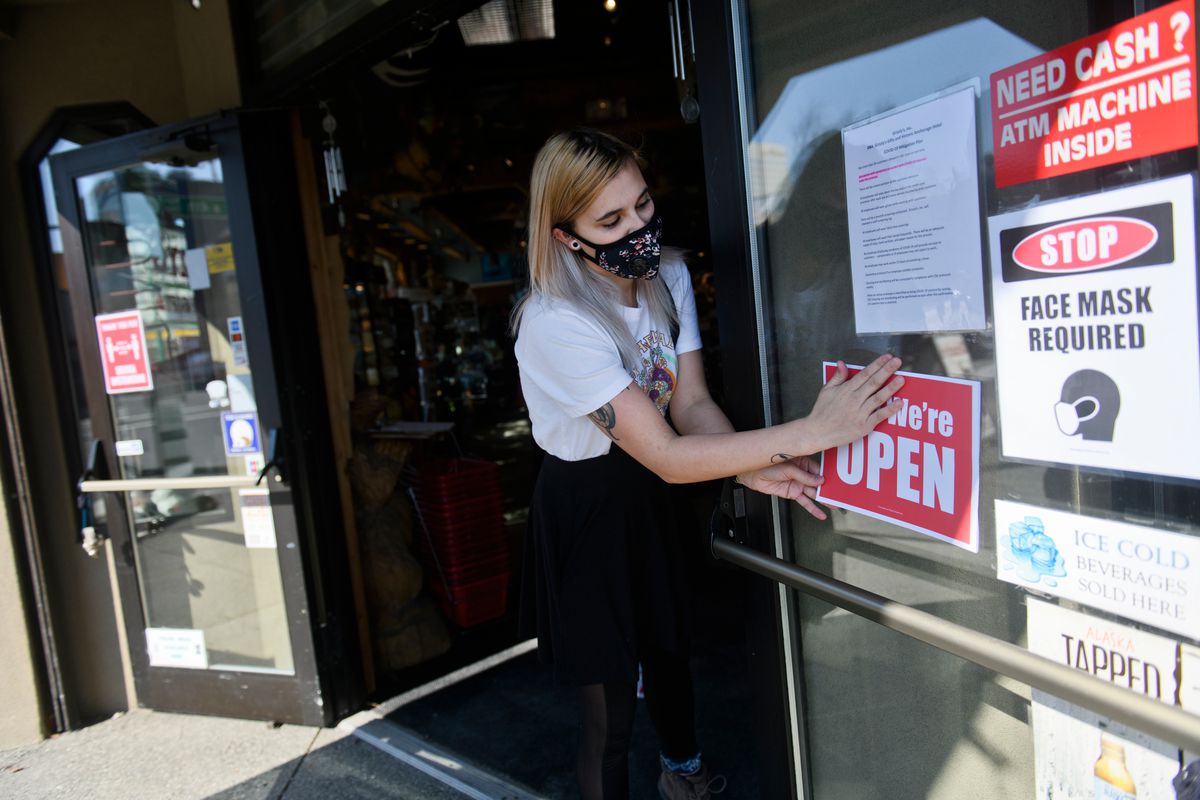 State and federal efforts to deliver massive amounts of aid to businesses during the COVID-19 crisis continue to grow, despite snafus.

The efforts have received praise and criticism in turn, as officials work rapidly to create new programs and deliver unprecedented amounts of funding. Those who have received help say they’re grateful, but demand has vastly outstripped supply.

According to figures from the Small Business Administration, only one in eight small businesses in Alaska has benefited from the most successful program, and other efforts — including the state’s own — have reached barely a handful of businesses.

The stakes are high: An Anchorage survey recently found one in six Alaska businesses is afraid they’ll go under during the pandemic.

In a fourth major bill addressing the crisis, Congress last week replenished funding for the disaster loans and the Paycheck Protection Program, after the money quickly ran dry in mid-April.

Many small businesses in Alaska have benefited from the loans, while others await assistance.

[State and federal aid is starting to arrive for some Alaskans, but not all]

Here’s an update on some of the loan and grant programs for businesses, as well as future opportunities for aid.

This program has not yet begun accepting new applications following the new funding round.

Kevin Wynne, a spokesman with the Small Business Administration, said he doesn’t know when that will resume.

In the first phase, Alaska received only eight disaster loans totaling $3.1 million, the lowest in the nation, according to an April 24 SBA report. The program distributed $8 billion nationally. (Alaska trailed Hawaii with 17 loans, and South Dakota with 36. California led with 8,985 loans.)

The Alaska delegation has demanded answers from the SBA. The agency plans to issue an “after-action report” exploring what happened, said Wynne. He said he could not speculate on a cause.

The disaster loan is not working for Alaska like it should, said Sen. Lisa Murkowski, in town hall video-conference on Thursday.

Congress replenished the loan and grant program with $60 billion in the latest round of COVID aid.

Existing applications that were not finalized remain in line, on a first-come, first-serve basis.

Murkowski said that Treasury Secretary Steven Mnuchin told her on Thursday that the agency is moving ahead carefully with the re-launch of the loan and grant application.

“They don’t want it to be as bad as the startup of the replenished (Paycheck Protection Program) fund this week and so they are taking this one a little bit slower,” she said.

Applications for this program, known for supporting payroll and other basic costs with forgivable loans, resumed Monday.

Several Alaska businesses have reported receiving this loan, but others await approval through their banks. Alaska businesses received 4,842 loans and $922 million in the first round. The original $349 billion was locked up by applicants in less than two weeks.

Congress provided $310 billion for the current second round. After five days, as of Friday, more than half the money was committed.

Alaska businesses in Round II had been approved for 3,920 loans and $339 million, from $176 billion committed of Friday. Alaska leads a handful of states, including North Dakota and Wyoming in dollar terms.

Problems have ranged from technical glitches during the application process to complaints that large public companies have benefited at the expense of small businesses.

Alaska’s senators have taken steps to address the problems, including fighting for a recent administrative change that provides flexible loan opportunities for seasonal business common in Alaska.

The PPP loans and other assistance have been incredibly helpful to businesses, said Jonathan White, a member of Anchorage’s Economic Resiliency Task Force and owner of SteamDot Coffee.

But while the PPP loans can be forgiven if they’re properly spent, they’ll run out after eight weeks, he said Friday in a community update by the city.

If the economy doesn’t return to some version of normal by then, many businesses will be right back in the same boat, with limited cash flow.

“Once that funding is exhausted, whether you’re forgiven or not, you’re sort of at the end of the plank again,” he said.

There hasn’t been enough assistance reaching all sectors and businesses in Alaska, even though they’re being asked to reopen, he said.

Friday, May 1, 2020 Community Briefing: Today, the Mayor will be joined by his Chief of Staff Jason Bockenstedt and Jonathan White, owner of SteamDot Coffee and a member of the Economic Resiliency Task Force. Natasha Pineda, Anchorage Health Department Director and Chris Schutte, Director of the Office of Economic and Community Development will also be on the briefing. Anchorage residents may ask their questions in the comments of the Facebook Live. Time permitting, we’ll include them during the Q & A portion of the briefing.

Posted by Mayor Ethan Berkowitz on Friday, May 1, 2020

In late March, the Alaska Industrial Development and Export Authority’s board of directors voted unanimously to create the “Sustaining Alaska’s Future Economy Guaranty Program,” which allows Alaska businesses with existing loans to apply for an extension of their loan if they need immediate cash.

Extensions, which can be up to $1 million, will be guaranteed by AIDEA to reduce the risk for the bank. The terms of the loan would be up to the individual bank.

AIDEA said it has received over 100 calls of interest for the program, but it has not published any figures for how many loans have been issued.

Gov. Mike Dunleavy has earmarked $290 million in federal coronavirus aid for state small-business assistance. Under the governor’s plan, AIDEA will administer a “Direct Lending Program” for small businesses and nonprofits who cannot obtain PPP, EIDL or other federal aid.

AIDEA’s interim executive director told a legislative committee Friday that it is still working with an Alaska bank to figure out how that money will be distributed.

According to information provided to lawmakers, the program will target businesses who have 50 or fewer employees (seasonal workers would not count against that limit), loans would be between $5,000 and $100,000.

The program needs between $150 million and $250 million, officials said, in order to reach “over 3,500 to 5,000 Alaska businesses and nonprofits with meaningful impact.”

AIDEA is part of the Alaska Department of Commerce, and that agency is promoting its existing small-business loan programs as options for pandemic-affected companies.

The department has a small business economic development loan program that offers up to $300,000 and a low fixed interest rate. The state’s Rural Development Initiative Fund offers loans for businesses in towns off the road system with populations of 5,000 or less. The department’s Microloan Loan Program offers up to $35,000 per person for Alaska residents.

The availability of each of those loans is subject to available funding, but each program could receive an injection of cash under the governor’s plan.

The governor’s proposal also calls for distributing $568.6 million in federal aid to cities and boroughs across Alaska. That aid could be used to fund municipal small-business-aid programs.

In Juneau, city officials have already approved a $3 million program for businesses in that city. Skagway, suffering from a lack of cruise ships, has taken similar action. Mayor Vern Halter of the Matanuska-Susitna Borough said this week that his government could offer a program as well.