In letter, Gov. Dunleavy makes economic case for Pebble mine while still not expressly supporting it 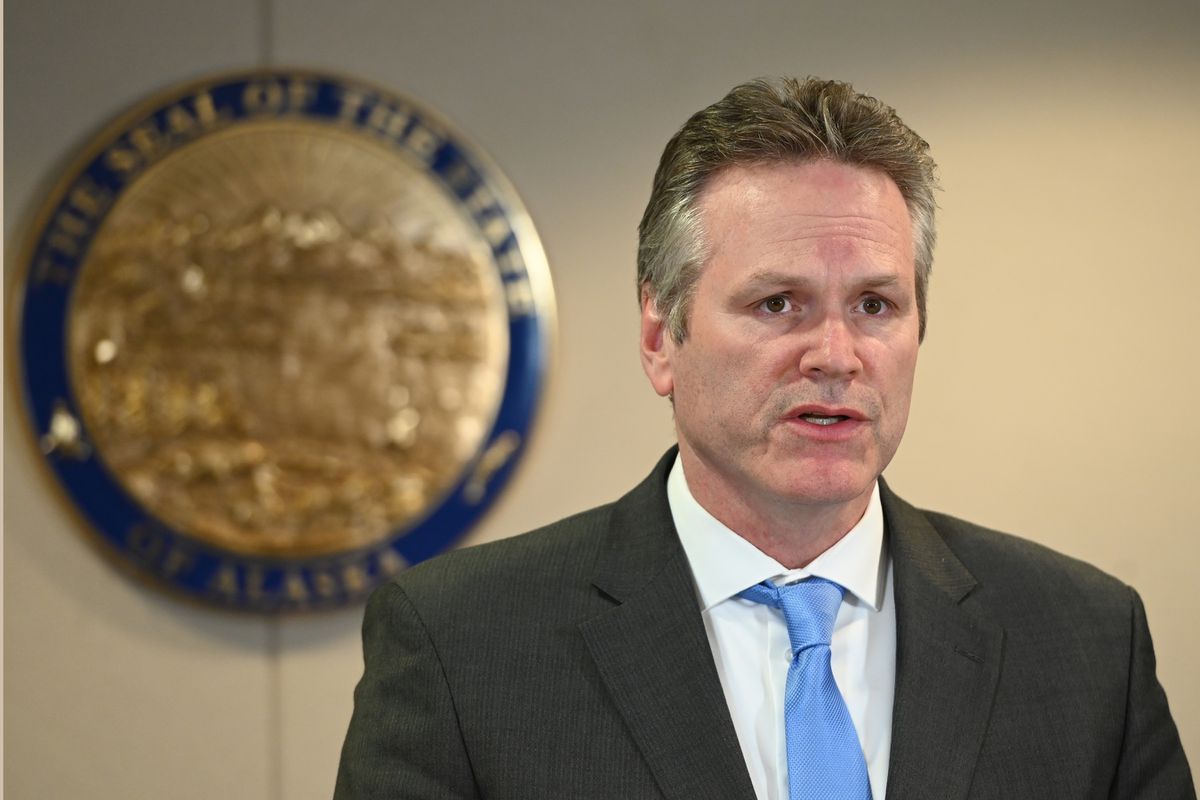 While stopping short of endorsing the controversial project, Alaska Gov. Mike Dunleavy on Tuesday laid out an economic argument for the Pebble mine and said he would not stand in the way of a rigorous state review of it.

Dunleavy made the case in a letter to two Alaska state lawmakers, House Speaker Bryce Edgmon, I-Dillingham, and House Majority Whip Louise Stutes, R-Kodiak. Stutes and Edgmon had written a letter asking him to withhold support for the project after the release of secretly recorded videos that showed Pebble executives boasting about their influence over the governor’s office.

The governor in his response said he is committed to a careful analysis of the project. But he emphasized the “generational poverty” and the “chronic lack of economic options” in the Bristol Bay region where the mine would be built.

He pointed out that the wild salmon fishery, which he said he won’t put at risk, does not operate year-round, contributing to high unemployment rates in the offseason and poverty levels more than twice the statewide average.

“No serious person would disagree that accessing the mineral deposits within the Bristol Bay Mining District, if done in a way that protects the watershed, would transform the lives of Alaskans living in the region,” Dunleavy wrote. “My role is to ensure that each project is subject to a fair and rigorous review process, and that every opportunity to create thousands of jobs is fully explored.”

[Leaked tapes and loose talk tarnished Pebble’s reputation. Can the proposed mine go on?]

The project would be built about 200 miles southwest of Anchorage. Critics have long argued it will destroy the Bristol Bay fishery.

The governor’s reply comes at a crucial time for the project, with the U.S. Army Corps of Engineers in the final stages of deciding whether or not to award the project a key construction permit that would lead to a three-year review by the state.

Stutes, who chairs the House Fisheries committee, and Edgmon, who represents the region where the mine would be built, asked Dunleavy in their four-page letter last week not to support a plan that Pebble is currently working on to compensate for the mine’s damage.

The Corps has requested the plan, and it appears the plan will need to use state land and win state support in order to be approved, the lawmakers' letter said.

The lawmakers highlighted the secretly recorded videos released by an environmental group showing former Pebble executive Tom Collier, who resigned in the wake of the tapes, and Ron Thiessen, president of Pebble parent company Northern Dynasty Minerals, discussing their influence over the governor’s office and the permitting process.

Dunleavy and others, including Northern Dynasty, have denounced the statements as false.

In their letter, the lawmakers said the governor has worked to advance Pebble. They cited examples including the governor’s apparent use of ghostwritten language provided by Pebble in letters to the Corps and to potential investors, as initially reported by CNN in December.

In his reply on Tuesday, Dunleavy challenged the lawmakers to present their plans for the future of the Bristol Bay economy.

Apparently singling out Edgmon, Dunleavy said it’s “disheartening” that a representative of economically depressed Southwest Alaska would “foment opposition to plans to address these inequalities.”

The governor pointed out that residents in northern Alaska have benefited from oil development through improved life expectancy, health care and education.

“It is my hope that we can work together to create this same type of success in Bristol Bay,” the governor wrote. “In the meantime, I will continue to advocate for responsible resource development projects for the benefit of all Alaskans.”

“Governor Dunleavy’s letter expressing blind support for large scale open pit mining in Bristol Bay shows he is completely out of touch with the people of Bristol Bay and the strong majority of Alaskans and is deep in the pocket of (Pebble Limited Partnership), a foreign mining company,” Bristol said.