In recordings, Pebble executives discuss influence with Gov. Mike Dunleavy and one day expanding the mine 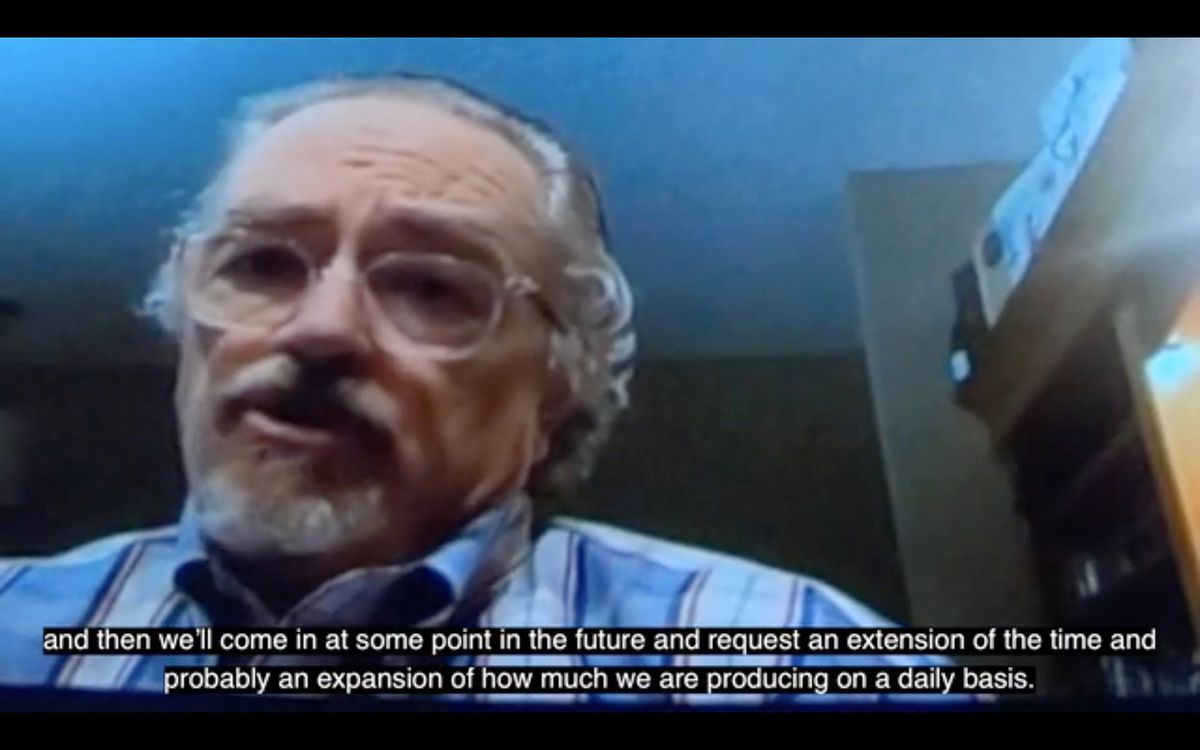 Tom Collier speaks on a video about expanding the Pebble mine in future years. (Screenshot from Environmental Investigation Agency's "Pebble Tapes")

Tom Collier speaks on a video about expanding the Pebble mine in future years. (Screenshot from Environmental Investigation Agency's "Pebble Tapes")

An environmental group released videos on Monday of Pebble mine executives privately discussing their pull with Republican Gov. Mike Dunleavy and other Alaska political leaders and the huge potential for expansion at the controversial Southwest Alaska copper and gold prospect.

The recordings, made by a Washington, D.C. group, the Environmental Investigation Agency, underscore longstanding criticisms by mine opponents about Pebble Limited’s political influence in Alaska and the White House.

The group hired people to pose as potential investors interested in the mine’s long-term prospects during video calls with the Pebble officials in August and September 2020, according to a written statement from the group.

• The executives describe their access to Dunleavy’s office and their strategies for reaching White House officials through the governor.

• They suggest Alaska’s U.S. senators are merely making political points when they express reservations about the project.

• They say the mine’s deposit could live on for two centuries, well beyond the 20 years the developer is currently pursuing as it seeks a permit from the U.S. Army Corps of Engineers.

The mine would be built near headwaters of the Bristol Bay salmon fishery, about 200 miles southwest of Anchorage. Critics fear it will destroy the fishery.

Pebble hadn’t had a chance to review the videos, according to a statement from Mike Heatwole, a spokesman for Pebble, on Monday. But Heatwole said the discussions about the project’s life are consistent with Pebble’s position that it has no plans for development beyond the 20-year plan.

“If at some time in the future, there is an interest in pursuing subsequent phases of development at Pebble, the proponents at that time will have to undergo a comprehensive, multi-year federal and state permitting process – likely under the National Environmental Policy Act,” the statement from Heatwole said.

Pebble has not heard of the group that secretly recorded the conversations, Heatwole said.

“I do think that anytime an interviewer from a made-up ‘investigative agency’ misrepresents who they are when they schedule an interview, then secretly tapes the interview without the knowledge of their subject, and then goes on to obscure their identity after the interview is broadcast, you have to know there are some pretty questionable ethics at play,” he said.

“We don’t know who has paid them or who they work for. We certainly intend to find out though, and to determine if any laws were broken by this despicable and abusive tactic,” the statement from Heatwole said.

Collier and Thiessen could not immediately be reached for comment on Monday.

Alexander von Bismarck, executive director of the Environmental Investigation Agency, said it has been conducting investigations into environmental issues for 30 years. He said no laws were broken.

With the federal government weighing a key construction permit for the mine, the group felt it was important to let people know what Pebble really thinks, he said.

In the video, Collier said he counts Dunleavy as a friend.

Thiessen discusses the strategy Pebble uses to reach White House chief of staff Mark Meadows to talk about the project. Rather than Collier reaching the White House, it’s better for Collier to talk with Dunleavy, who can make that call to the chief of staff, Thiessen said.

“I mean, we can talk to the chief of staff of the White House any time we want,” Thiessen said in the recording. “You want to be careful with all this because it’s all recorded. Every telephone call that the chief of staff to the White House has to be recorded. It’s not that they tape the call, it’s just that it’s recorded that, ‘He had a call with Tom Collier, the CEO of Pebble Limited Partnership.' You don’t want to be seen to be trying to exercise undue influence.”

Dunleavy’s office responded on Tuesday, saying Collier and Thiessen are misrepresenting the governor’s views on Pebble and embellishing their relationships with government officials.

“The statements made in the videos by representatives from Northern Dynasty and the Pebble Limited Partnership, as assembled by an environmental group, misrepresent the Dunleavy administration’s role and stance on the Pebble Project,” according to the statement, sent by Jeff Turner, the governor’s spokesman. “The individuals in those videos embellished their relationships with state and federal officials at all levels."

“Any claims that Governor Dunleavy contacted White House administration officials on behalf of that company are false. Governor Dunleavy’s position has been unequivocal on this issue from his first day in office,” the statement said. "All resource development projects go through a rigorous environmental and permitting process by the EPA, Army Corps of Engineers and other federal agencies. The Pebble Limited Partnership has not submitted a project for the State of Alaska to review at this point. If a plan is submitted it will also undergo a vigorous review process.”

The recordings are not the first time Pebble’s connection with Dunleavy has been called into question.

Documents uncovered by CNN in December indicate the governor used ghostwritten language provided by Pebble in letters to the Corps and to potential investors in the mine. The letter to the Corps asked the agency to not extend a public comment period on the project.

The governor has not announced a position for or against the mine, though critics have argued his actions show that he supports it.

The tapes also show that Pebble believes that Republican Alaska Sens. Lisa Murkowski and Dan Sullivan were being political when they said in August that the Corps can’t permit the mine.

The two senators were wrong to say, based on a news story, that the Trump administration would delay the project, Collier said.

They’re now embarrassed and are “frozen,” Collier said. “So right now they’re just kind of sitting over in a corner and being quiet,” he said.

Murkowski in a statement Monday said Pebble has not met the requirements for a permit.

“Let me be clear: I did not misunderstand the Army Corps' recent announcement," she said in response to the videos. "I am not ‘embarrassed’ by my statement on it and I will not be ‘quiet in the corner.’ I am dead set on a high bar for large-scale resource development in the Bristol Bay watershed. The reality of this situation is the Pebble project has not met that bar and a permit cannot be issued to it.”

Collier said in the tapes that Sen. Dan Sullivan, up for reelection on Nov. 3, has gone quiet on Pebble and is hoping to “ride out the election."

Sen. Sullivan’s office said he continues to believe a permit cannot be issued.

“Senator Sullivan stands by that clear statement — any suggestion otherwise by Tom Collier or anyone else is either wishful thinking, a blatant mischaracterization, or an irresponsible ploy to secure funding,” his office said in a prepared statement.

In one video, Thiessen said Pebble is trying to work with Sullivan so the senator doesn’t say anything that could harm Pebble’s effort to receive a permit from the Corps.

“Sullivan’s going into his second (election) and so he’s got a battle on his hands, and we’re trying to work with him to make sure he doesn’t go and say something negative like – and he won’t say ‘Don’t build the mine,' but he might say, ‘Don’t issue the ROD until after the election,'” Thiessen said.

“Maybe in his imagination, but not in reality. This is yet another fabrication," his office said. “Senator Sullivan has been steadfast in keeping the permitting process an objective, rigorous, fair, science-based review – free of politics – and he has consistently said we should not trade one resource for another. We now have a final (environmental report) that shows Pebble will result in unavoidable significant degradation of the environment, and doesn’t meet the high standards we demand for all resource development projects in Alaska.”

The senator’s office also clarified what it called another “piece of misinformation” Collier said in the recordings that John Shively, chairman of Pebble’s board of directors, rents an apartment from Sullivan’s state director.

“John Shively does rent an apartment from Renee Reeve, however, he began renting that apartment well before Renee ever joined the senator’s staff,” Sullivan’s office said.

Also in the recordings, Collier, a former chief of staff to Interior Secretary Bruce Babbitt under former Democratic President Bill Clinton, said he was one of a number of organizers who raised money this summer in the successful effort to defeat incumbent Republican state legislators who put together majority organizations with Democrats in Juneau.

The change is favorable toward Pebble, he said.

“So I organized, I was one of a number of organizers of a business group, we got together, raised money, we put together a campaign and we defeated them all," Collier said in one of the recordings. "It’s gonna make for dramatic change in the Legislature here in Alaska and I was a leader in that effort for the Republican party, so my Democratic politics is really not a problem.”

Von Bismarck, with the environmental investigation group, said some of the recorded statements call into question testimony Collier made in 2019 to a House subcommittee on water resources and the environment.

“Pebble has no current plans, in this application or in any other way, for expansion,” Collier’s written testimony said.

Northern Dynasty and Pebble are seeking investors for the controversial project, after major mining companies have backed out over the years, amid strong opposition to the mine by conservation groups and Bristol Bay fishermen.

Thiessen said in one of the recordings that once the mine is in production, there would be no reason to halt its expansion. The deposit could last at least 180 years, he said.

“Once you have something like this in production why would you want to stop?” he said.

The United Tribes of Bristol Bay, representing 15 tribes that oppose the project, said it was “shocked” at the comments made.

They indicate government officials are playing politics with the projects, the group said.

"There must be a full investigation into this corrupt permitting process immediately,” said Alannah Hurley, executive director of the group.

This story was updated Tuesday to include additional comments from Sen. Dan Sullivan’s office and a comment from Gov. Mike Dunleavy’s office.