Traveling in Alaska this summer? Bring your sense of adventure, but also a backup plan and some patience 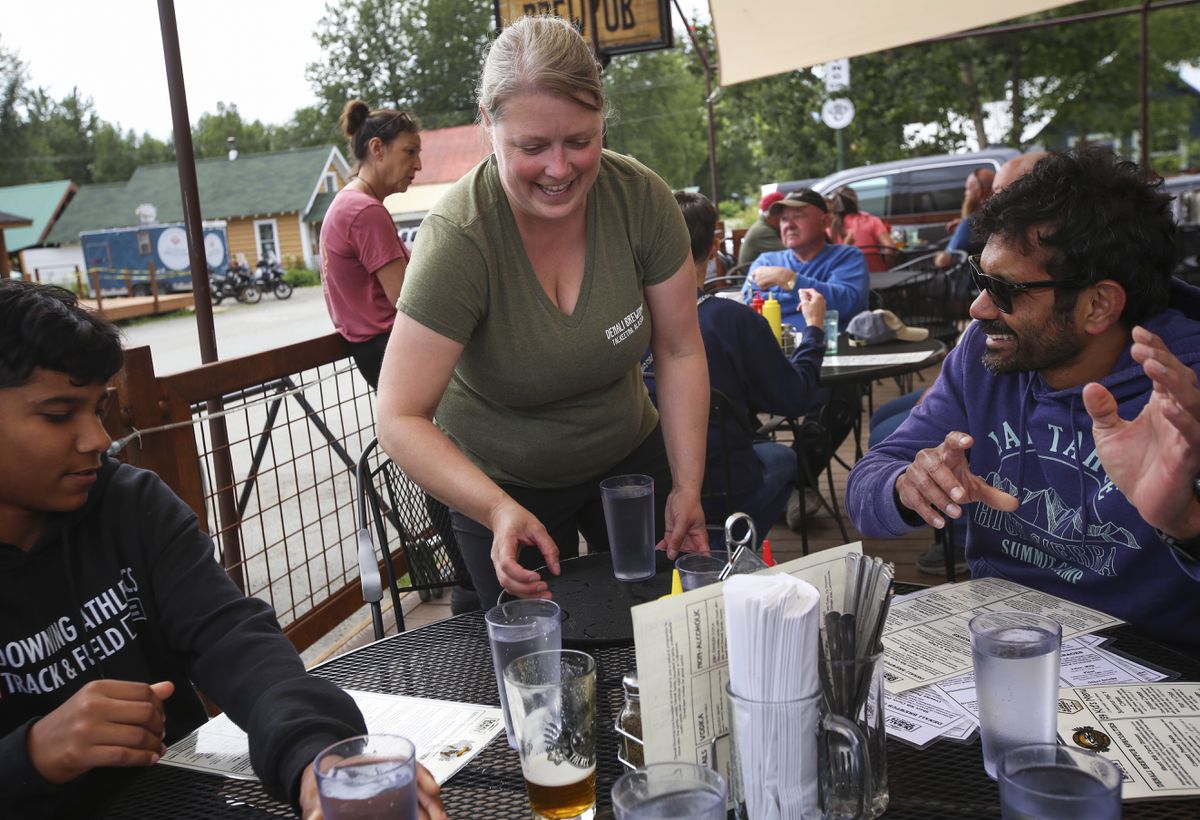 Heidi LaFleur, Denali Brewpub's HR director, brings glasses of water to a table of people at Denali Brewpub in Talkeetna on Wednesday, July 14, 2021. “I’ve been working the host stand quite a bit,”she said. “Our kitchen is short-handed, and our front of house is short-handed.” (Emily Mesner / ADN)

Heidi LaFleur, Denali Brewpub's HR director, brings glasses of water to a table of people at Denali Brewpub in Talkeetna on Wednesday, July 14, 2021. “I’ve been working the host stand quite a bit,”she said. “Our kitchen is short-handed, and our front of house is short-handed.” (Emily Mesner / ADN)

TALKEETNA — On a busy Wednesday afternoon, Heidi LaFleur waited tables and checked in diners at Denali Brewpub as the line grew in front of the host stand.

LaFleur is Denali Brewpub’s HR director, and usually works in an office. But due to staffing challenges, she said she has been filling in at the host stand.

The restaurant, in a popular Alaska tourism destination two hours north of Anchorage, usually has more than 60 employees in the summer. This year, LaFleur said, the number is around 40.

Alaska’s tourism industry is rebounding. But this summer, from Fairbanks to Homer, out-of-state visitors and traveling Alaskans can expect crowded restaurants, long lines and busy boardwalks.

Many hotels and lodges in the state’s tourism hotspots are booked months in advance, and some have had to cap their capacity. Rental cars are in short supply, too. Booking a vehicle on Turo, a car-sharing service, can cost hundreds. And going out to eat may require more planning than usual. Some restaurants have chosen to close an extra day a week or more to give staff a much-needed break.

Some independent travelers said they have made their trips to Alaska more enjoyable by renting Airbnbs with kitchen access or making a stop at one of the two Costcos in Anchorage. Others said having backup plans made their trips more manageable.

Many of the challenges are related to a shortage of workers. The president and CEO of the Alaska Travel Industry Association, Sarah Leonard, said hiring challenges in the tourism sector have been a hurdle statewide. Not only is Alaska competing with other travel destinations for workers; businesses are competing with each other for a limited pool of potential hires.

“We hope travelers to Alaska communities and local tourism businesses will recognize business owners and those employees who are working long shifts and performing extra duties — all in the effort to provide quality experiences to visitors returning to our state,” Leonard said in an email.

In Talkeetna, LaFleur said the brewpub doesn’t open until 4 p.m. on Mondays and Thursdays this summer; the place is typically open 11 hours a day, seven days a week.

Businesses in Talkeetna and other tourist-heavy towns typically hire many J-1 visa workers — foreign college students who travel to Alaska to help during the state’s busy tourism months.

In Fairbanks, Jay Ramras, owner of Pike’s Waterfront Lodge and Pike’s Landing, said staffing is down around 40% at the restaurant and 20% at the hotel. As a result, the lodge has had to cap occupancy at 80%.

“When we have tried to reach 100% occupancy, it just wreaked havoc with our workforce,” Ramras said.

The restaurant is closed on Sundays due to short staffing.

Most guests get it, he said, but some travelers still have high expectations.

“Because it looks normal, they think that things are normal, and we’re doing a Houdini trick every day trying to present that facade,” Ramras said.

Friends Melissa Fowler and Nancy Gassman of Florida ate lunch at the Denali Brewpub at 11 a.m. to beat the afternoon lunch rush.

Fowler and Gassman have had to adjust throughout their trip. A restaurant they were hoping to try in Anchorage was closed the two days they were there, and another eatery they had been excited to try was out of many ingredients, Gassman said, including salmon.

On the Homer Spit, another top Alaska tourist destination, visitor volume has been heavy, said Brad Anderson with the Homer Chamber of Commerce. Some businesses are reporting the highest number of visitors in May and June they’ve ever had, he said.

Many of restaurants in Homer are choosing to close one or two days a week, Anderson said.

“Our restaurant folks are dealing with a staffing shortage, and costs of supplies and availability of supplies added on top of that,” he said.

Housekeeping is another sector being hit hard. Many lodges and hotels are booked at capacity through August, Anderson said, with few openings in September.

“I’ve actually had members call out to the Chamber that said, ‘Please, don’t refer anybody to us because people just get upset when they call and we can’t accommodate them,’ ” Anderson said.

Kat Sorensen with the Seward Chamber of Commerce said many restaurants in town have chosen to close one or two extra days a week, just to give their staffs a break.

The staffing shortage is a combination of fewer J-1 workers and the U.S.-Canada border closure, she said. In any non-pandemic year, she said a handful of independent travelers would drive up from the Lower 48 to live and work in Seward for the summer, sometimes “a dozen or two.”

“That’s a lot of shifts that aren’t being covered,” she said.

Colorado couples Kunal and Sucheta Bendkhale and Sai Amancharla and Shabri Tomar were traveling together across Alaska, from Homer to Denali. On Wednesday, they were grabbing lunch in Talkeetna.

The group has had to be flexible. They chose to book Airbnbs so they could have a kitchen and not be entirely dependent on restaurants and their schedules.

They bought halibut from fishermen in Seward for homemade quesadillas. They became familiar with an Anchorage Costco, too.

While they booked two months in advance for their trip, they still dealt with long wait times. In Anchorage, it took over two hours to get a pizza

“I think that’s been the secret, is that we booked two months ago,” Amancharla added. “That’s the same with car rentals, Airbnbs.”

While some businesses are scrambling and busy, others, like the Talkeetna Roadhouse, are still as quiet as they were during the height of the pandemic.

Trisha Costello, owner of the Roadhouse, had to lay off 21 full-time staff in March of 2020 — not including the J-1 workers who typically come to Alaska in non-pandemic years for summer work.

It’s hard to find reliable help, she said. It’s just her and some part-time help she’s brought on.

“Right now, I’m not even good enough for my team because I’m so frickin’ tired,” Costello said. “That’s how it feels.”

Costello herself wakes up early on the weekends, around 3:30 a.m., to make pastries and other treats. At the same time, she’s making breakfast for the limited number of guests staying at the Roadhouse.

“You never forget how to make a cinnamon roll, that’s for sure,” Costello said.

In the past, the Roadhouse was partly known for its shoulder-to-shoulder breakfasts, served family-style. It has been closed for family-style dine-in since last March. Costello is still selling some of the Roadhouse’s iconic baked goods through a window Saturday and Sunday mornings, from 9 a.m. to 2 p.m.

It’s a tough decision to stay closed for dine-in, Costello said. And for her, it’s not just about a shortage of workers, she said. Vaccination rates are too low in the area, she said, so she’s keeping the dining room closed for now.

She reiterates the message for customers on a sign out front: “Not sure what the magic number is, but over 75% vaccination/immunity rate needs to be a reality before small closed indoor spaces are truly safe.”

Guests at the Roadhouse, a bunkhouse that’s been around since the 1918 influenza pandemic, are limited to a handful of rooms. All guests are assigned to their own separate bathroom, unlike before, when they were shared.

She had to put curtains up in the cafe to give her guests some privacy, where they can eat and spend time in the common area. People would bang on the windows nonstop and peer through them, she said.

“It felt like ‘Night of the Walking Dead,’ ” she said.

Still, she’s booked around four to five weeks out right now, and even has people scheduled for 2022.