Independent travelers have arrived in Alaska, and they’re a needed boost for many businesses 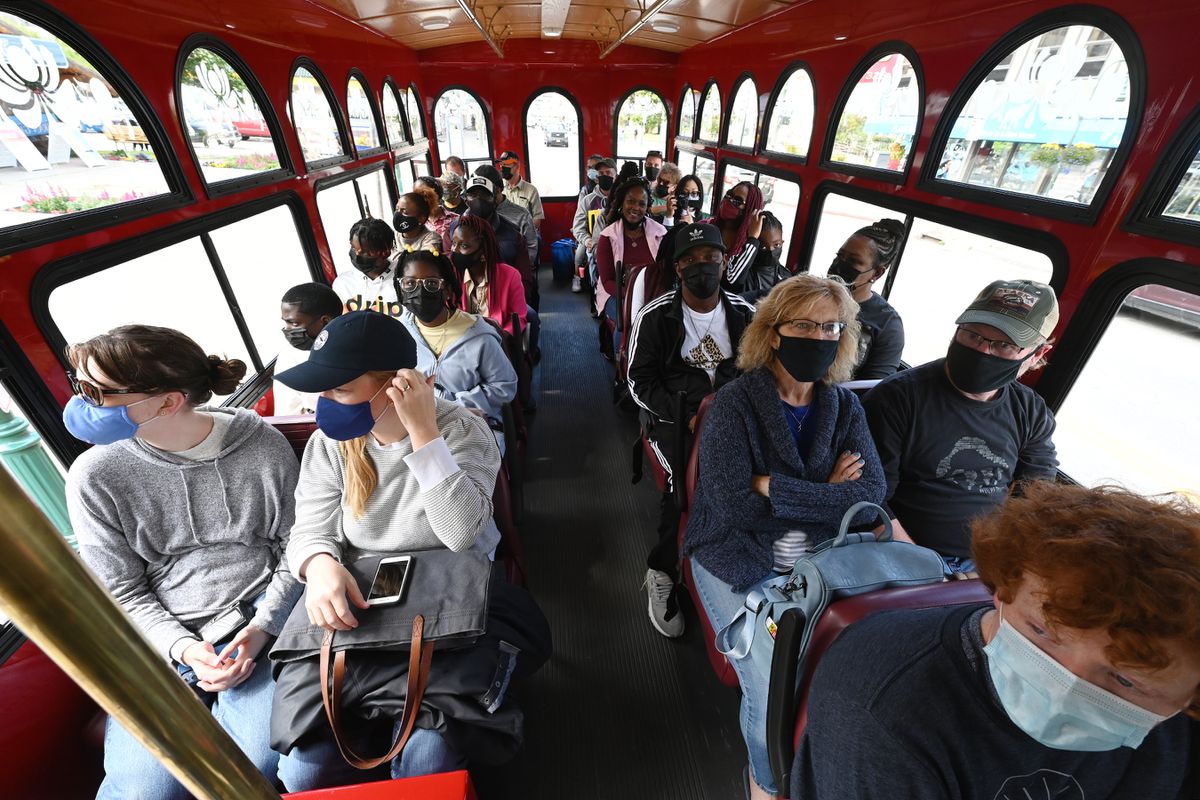 A trolley full of tourists prepare to depart from Fourth Avenue in downtown with Anchorage Trolley Tours on Thursday, June 17, 2021. (Bill Roth / ADN)

A trolley full of tourists prepare to depart from Fourth Avenue in downtown with Anchorage Trolley Tours on Thursday, June 17, 2021. (Bill Roth / ADN)

Tourism operators are reporting that Lower 48 visitors are flying to Alaska in unexpected numbers this summer.

Considered independent tourists because they’re not part of a cruise ship package tour, they can’t fully replace the cruise tourists who arrived by the thousands pre-pandemic.

But independent tourists are helping offset losses. They’re filling up Southcentral Alaska’s roadways and hotels, and putting a strain on services from rental cars to restaurants. Worker shortages are also adding to the delays, as activity surges and jobless Alaskans only slowly rejoin the workforce.

The seaside communities of Homer and Seward on the Kenai Peninsula are especially busy, tourism representatives say.

Many tourism operators in Anchorage and at the doorstep to Denali National Park and Preserve also say they’re enjoying a surprisingly good season.

“There are times I feel like half of the Lower 48 is in Homer,” said Tom Soderholm with Smokey Bay Air, which offers bear viewing trips. “It’s pretty powerful.”

People have been locked up at home so long they’re willing to spend more for a once-in-a-lifetime excursion, he said.

[To lure employees during the worker shortage, some Alaska companies are offering perks or more pay. Others are scaling back until they can restaff.]

Bookings are “incredibly strong,” he said. More people in their 30s and 40s are signing up for the relatively high-end bear-viewing trips, a switch from the older clientele he usually saw before the pandemic.

“Alaska has always been on their list and a lot of people figure this is the year to do it,” he said.

Jon Faulkner, owner of the 145-room Land’s End Resort in Homer, said the hotel is booked through October. But a lack of available workers forced the hotel’s restaurant to recently close.

Homer saw numbers of visitors in May that it usually doesn’t see until June, Faulkner said.

“It’s over the top,” Faulkner said.

In Seward, the streets are so busy that May felt like July, usually Seward’s busiest month for tourism, said Kat Sorensen, marketing director for the Seward Chamber of Commerce and Visitor Center.

“Every weekend feels like the Fourth of July right now,” Sorensen said, referring to the date for the town’s famous Mount Marathon race. The event will be held July 7 this year to reduce visitor numbers as a COVID-19 precaution.

Sorensen said many lodges are booked through midsummer, and camp sites are hard to find. Restaurants can back up two hours, though a lack of available workers has added to delays, she said.

Tim Dillon, head of the Kenai Peninsula Economic Development District, drove from the Kenai area to Seward for a business trip this week, he said Tuesday.

Unable to find a hotel room in Seward, he’s cabin-hopping for a couple of nights, he said. He’s seeing a mix of out-of-staters and Alaskans filling up businesses and events in communities across the Peninsula.

“It was amazing this past weekend to see the number of people in restaurants and hotels,” he said.

Dillon said business is improving so fast in the city of Kenai that the local city council there recently voted to halt a $200,000 stimulus program that would have supported hospitality businesses using COVID-19 relief funds, as the Peninsula Clarion reported.

“The last thing I want is for someone to go without, but they also need to be able to help themselves,” he said. “With the traffic coming through the Peninsula now, we have people.”

When they arrived in state, the rental car he’d booked with a company wasn’t available, he said.

[Curious Alaska: How is the national shortage of car rentals affecting Alaska?]

[‘It’s never been this crazy’: With rental cars scarce in Alaska, a car sharing service takes off]

But they found an old van on Turo, the online car sharing company, and made do, he said.

The scenery he saw on his “bucket list” trip to Alaska — canceled last year because of the pandemic — made up for the challenges. Killer and humpback whales surfaced during a marine excursion in Seward, and the family got close-up views of North America’s largest mountain during a flightseeing trip in Denali.

“We anticipated Alaska would be one of the prettiest spots on Earth, and it did not disappoint,” he said.

Visitors want to get outdoors

Jack Bonney, with Visit Anchorage, said that tourism research anticipated that travelers this summer were eager to get outdoors, and Alaska was high on their list, he said.

That appears to be bearing out so far, he said.

But it’s uncertain whether the high rate of tourism will sustain itself. Before the pandemic, June through August were typically the state’s busiest months for tourism and the time when most cruise ships arrived.

Visit Anchorage has heavily marketed Alaska to other markets, highlighting the city’s urban amenities and easy access to wilderness, he said.

The numbers of independent travelers won’t come close to the 1.3 million cruise ship tourists who arrived in Alaska in 2019, before the pandemic halted years of record tourism growth in Alaska, industry representatives say.

But those independent tourists, generally younger and more adventurous than cruise visitors, usually stay longer in Alaska since days on the cruise doesn’t reduce their vacation time. They spend more and appear to be booking their trips on short notice, compared to cruise guests who book well in advance.

“We will have a better summer than we anticipated, but we won’t get back to the trajectory we were on in 2019,” she said.

Ted Stevens Anchorage International Airport in May saw about three-quarters of the incoming traffic for the same period in 2019, airport officials said.

Tourism representatives said most travelers in Alaska are U.S. tourists arriving by air. The European Union, a larger international market for Alaska, lifted restrictions on U.S. travelers only on Friday, but the U.S. hasn’t returned the favor. The Canadian border remains closed to nonessential travel.

“We are seeing quite an uptick in folks traveling north (to Alaska),” Thompson said.

Bookings look strong through the summer, he said. Plane occupancy is beating expectations and will likely exceed 80% of 2019 levels.

In Anchorage, data for May shows that hotels were filled almost to May 2019 levels, Bonney with Visit Anchorage said.

[The economy isn’t going back to February 2020. Fundamental shifts have occurred.]

The Hotel Captain Cook in downtown Anchorage is unexpectedly at about 90% of its 2019 occupancy for this time of year, said Raquel Edelen, the hotel’s vice president of operations.

Corporate travel is seeing an earlier-than-anticipated recovery, she said, adding to the hotel’s leisure travelers.

She said many restaurants and businesses are busy with tourists, she said.

“Everyone is slammed and it’s nothing that anyone expected,” she said.

Some large cruise ships are set to return to Alaska in late July for the first time since 2019, but only to Southeast Alaska, and only in limited numbers.

Without the cruise ship business in Southcentral Alaska — where hundreds of thousands of guests would typically disembark, often bound for Denali — some companies will not do as well as others, tourism representatives said.

Premier Alaska Tours in Anchorage usually gets much of its business by shuttling cruise tourists in buses.

It plans to operate only about 50 of its vehicles this summer. Another 100 or so vehicles will sit out the summer again in a lot, said Josh Howes, president of Premier.

“It’s not as good as we’d like, but it’s quite a bit better than last year,” he said. “It’s only the second-worst year we’ve ever had.”

Sales will still be down by more than half compared to 2019, said John White, owner of Nenana Raft Adventures near the entrance to Denali.

“The independents are picking up the slack big time and they are here in robust numbers,” he said during a break between river trips last week. “They are ziplining, they are rafting, they are doing ATV tours.”

It almost feels like a normal tourism year in Talkeetna, the jumping-off point for Denali flightseeing tours and expeditions, said Regan Thrall with the town’s Chamber of Commerce.

People are finding inexpensive flights to Anchorage and Fairbanks and making their way to the park, she said. Because of the rental car shortage, some park visitors are even arriving in U-Hauls.

“If you’ve been cooped up in your home all year, you want to be outside,” she said. “And if you’re still remotely nervous about COVID, it’s relatively safe to be with people outside.”