The oil industry appears interested in ANWR, but how much money will it generate? 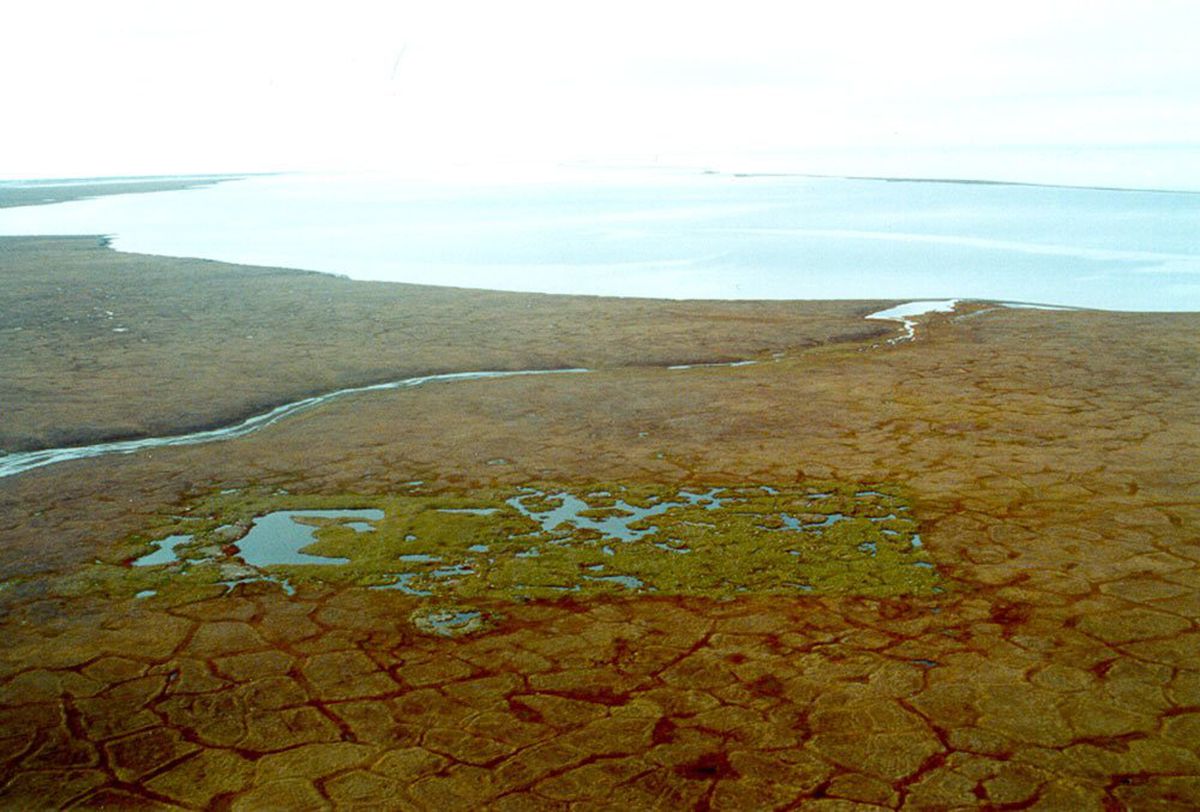 The site of the only oil well – completed in the mid-1980s – ever drilled on the Arctic National Wildlife Refuge. The polygonal patterns in the undisturbed tundra are signs of ice wedges, which in the disturbed area have melted, leading to the pooled water. (U.S. Fish and Wildlife Services via The New York Times)

The site of the only oil well – completed in the mid-1980s – ever drilled on the Arctic National Wildlife Refuge. The polygonal patterns in the undisturbed tundra are signs of ice wedges, which in the disturbed area have melted, leading to the pooled water. (U.S. Fish and Wildlife Services via The New York Times)

If Congress opens the Arctic National Wildlife Refuge coastal plain to leasing by oil companies, as appears likely, even a relatively small discovery will be economically important in Alaska, drilling advocates say.

And if a giant field awaits in the northeast Alaska refuge, something akin to the Prudhoe Bay oil field to the west? That could mean a decades-long boon for the economy, they say.

But the arguments, and those of drilling opponents who say unlocking the 19-million-acre refuge won't interest companies, are often based on years-old data.

Opening the refuge has long been a goal of Republican lawmakers. But this latest measure from Sen. Lisa Murkowski, R-Alaska, has hurtled onto Congress' tax-overhaul bill. There has been little new analysis on factors such as potential jobs or economically recoverable oil, opponents say.

[Lone exploratory well in ANWR has kept its secret for decades]

Estimates of oil in the 1.5-million-acre section of coastal plain where development might occur are based on a mid-1980s, two-dimensional seismic survey. It has widely spaced survey lines that could miss traps big enough to hold economically viable fields, said David Houseknecht, the U.S. Geological Survey's lead geologist for oil and gas resources in Alaska.

"I've been getting calls from all parts of world, literally," he said Friday.

In the past six months, as it became clear congressional Republicans might open ANWR, close to 10 companies have called him seeking that old seismic data. They want the report to weigh a potential bid if the refuge is opened.

He said that's a significant number: "There aren't that many companies in the world with the resources to go to Alaska and explore."

The USGS plans to reprocess that old data using modern technology. In a year, the agency expects to issue the first update of the refuge's oil estimates since 1998.

But the USGS can't release the seismic reports to those companies or the public until two years after a lease sale in ANWR. The data is held by only 11 companies, survivors of the original consortium that collected it, including major Alaska oil producers, ExxonMobil, ConocoPhillips and BP, he said.

Some of those companies with access to the confidential data are also taking a new look at it, but others aren't. "And some don't tell me," he said.

He did so in a letter urging the nonpartisan Congressional Budget Office to update its analysis of the revenue that two ANWR lease sales would generate, arguing the estimate was far too high.

The CBO has said the sales would generate $2 billion for the U.S. and Alaska to split. (Under Murkowski's legislation, the governments evenly divide lease income and production royalties.)

Oil companies in the NPR-A sale bid 12 cents for each acre available, seeking just seven of 900 tracts in the record offering, according to the letter, signed by Grijalva and two other Democratic House members. At that price, a sale of every acre that might be available in the coastal plain would raise only $180,000.

Drilling opponents assert ANWR is too remote and expensive to explore, and too fraught with the possibility of legal challenges from conservation groups. They say cheaper, more accessible opportunities exist in Lower 48 shale fields.

Estimates of jobs and revenue from ANWR drilling are based on "outdated information and rosy assumptions" of possible oil reserves and other factors, said an economic report by Virginia-based Key-Log Economics, paid for by The Wilderness Society.

"Oil under the coastal plain are unproven reserves, meaning there is no guarantee that oil is there and could one day be produced and sold," it says.

The cost of building pipelines and roads in the Arctic is just one factor that will curb industry enthusiasm, said Nicole Whittington-Evans, the wilderness group's Alaska director.

"It would be an enormous investment," she said.

In 2005, a USGS economic review of the estimated oil within ANWR and adjacent state waters reported that a mean of 9.5 billion barrels could be economically extracted, using 2003 prices at $45 a barrel. That oil price is similar to current North Slope prices, adjusting for inflation.

That's a huge number, drilling supporters say. Prudhoe Bay's original production estimate was 9.6 billion barrels. Since launching in 1977, the field has blown past that estimate and remains one of the nation's largest producers.

Instead, royalties are critical, she said. If Murkowski's measure is approved, and all the economic oil is produced, the 16.67 percent royalty rate would bring in about $100 billion for the state and federal government to split, at today's prices.

"That's important because around here we usually take from someone else's piece of the pie instead of growing the pie," she said of Congress. "This is a real opportunity for us to grow that pie."

Past studies haves shown production for generations, such as at Prudhoe Bay, could generate hundreds of thousands of direct and indirect jobs in Alaska and elsewhere in the U.S., she said.

The USGS in 1998 reported that nearly 80 percent of oil in ANWR is thought to exist in the western coastal plain, in "several accumulations rather than a single large accumulation."

Mark Myers, former USGS director under President George W. Bush, said no one knows how much oil ANWR might produce.

But even the agency's lower-end estimates of possible oil recovery are significant, he said.

"You're looking at production scenarios of hundreds of thousands of barrels of oil per day," he said.

Companies will look at ANWR "hard," Myers said. "An opportunity of this scale doesn't come along very often."

Development in the refuge would stoke other exploration in the region, keeping the state's oil industry alive.