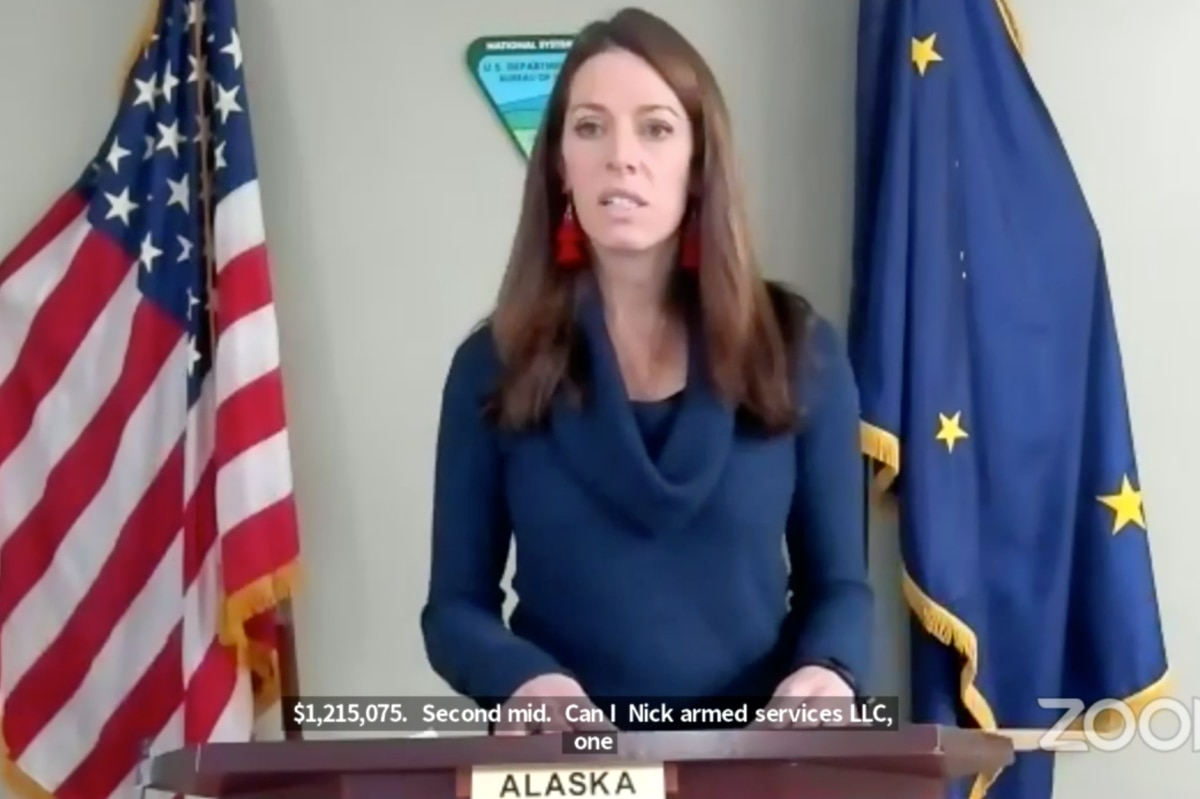 The federal government’s first-ever oil and gas lease sale in the Arctic National Wildlife Refuge raised $14.4 million in bids, with the vast majority of winning bids submitted by a development corporation owned by the state of Alaska.

But the sale was a bad start to the revenues the federal government had hoped to gain from the refuge. It had estimated the lease sales would bring in $1.8 billion over a decade, to be split between the Alaska and federal governments. The money raised on Wednesday fell far short.

The government sold only 11 tracts of 22 it was offering in the refuge’s coastal plain, or about 550,000 acres out of about 1 million offered. Most of the tracts totaled about 50,000 acres, and went for a bit over $1 million.

None of Alaska’s three top oil producers — ConocoPhillips, ExxonMobil and Hilcorp, the owners of the large Prudhoe Bay oil field west of the refuge — submitted bids.

Larry Persily, a former federal gas line official for Alaska, called the sale “ho-hum.” He said the bidders are all small entities that would need the backing of major partners to help finance development.

“There is nothing that changes my opinion about the dismal outlook of oil coming out of ANWR with these bids,” Persily said.

AIDEA bid on all 11 tracts that received bids. It had agreed to place minimum bids on tracts — $25 per acre plus other fees — as a backstop in case no one else came forward in the sale. The agency could potentially sublet the leases to oil companies in the future.

Alan Weitzner, AIDEA’s executive director, said in a statement, “by acquiring these tracts, Alaska preserves the right to responsibly develop its natural resources.”

Weitzner did not respond to an interview request Wednesday.

Congress in 2017 approved opening the coastal plain of the refuge to oil and gas drilling, following decades of efforts by Alaska leaders to allow leasing there in order to boost the state’s economic future. Conservation and some Indigenous groups prize the region as an unspoiled wilderness and want to keep it that way to slow global warming and protect wildlife.

Little is known about the oil prospects in the refuge, although oil has seeped to the surface in some locations along the coast, tantalizing Alaska leaders and many residents with the possibility of a big discovery that could support future generations of Alaskans if oil is ever produced.

Congress in the mid-1980s allowed only limited exploration in the area, including a seismic survey using now-outdated methods that could have missed large accumulations of oil.

Natalie Lowman, a spokeswoman with ConocoPhillips, said the company’s decision not to bid was based on numerous factors. They include the “availability of seismic data, the potential for commercial hydrocarbon accumulations, strategic fit, and the ability to compete against other exploration opportunities in our portfolio worldwide,” she said in a statement.

The company is currently focused on its plans in other Alaska fields far west of the refuge, where the potential is “tremendous” she said.

Hilcorp and ExxonMobil did not immediately return requests for comment on Wednesday.

The tracts that received bids in the lease sale are situated largely along the Arctic Ocean coast and the western part of the refuge, closer to ExxonMobil’s Point Thomson oil field across the refuge boundary.

David Wall, chief executive of 88 Energy, said in an interview on Wednesday from Australia that the company bid on a tract at the very western edge of the ANWR coastal plain.

Total costs to acquire the lease will be about $1 million, he said.

The slender parcel was the smallest offered in the sale, at about 23,000 acres. It’s next to other state-owned acreage the company has already leased, outside the refuge.

Wall said the company saw the tract as a “soft entry” into the refuge, since it’s also located next to the Point Thompson field and the existing infrastructure, and far away from the heart of the coastal plain.

The company will be respectful of Native culture and the environment, he said.

”We don’t want to do anything to upset anyone,” he said. “But we want to make money for ourselves, and the state and its people.”

Conservation groups immediately condemned the sale, and criticized it for not raising as much money as Alaska’s leaders had hoped.

“This lease sale was an epic failure for the Trump administration and the Alaska congressional delegation,” said Adam Kolton, executive director of the Alaska Wilderness League, in a statement. “After years of promising a revenue and jobs bonanza they ended up throwing a party for themselves, with the state being one of the only bidders. We have long known that the American people don’t want drilling in the Arctic Refuge, the Gwich’in people don’t want it, and now we know the oil industry doesn’t want it either.”

Even after the sale, there are big hurdles for anyone pursuing oil development in the refuge. Oil prices are relatively low. Many major banks have said they won’t finance new Arctic oil and gas projects. President-elect Joe Biden has said he opposes drilling. And several environmental groups, tribal entities and 15 states have filed lawsuits to halt the oil and gas program in the refuge.

Still, the Alaska Oil and Gas Association, a trade group for the industry, called the lease sale “historic.”

“While the results may not have been as robust as we might have expected, industry still supports future access to this area,” said Kara Moriarty, the group’s president.

Moriarty said the sale reflects “brutal economic realities” the industry faces along with regulatory uncertainty. But with the global need for oil expected to continue for decades, the refuge has a role to play in U.S. oil production, she said.

Oil production there will create important jobs and provide energy security for the U.S., the delegation said.

“Today is a great day and the result of many Alaskans’ tireless efforts over the course of decades,” said Sen. Lisa Murkowski. “The first lease sale in the non-wilderness (coastal) area did not occur under ideal conditions, but it will benefit Alaskans both in the short-term and well into the future.”

Taxpayers for Common Sense, a nonprofit that describes itself as a “budget watchdog,” had estimated the lease sales would generate less than $100 million. They called the sale results a disappointment for U.S. taxpayers.

“Holding this lease sale at the 11th hour of this administration, during the pandemic when oil demand is low and prices in flux, all but doomed this already questionable sale from the start,” said Autumn Hanna with Taxpayers for Common Sense.

On Tuesday, Sharon Gleason, a federal district court judge in Anchorage, ruled against the National Audubon Society and other conservation groups and is allowing the Trump administration to issue the leases, a step expected in the coming days or weeks.

But Gleason did not rule in the broader questions in the case, whether the Trump administration violated environmental laws as it created the program. That decision is expected to come later.

On Wednesday before and during the lease sale, protesters gathered outside the building in downtown Anchorage housing the Bureau of Land Management, the agency that held the lease sale.

“I grew up steeped in this controversy,” said one of the protesters, Margi Dashevsky, a volunteer with Defend the Sacred Alaska. “Today is one day in a longer story, and the larger resistance to Arctic oil extraction is a story of diversifying Alaska’s economy and moving beyond fossil fuels.”

U.S. Democratic leaders have long opposed development in the refuge.

With Democrats set to control both the executive and legislative branches in Washington, D.C., following runoff elections for Georgia Senate seats on Tuesday, they will have opportunities to stop development in ANWR, said Persily, the former federal gas line official.

If the leases are issued before Trump leaves office, Biden and Congress could decide to buy back the leases, Persily said.

A Biden administration could also stall development there, whether the leases are issued or not, experts have said.

But Persily said the limited bidding spells trouble for oil development in the refuge.

“The lack of interest in a lease sale should indicate to Alaskans there is no oil from AWNR on its way,” Persily said.

Correction: An earlier version of this story incorrectly spelled the name of Margi Dashevsky, a volunteer with Defend the Sacred Alaska.