With oil drilling in ANWR advancing and a possible end to Pebble mine, what could change for Alaska under Biden? 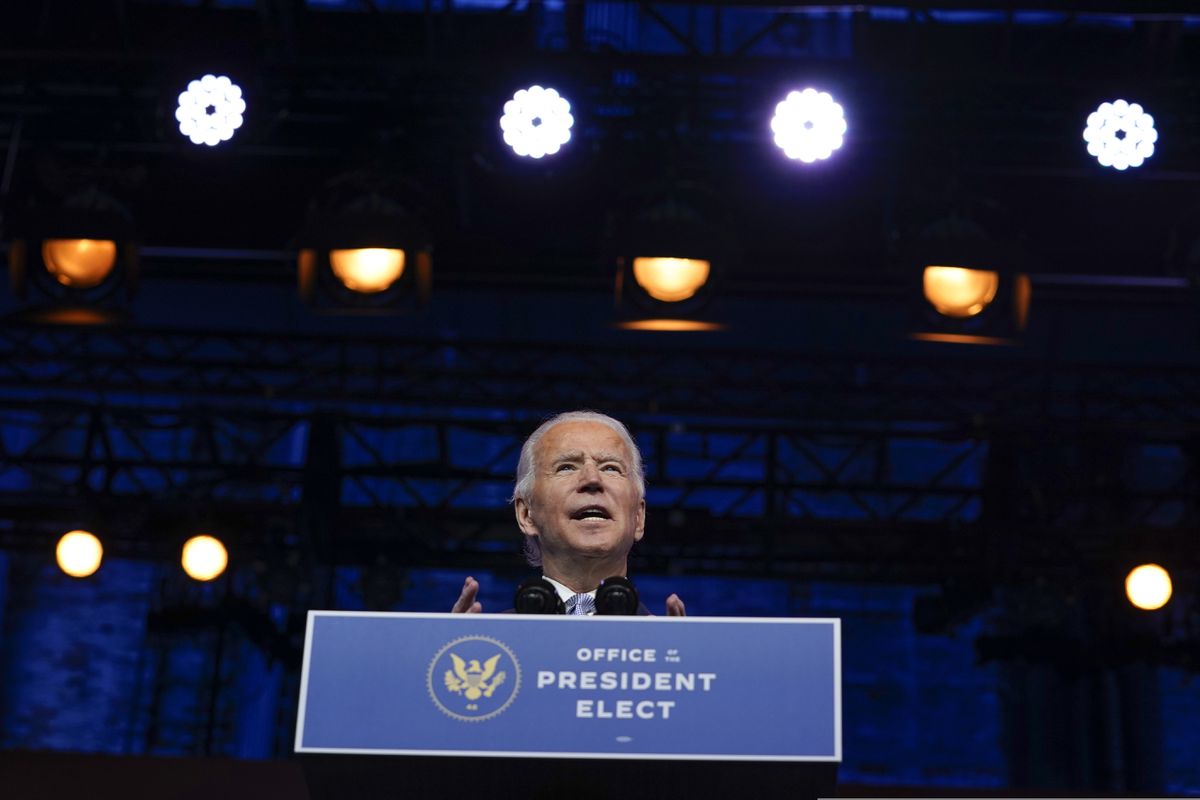 On his first day in office, President-elect Joe Biden plans to take unprecedented steps to rein in carbon emissions and oil drilling on federal lands as he tries to build what he calls a “clean energy economy.” In Alaska, that would mark a dramatic reversal from President Donald Trump’s aggressive approach toward developing resources.

Many Alaskans say they’re wary Biden will roll back projects that advanced under Trump, including drilling in the Arctic National Wildlife Refuge, which Biden has said he “totally” opposes. The Trump administration is hustling to push ahead what it can in its final weeks, and in the past week scheduled an oil lease sale in the refuge on Jan. 6.

U.S. Rep. Don Young said in a statement that Republicans must retain control of the Senate — up for grabs in Georgia runoff elections in January — as a “last line of defense against those who desire to lock Alaska up forever.”

Biden’s supporters acknowledge he might delay some projects. But they say he could open new job opportunities in Alaska in renewable energy, tourism and construction.

“It will definitely be different than the Trump administration,” said David Ramseur, a lead volunteer of Alaskans for Biden-Harris who served as chief of staff to former Alaska Democratic Sen. Mark Begich.

Ramseur said Biden is a moderate, with job creation and a better economy among his top goals. Biden understands that oil and gas production in Alaska and elsewhere are critical to the nation’s energy future, Ramseur said.

Biden’s relationship with the late Alaska Sen. Ted Stevens also matters, Ramseur said. Biden spoke at Stevens’ funeral in Anchorage in 2010 and often dined with him.

“By virtue of his soft spot for Alaska, Alaska is well positioned to benefit under Biden,” Ramseur said.

In its remaining weeks, the Trump administration is moving quickly on several of its Alaska priorities. But it’s uncertain how much can be finalized, said Pat Pourchot, the Interior Department’s former top Alaska official under Obama.

Multiple agencies are trying to complete projects, but not everything can get through the system, something that he witnessed under Obama, he said.

“It’s like a big snake with a big lump in the snake,” Pourchot said.

Biden has set first-day executive action goals after his Jan. 20 inauguration that include permanently protecting the Arctic National Wildlife Refuge and stopping new oil and gas permitting on federal lands, according to his campaign website.

Young said he thinks Biden’s “biggest target” in Alaska is halting future drilling in the refuge.

Republicans in Congress in 2017, at the urging of Alaska’s congressional delegation, approved a lease sale in the refuge by the end of 2021.

The Trump administration is moving quickly on the sale scheduled for Jan. 6.

A lease sale will make it harder for Biden to stop exploration because he can’t use an executive action to take back what the government issued, said Aaron Weiss, deputy director of the Center for Western Priorities in Denver, a conservation group.

But Biden can decline to issue permits to drill, halting the project under his term, Weiss said.

Joe Balash, Trump’s former assistant Interior secretary of land and minerals management, said Biden will need to properly explain why the permits are being denied. Balash was a key player in advancing the plan that will allow drilling in the refuge.

Oil companies that win leases but don’t get the chance to drill could potentially sue for damages, Balash said.

Court actions will likely play a role in a lease sale, observers said. Conservation groups, tribes and 15 states have brought lawsuits to halt the auctions.

Alaska’s delegation said it will continue its fight on the issue. Sens. Lisa Murkowski and Dan Sullivan said they’ll work with Biden, a former senator with whom they have relationships, to keep drilling in the refuge on the table and advance other Alaska projects.

Murkowski said Alaska’s oil-based economy will face new pressures, but the delegation has shown it can work across the aisle.

The Obama-Biden administration tried unsuccessfully in 2015 to permanently protect the Arctic refuge. But they didn’t get the required approval from Congress, led by Republicans at the time.

“If they try to do what they did previously, I will fight ‘em like hell,” Sullivan said in a call with reporters.

Drilling in the petroleum reserve could still advance

In addition to a refuge lease sale, the Center for Western Priorities has identified multiple other projects that could advance under Trump as he exits.

For example, the Trump administration could expand oil drilling opportunities in the National Petroleum Reserve-Alaska.

The oil potential in the Arctic refuge is an unknown. But oil companies in recent years have made large discoveries in and near the petroleum reserve, the site of ConocoPhillips’ new large Willow prospect.

Kara Moriarty, head of the Alaska Oil and Gas Association, said the industry is concerned that the Biden campaign’s call for no new permitting could even stop the Willow project, which the Trump administration in October approved for development.

The federal government still needs to issue numerous permits before drilling can begin, she said.

Ramseur, with the Alaska Biden-Harris campaign, said he believes Biden will allow development to continue in the petroleum reserve, though with more precautions than under Trump.

Steve Cohn, a former Bureau of Land Management deputy director in Alaska who now heads The Nature Conservancy’s chapter in the state, also said he thinks Willow is likely to advance under a Biden presidency. The process is well underway, he said.

In a separate effort, the Trump administration still has time to expand the acreage that’s available for drilling in the petroleum reserve, including around the sensitive Teshekpuk Lake area, the Center for Western Priorities said.

If the Trump administration finalizes that plan, Cohn believes that Biden would move to reverse it, restoring protections set under Obama in 2013 that still allowed oil and gas leasing on millions of acres in the reserve.

Trump doesn’t have much time left to finalize the new reserve plan, Cohn said. Doing things too quickly could set the project up for a loss in court, if some requirements are not properly addressed.

Cohn believes the Trump administration has hurt its efforts to complete its goals in Alaska, in part because Trump never finalized the appointment of a BLM director, part of his administration’s pattern of allowing acting directors to run departments.

Biden could end Pebble for good

Critics hope Biden will deal the controversial Pebble mine a final blow.

The Trump administration last month rejected a permit that would have set the stage for construction of the copper and gold mine in Southwest Alaska. But developer Pebble Limited Partnership plans to challenge the decision.

Biden, who has said “Bristol Bay is no place for a mine,” could possibly end the proposed copper and gold project in the Bristol Bay region for good, observers say.

If Pebble wins an appeal and receives a permit from the U.S. Army Corps of Engineers, Biden could call on his Environmental Protection Agency to veto the permit.

The Obama-Biden administration pursued an EPA veto to stop Pebble in 2014. Trump later reversed that effort.

Murkowski and Sullivan’s opposition to Pebble could also help stop it, observers say.

Murkowski recently provided language for an appropriations bill that she said could be an early step toward taking the Pebble mineral deposit, located on state land, off the table for development.

The language calls for funding to value the land, to potentially compensate the state of Alaska if the mineral deposit is one day removed from future development — possibly through a federal land exchange, Murkowski said in an interview.

Cohn, with The Nature Conservancy, said that effort could help give Biden a unique opportunity to stop Pebble forever.

The Trump administration recently opened more than half the Tongass National Forest to logging. It also fought to cut a road through the Izembek National Wildlife Refuge, to connect the village of King Cove to what proponents say is a lifesaving airport in Cold Bay.

The new exemption in the Tongass Forest to the 2001 Roadless Rule doesn’t mean logging roads can immediately be built there, said Eric Fjelstad, an attorney with Perkins Coie focused on environmental and resource issues in Alaska.

A federal management plan must be updated before that can happen, he said.

It’s uncertain if that will move forward under Biden, Fjelstad said.

“The roadless rule exemption only opens the door for management plans to contemplate roads,” Fjelstad said.

As for the King Cove road in Southwest Alaska, two U.S. District Court judges have tossed the Trump administration’s plans for a land swap to build the road, though the issue is on appeal.

[The Trump administration repealed the ‘Roadless Rule’ for Alaska’s Tongass forest. What’s next?]

Young said he’ll fight any efforts to reverse course on the King Cove road, the Tongass and other Alaska projects that Trump worked to advance.

“I will be doing all that I can — on both the Natural Resources Committee and on the House Floor — to stop rollbacks of the progress we’ve made,” the congressman said.

Ramseur said Alaska will play a leading role in Biden’s efforts to combat climate change, with the state’s unique Arctic location giving it an important political role globally, he said.

Biden is also looking at investments to upgrade the nation’s infrastructure, spending that could benefit Alaska and help the president-elect build support across the aisle, Ramseur said.

In Alaska, that could mean money to upgrade rural water and wastewater systems, and to improve roads and bridges, he said.

New job opportunities could include upgrades to power systems throughout Alaska, making them more efficient, she said. Roads, trails and amenities in parks and other federal lands could be improved.

Increased attention to those areas could support the state’s tourism industry.

“Let’s make Alaska a world-class tourism destination,” she said. “It’s a very bright future if you hook the train onto the engine.”

Andy Mack, the Alaska commissioner of natural resources under Gov. Bill Walker, said Alaskans must stay vigilant if they want projects like Arctic refuge drilling to move ahead under Biden.

“The big picture is we’ve done this many times before,” he said. “We’ve gone from a Republican to Democrat and Democrat to Republican.”