Trump says journalists 'have their reasons' to play down terrorism threat 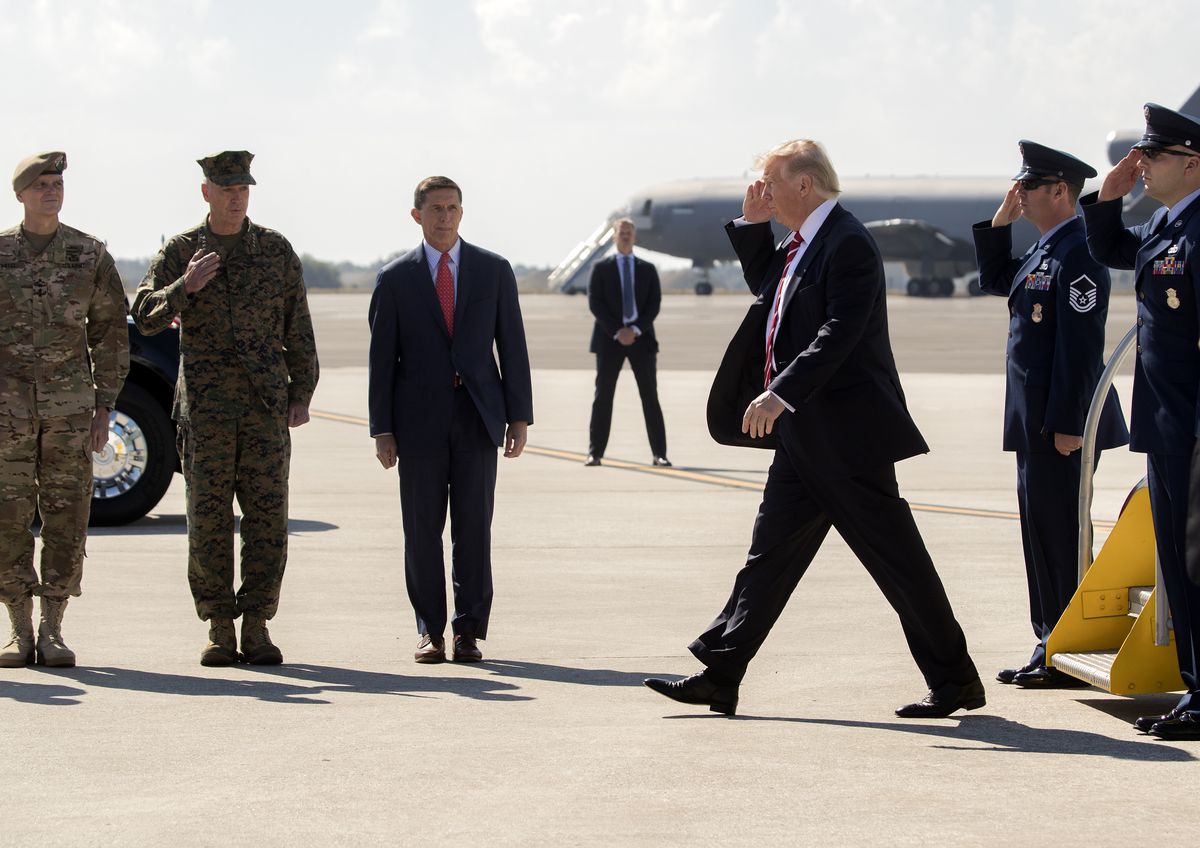 WASHINGTON — President Donald Trump asserted Monday that the news media was playing down the terrorist threat posed by the Islamic State, telling U.S. military personnel that journalists were reluctant to report on the militant group's attacks in Europe and "have their reasons" for failing to cover them.

Trump initially did not provide examples of a news media conspiracy to underplay terrorist attacks, and his comments appeared to ignore the vast amount of reporting on violence committed by the Islamic State and its supporters in the Middle East, Europe and the United States. Later Monday, the White House released a list of what it said were 78 attacks from September 2014 to December that were carried out or inspired by the Islamic State. The White House said "most have not received the media attention they deserved."

The list included the major attacks in Paris; Brussels; San Bernardino, California; and Orlando, Florida, that dominated the news for weeks. Other attacks overseas, lesser known to Americans, received extensive local coverage, like a shooting in Zvornik, Bosnia, in April 2015 in which one police officer was killed and two others were wounded. But in many of these attacks, it was not clear what role, if any, the Islamic State played.

The president's speech was the second time in recent weeks that he has used an appearance before national security personnel — usually apolitical settings in which the focus is on strategy and sacrifice — to discredit journalists and exult in his election victory.

"Radical Islamic terrorists are determined to strike our homeland, as they did on 9/11, as they did from Boston to Orlando to San Bernardino and all across Europe," Trump said at MacDill Air Force Base in Tampa, Florida, home to the military's Central Command and Special Operations Command. "All over Europe it's happening. It's gotten to a point where it's not even being reported, and in many cases, the very, very dishonest press doesn't want to report it."

"They have their reasons," Trump added, "and you understand that."

The theory that the news media is trying to whitewash terrorist attacks to protect Islam or Muslim migrants has been pushed by several right-wing news organizations, including the conspiracy-filled site Infowars, whose founder, Alex Jones, is an ally of Trump's.

The president's comments Monday were reminiscent of his claim during a visit last month to the headquarters of the Central Intelligence Agency in Langley, Virginia, that the news media had fabricated his feud with the intelligence community. Those remarks came only days after he likened U.S. intelligence officials to Nazis, after several weeks in which he had denigrated their work.

Aboard Air Force One on Monday, Sean Spicer, White House press secretary, told reporters returning to Washington with Trump that the president had been referring in Tampa to "several instances" in which the news media had not devoted sufficient attention to terrorism.

Trump, Spicer said, believes journalists pay more attention to public protests than they do to terrorist attacks or plots.

"He felt members of the media don't always cover some of those events to the extent that other events might get covered," Spicer said. "Protests will get blown out of the water, and yet an attack or a foiled attack doesn't necessarily get the same coverage."

During his 12-minute speech Monday, Trump promised to make "a historic financial investment in the armed forces," in an effort to maintain peace in "our troubled, troubled times." He also vowed to give the military the tools necessary to prevail against the Islamic State and thwart its attempts to strike America.

He also used the time — as he did at the CIA two weeks earlier — to exult in his election victory, citing the large share of military votes he drew as proof of service members' loyalty to him.

"We had a wonderful election, didn't we?" Trump said. "I saw those numbers, and you liked me, and I liked you."

While exit polls showed that about 60 percent of military personnel supported Trump in the November election, the armed forces are not a partisan institution and their members swear to obey their commander-in-chief, regardless of party.

Earlier Monday, at a luncheon with enlisted soldiers, sailors, airmen and Marines, Trump went around his table asking who would remain in the military, and told them their experience would improve during his presidency.

"Come on; you have to stay," he said to one luncheon companion. "You'll like it better with me."

The speech underscored the drivers of his inward-looking national security vision: an almost exclusive focus on the threat of the Islamic State; a skeptical view of multilateral alliances including NATO; and an "America First" rationale for hard-line policies like his travel ban, which he is defending from legal challenges.

"We need strong programs so that people that love us and want to love our country and will end up loving our country are allowed in, not people that want to destroy us and destroy our country," Trump said, an apparent reference to his executive order on Jan. 27 suspending the United States' refugee program, blocking Syrian refugees indefinitely and barring any entrants from seven predominantly Muslim countries.

On NATO, Trump, who has said in the past that the alliance is "obsolete," tempered his message, arguing that he was focused on ensuring that it is well funded.

Trump said he would ensure that military personnel had the tools they needed to do their jobs, asserting that "we've been depleted" and vowing that this would not continue during his presidency.

The president also asserted that he had saved more than $700 million on the F-35 fighter jet program "when I got involved in the negotiation," arguing that defense contractors including Lockheed Martin and Boeing had "cut their prices" at his insistence.

Trump was apparently referring to a decision by Lockheed on Friday to cut the price on a new contract for 90 of the radar-evading fighters by an additional $7.4 million per jet. Officials with the military and with Lockheed said the president's intervention had helped speed negotiations and had contributed to the savings. But some savings will come from increased manufacturing efficiencies as the production rate grows, they added, making it difficult to quantify how much can be attributed to Trump's prodding.