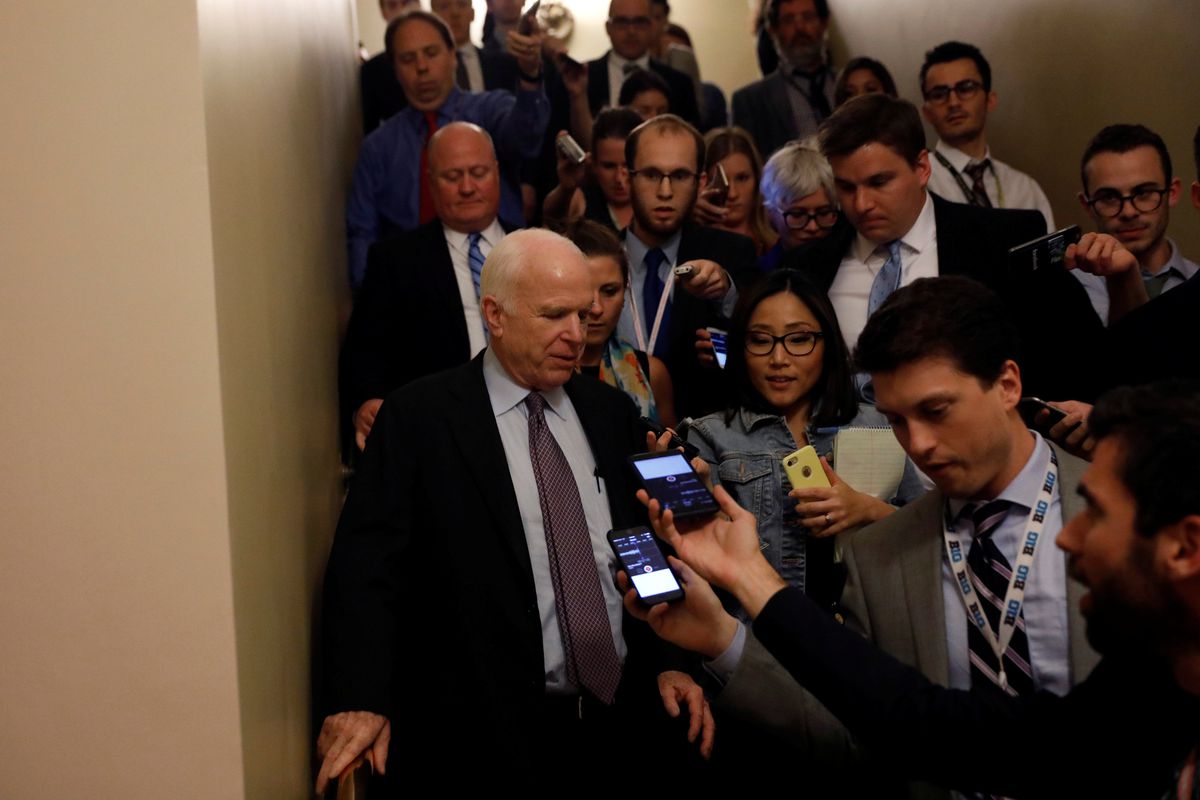 WASHINGTON — President Donald Trump and congressional Republicans suffered a dramatic failure early Friday in their bid to advance a scaled-back plan to overhaul the Affordable Care Act, raising the prospect of emergency bipartisan talks to shore up the existing health-care system.

But in the wake of the vote, it remained unclear how swiftly lawmakers would move to shore up the federal health-care exchange, and whether the White House would join in that effort.

Equally uncertain was whether Republicans and Democrats, who hold starkly contrasting views on health care, would be willing or able to put aside their differences to collaborate at a moment of sharp polarization.

Republicans faced a moment of reckoning after failing to fulfill their signature promise of the last seven years. The defeat threatened to cause deeper divisions in a party that has been unable to show a major legislative accomplishment this year despite controlling Congress and the White House.

The individual insurance market has deteriorated in recent months as Republicans have struggled to craft a replacement for the 2010 law, and early Friday morning President Trump reiterated his intention to see the system collapse.

In a dramatic showdown on the Senate floor, Sen. John McCain, R-Ariz., stunned his colleagues by joining Sens. Lisa Murkowski of Alaska and Susan Collins of Maine to reject the latest attempt to rewrite the ACA. The Arizona Republican, diagnosed with brain cancer last week, returned to Washington on Tuesday and delivered a stirring address calling for a bipartisan approach to overhauling the 2010 health-care law, while criticizing the process that produced the current legislation.

It was a speech that laid the groundwork for Friday's dramatic vote.

The GOP bill was voted down 51 to 49 — all 48 members of the Democratic caucus joined the three Republicans to block the legislation. McCain, scarred from recent surgery to remove a blood clot that unearthed his cancer, rebuffed a last-minute appeal by Vice President Mike Pence during a direct exchange on the Senate floor.

McCain emerged from his talks with Pence at 1:29 a.m., approached the Senate clerk and gave a thumbs down – casting the third GOP "no" vote. His decision sparked stunned gasps and some applause.

Senate Majority Leader Mitch McConnell, R-Ky., and his leadership deputies stood watching, grim-faced and despondent. McConnell had hoped to approve the new, narrower rewrite of the health-care law at some point Friday, after facing dozens of amendments from Democrats. But the GOP defections left McConnell without a clear path forward.

"Our only regret is that we didn't achieve what we hoped to accomplish," McConnell said after the failed vote. Red-faced and sounding dejected, he pulled the entire legislation from consideration, set up votes on nominations that will begin Monday and gave no indication of what might happen next regarding health care.

In a statement after the vote, McCain said Congress "must now return to the correct way of legislating and send the bill back to committee, hold hearings, receive input from both sides of the aisle, heed the recommendations of the nation's governors, and produce a bill that finally delivers affordable health care for the American people."

Shortly after the vote, Trump responded with a tweet: "3 Republicans and 48 Democrats let the American people down. As I said from the beginning, let ObamaCare implode, then deal. Watch!"

3 Republicans and 48 Democrats let the American people down. As I said from the beginning, let ObamaCare implode, then deal. Watch!

But senators in both parties said they are ready to quickly launch work on a new plan.

"Maybe this had to happen to actually begin to have a conversation," said Sen. Bill Cassidy , R-La., who had tried and failed to broker a previous bipartisan compromise.

Sen. Lamar Alexander, R-Tenn., who chairs the Senate Health, Education, Labor and Pensions (HELP) Committee that under normal circumstances would play a central role in crafting a new health-care bill, said Friday's setback "leaves an urgent problem that I am committed to addressing."

Democrats said they hoped any new attempt to shore up the health-care system would begin in the Senate HELP Committee, considered a bipartisan bright spot in the Senate, given that it wrote a bipartisan education reform bill that passed last year.

The federal government is slated to spend roughly $7 billion this year, and $10 billion in 2018, to help pay for consumers out-of-pocket health costs, but administration officials have not indicated if they will supply the funds after the end of this month.

"The governors have to speak out on this; they have been speaking out, and we need to listen," added Carper, a former governor. "The insurance companies themselves, too."

The federal government is slated to spend roughly $7 billion this year, and $10 billion in 2018, to help pay for consumers out-of-pocket health costs, but administration officials have not indicated if they will supply the funds after the end of this month.

"The governors have to speak out on this; they have been speaking out, and we need to listen," added Carper, a former governor. "The insurance companies themselves, too."

Sen. Amy Klobuchar, D-Minn., said that fresh bipartisan talks also should include plans to reduce the cost of prescription drugs.

"That is a steep lift, with the way pharma influences legislation in this town, but maybe this is the opening that we need," she said.

The drawn-out health care debate on Capitol Hill has left lawmakers and administration officials with very little time to reassure jittery insurers that the markets created by the ACA will be stable enough for them to offer plans at a reasonable rates. Under guidelines issued by the Health and Human Services Department, companies must set their final rates by Aug. 16 and states must submit the rates they've approved to federal officials by Sept. 27.

On July 19, a bipartisan group of insurance commissioners asked Senate leaders "to take immediate action" to commit tens of billions of dollars to shore up the market. These steps included fully funding the cost-sharing reduction (CSR) payments to help lower-income Americans afford coverage, which have been challenged by House Republicans in federal court, though 2019, and $15 billion a year during the same period to offset the costs of consumers with expensive medical conditions.

Several Republicans, stunned by the abrupt end to their years-long fight, lodged veiled criticism of Collins, McCain and Murkowski.

"I would never criticize anybody's votes, but I'm very disappointed," said Sen. David Perdue, R-Ga., a close Trump ally. "I think the self-interest is still alive in the Senate. I think it's time to put that aside and put the national interests first."

Perdue said he was encouraged to hear Senate Minority Leader Charles Schumer, D-N.Y., say early Friday that the ACA is in need of serious reforms, comments that compelled him to begin talking to Democrats about potential compromises.

But other Republicans signaled they will oppose bipartisan talks.

"I don't think the Democrats have any interest in doing anything productive" on health care, said Sen. Ted Cruz, R-Texas.

"Republican senators are going to go home. They're going to hear from their constituents, and I don't expect the response to be muted," Cruz added.

The bill's fate began to collapse Thursday as McCain sought an ironclad guarantee from House Speaker Paul Ryan, R-Wis., that, if the Senate approved this latest proposal, the House would not move to quickly approve the bill in its current form and instead engage in a broad House-Senate negotiation for a wider rollback of the law. Ryan issued a statement intended to assuage the concerns of McCain and two others, Sens. Lindsey Graham, R-S.C., and Ron Johnson, R-Wis., but the 2008 GOP presidential nominee deemed the speaker's statement as insufficient.

The standoff between the two chambers highlighted the extent to which Republicans have still not reached a consensus on how to rewrite President Barack Obama's 2010 health-care law, and the degree to which Republicans are repeating many of the same backroom maneuvers that Democrats used seven years ago to approve the ACA.

McConnell's draft rattled moderates such as Collins and Murkowski, as well as Republicans who wanted a more robust uprooting of the existing law.

"I'm not going to tell people back in South Carolina that this product actually replaces Obamacare, because it does not; it is a fraud," Graham said at a Thursday evening news conference with McCain and Johnson at his side.

And while GOP senators insisted that the bill they were considering would not make it into law, if enacted it would have made sweeping changes to health coverage as well as medical treatment in the United States.

The measure also would have eliminated funding for preventive health care provided under the 2010 law and prohibited Medicaid beneficiaries from being reimbursed for Planned Parenthood services for one year. Instead, the bill aimed to steer funding to community health centers. It would have ended a 2.3 percent tax on medical device manufacturers for three years.

And it would have empowered federal officials under an existing waiver program to give states wide latitude in how they allocate their Medicaid funding, potentially pooling that money with other programs such as one that helps lower-income Americans buy private insurance. It also would have increased the limit on contributions to tax-exempt health savings accounts for three years.

Interior Secretary Ryan Zinke had called Sullivan and Murkowski separately on Wednesday to warn them that the administration may change its position on several issues, according to individuals briefed on the conversations, given Murkowski's vote against proceeding with health care legislation this week.

Implementing their pledge to repeal what they derisively call Obamacare and create a new health-care law has proved embarrassingly difficult for Republicans. First, the House took an extra six weeks to pass its version of the bill in early May. Most Republicans agreed that the measure was flawed – Trump later called it "mean" for how it would deny insurance to 23 million people – and they hoped that the Senate would craft a better bill.

But McConnell's closed-door negotiations ended in gridlock, leaving him to pull together what was dubbed a "skinny repeal" of the ACA, just to keep alive the possibility of negotiations with the House to come up with a different plan later this summer.

"This is clearly a disappointing moment," McConnell said.

Paul Kane contributed to this report.