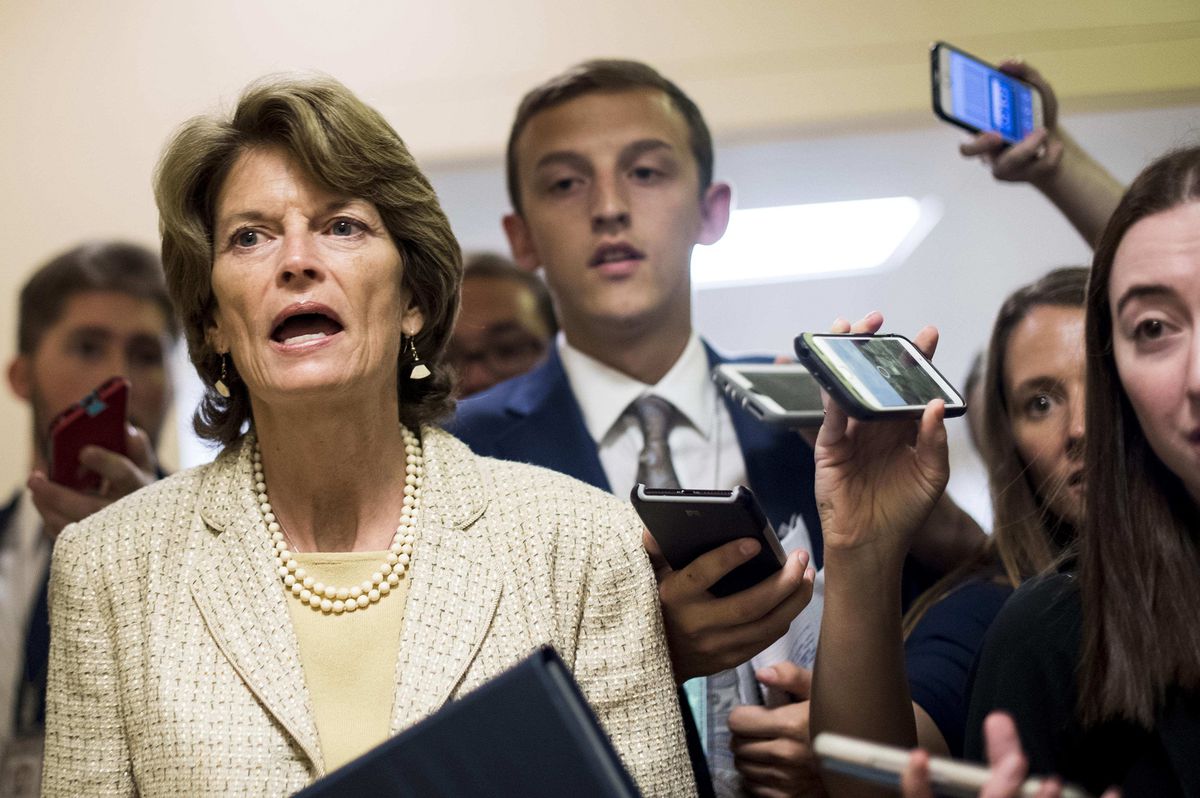 Sen. Lisa Murkowski answers questions from journalists while rushing to votes concerning the Republican version of the health care bill on Capitol Hill on Thursday. (Melina Mara / The Washington Post)

Sen. Lisa Murkowski answers questions from journalists while rushing to votes concerning the Republican version of the health care bill on Capitol Hill on Thursday. (Melina Mara / The Washington Post)

WASHINGTON — Alaska Sen. Lisa Murkowski confirmed Thursday that she received a call from Interior Secretary Ryan Zinke, at the behest of the president, to pressure her about her vote on Senate health care legislation.

But she says she's not worried.

In an interview Thursday, Murkowski, a Republican, did not want to divulge the exact content of phone calls with both President Donald Trump (before the vote) and Zinke (after the vote), but was clear in saying the intent was to pressure her for her vote and she didn't feel pressured in the slightest.

Murkowski said she spoke to Trump on Tuesday, before a vote to proceed with debate on the House-passed health care bill and a slew of amendments.

"And you know, it was a difficult conversation. But I did not indicate where I was going one way or another, because at that point I had not yet determined," Murkowski said.

On Wednesday, after the vote, Murkowski heard from Zinke, who she said "shared with me that the president was not pleased." Zinke made it clear that Trump had asked him to pass along the message, Murkowski said.

Senator @lisamurkowski of the Great State of Alaska really let the Republicans, and our country, down yesterday. Too bad!

Unlike some of the other senators who have received a strong arm from Trump over their reservations on Senate health care legislation, Murkowski isn't up for re-election until 2022.

But for Murkowski, who heads the Energy and Natural Resources Committee and the appropriations subcommittee that oversees the Interior Department, having the interior secretary call about health care was a pointed move on the part of the president.

"Here's what we're dealing with. The president wants to get a health care bill. He's gonna make calls — that's understood. He's been doing it, and that's kind of his job. I don't have a hardship with that, I don't have heartburn with that at all," Murkowski said.

Asked if she thought some of her key Interior priorities — building a road from King Cove through the Izembek Wildlife Refuge, oil drilling in the Arctic National Wildlife Refuge and more — were at risk, Murkowski said no. She said she felt she still shared priorities with the Trump administration.

She said she and the president agree that the "status quo isn't acceptable" on health care.

"Where we disagreed was simply on the process, and whether or not the Senate was ready to go to the floor to take up the bill," Murkowski said.

"I certainly hope that those in the administration will continue to work with all of us — all of the Alaska delegation — on priorities that are not only important to Alaska, they're important to the country," she said.

In the end, she said, "the secretary was asked to deliver a message. He did so."

Alaska's senators weren't the only ones hearing the Interior Department was reaching out this week.

Curtis Thayer, president and chief executive of the Alaska State Chamber of Commerce, said he got a call from someone in Washington, D.C., on Tuesday afternoon that alerted him he might be hearing from Zinke.

"I was just told that if I received a call from an unknown number I should take it, because most likely it was Secretary Zinke's office," Thayer said Thursday.

In D.C., it was about 6 p.m. Thayer declined to say who called him but he checked with U.S. Rep. Don Young's office, and was told Young had gotten a call from Zinke the same as Murkowski and Sullivan. He said he wasn't told what Zinke wanted to tell him and he didn't find out.

But, "apparently votes on different issues have consequences," he said. "I don't know what the consequences are." In his view, he said, the health care debate is separate from resource development and the needs of Alaska.

Young's spokesperson Matt Shuckerow said Thursday the congressman had been "in direct communication with senior administration officials on the issues of health care and resource development as recently as yesterday," but could not clarify who, exactly.

In a statement, Young appeared to imply that some Alaska priorities could be on the line as a result of health care negotiations, but he was not concerned.

"As for discussions on Alaska-specific priorities, I've known from the beginning what's at risk. However, I've never been one to panic just because someone says 'fire.' My job is to serve the Alaskan people and work with the administration to ensure it gets done. That's what I'm going to do," Young said.

Young also said that he continues to believe that the Affordable Care Act, or "Obamacare," "is a broken law that continues to fail Alaskan families, workers and small businesses. My position has been and continues to be that it must be repealed and reworked," he said.