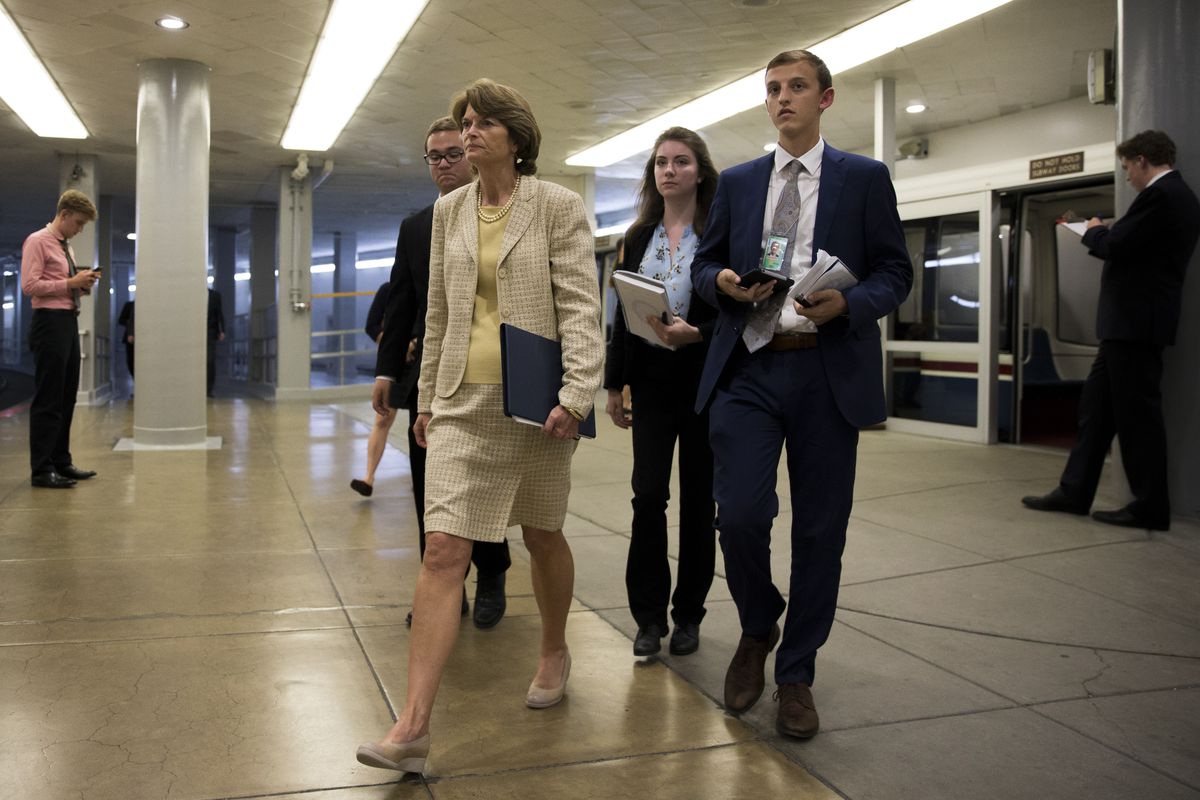 Sen. Lisa Murkowski, R-Alaska, on Capitol Hill in Washington, July 26, 2017. Murkowski was one of seven Republicans who on Wednesday rejected a measure repealing major parts of the Affordable Care Act without replacement; the 45-55 defeat signaled that a “clean repeal” bill cannot get through Congress. (Tom Brenner/The New York Times)

Sen. Lisa Murkowski, R-Alaska, on Capitol Hill in Washington, July 26, 2017. Murkowski was one of seven Republicans who on Wednesday rejected a measure repealing major parts of the Affordable Care Act without replacement; the 45-55 defeat signaled that a “clean repeal” bill cannot get through Congress. (Tom Brenner/The New York Times)

This story has been updated. Click here for the latest version. The original story, published Wednesday evening, is below.

Early Wednesday, Trump took to Twitter to express displeasure with Murkowski's vote. By that afternoon, each of Alaska's two Republican senators had received a phone call from Interior Secretary Ryan Zinke letting them know the vote had put Alaska's future with the administration in jeopardy.

The response follows Trump's no-holds-barred style of governing, even when it comes to his own party. It is his first strike of retaliation against Murkowski, however, despite her tendency to stray from the party line and the president's priorities.

"I'm not going to go into the details, but I fear that the strong economic growth, pro-energy, pro-mining, pro-jobs and personnel from Alaska who are part of those policies are going to stop," Sullivan said.

"I tried to push back on behalf of all Alaskans. … We're facing some difficult times and there's a lot of enthusiasm for the policies that Secretary Zinke and the president have been talking about with regard to our economy. But the message was pretty clear," Sullivan said. The Interior secretary also contacted Murkowski, he said.

Murkowski was not available for comment. Spokespeople from the White House and the Interior Department did not respond to inquiries.

Sullivan said the Interior secretary was clear that his message was in response to the no vote Murkowski cast Tuesday on the motion to proceed with debate on the House-passed health care legislation.

Efforts and issues on the line include nominations of Alaskans to Interior posts, an effort to build a road out of King Cove through the Izembek National Wildlife Refuge, and future opportunities to drill in the Arctic National Wildlife Refuge and expand drilling in the National Petroleum Reserve-Alaska, among other regulatory issues that are a priority for Murkowski and Sullivan.

Sullivan said he had discussed the calls with Murkowski, and his concerns remain.

Murkowski and Maine Republican Sen. Susan Collins voted at odds with their fellow Republicans on Tuesday to begin floor debate on legislation to repeal and replace the Affordable Care Act. The vote was on the House-passed health care bill, rather than the Senate legislation that has faltered in fits and starts in recent weeks.

Murkowski said she felt the effort was rushed and did not adhere to an open and transparent legislative process.

Much remains unknown — how far the White House will go to punish or pressure Murkowski, what exactly the impact will be for Alaska, and just how it will play out.

Murkowski chairs the Senate Energy and Natural Resources Committee and has used the position to drive home Alaska priorities, particularly with Interior nominees. She oversees the confirmation process for the Interior Department.

On Wednesday, a committee hearing on nominations to the Interior and Energy departments was postponed indefinitely. A reason was not posted.

For her part, Murkowski said Tuesday that she was not deeply concerned about pushback from Alaska Republicans about her vote.

"I base my votes on what I believe is in Alaska's best interest," she said. "So I know that there are those who wish that I would be more in line with following the party platform, but I don't think it should come as any surprise that there have been occasions that I have not followed the lead of the party."

Trump has shown a willingness to go after members of his own party when they go against his preferred agenda — an unusual presidential tactic.

Trump ultimately suspended the advertising campaign after complaints from Republican senators, but kept up pressure on Heller, even saying at a White House meeting with Republicans, "Look, he wants to remain a senator, doesn't he?"

Heller is facing a tough race in 2018; Nevada is a swing state.

Murkowski, on the other hand, is not. She won her re-election handily in 2016, and does not face re-election until 2022. So a threat to "primary" her over the vote means little at this moment.

But Trump made it clear he was unhappy with Murkowski's vote Wednesday morning, taking to Twitter to air his unhappiness.

"Senator @lisamurkowski of the Great State of Alaska really let the Republicans, and our country, down yesterday. Too bad!" Trump wrote.

When asked about the tweet in a hallway interview Wednesday morning, Murkowski told an MSNBC reporter that future elections did not weigh into her decision on health care.

Murkowski on Trump’s Twitter attack: “How about just doing a little bit of governing around here? That’s what I’m here for.” @NBCNightlyNews pic.twitter.com/77mM3Urtuq

Murkowski has been at odds with Trump at times — occasionally refuting his more controversial statements. She took a stronger approach toward the end of the presidential campaign, saying she could not support his candidacy and would write in a vote for someone else.

But Trump hasn't struck back at Murkowski in the past. She has been invited to the White House numerous times, and as a potential "swing vote" has repeatedly been seated next to or near the president during negotiations and meetings.

It is not clear whether the president offered Murkowski any deal on health care — or any threats prior to her vote.

Trump has not tweeted about Murkowski in the past, and rarely about Alaska. He retweeted a "Fox & Friends" story earlier this month about a missile defense test off the coast of Alaska.

And in 2014, he tweeted about Russian President Vladimir Putin seizing Alaska, and a follow-up saying Putin wouldn't want the state, because the Environmental Protection Agency would make it impossible for him to drill for oil.