Republicans are still hunting for ways to pay for tax cuts 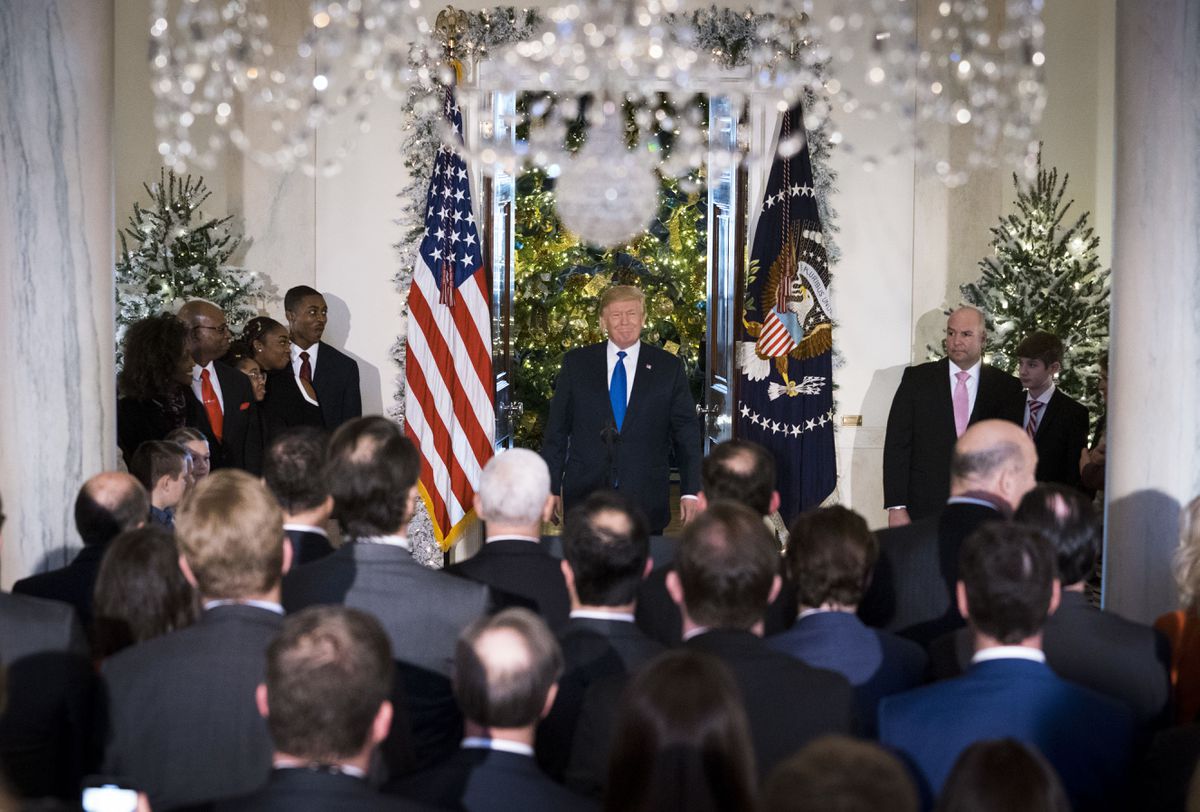 President Donald Trump enters to speak about tax reform at the White House, in Washington, Dec. 13, 2017. Trump hosted several families at the event who the administration says would benefit from the proposed tax cuts. (Doug Mills/The New York Times)

President Donald Trump enters to speak about tax reform at the White House, in Washington, Dec. 13, 2017. Trump hosted several families at the event who the administration says would benefit from the proposed tax cuts. (Doug Mills/The New York Times)

WASHINGTON — House and Senate Republicans faced a new round of uncertainty Thursday about the fate of their $1.5 trillion tax bill with the possible defection of a Republican senator, Marco Rubio of Florida, amid continuing questions about how the bill will be paid for and how much of the benefits will flow to low- and middle-income people versus corporations.

Republicans, who reached agreement Wednesday on a merged version of the House and Senate tax plans, expect to unveil the final bill Friday and vote on the legislation early next week so that it can be sent to President Donald Trump before Christmas.

But those plans were thrown into some disarray Thursday when Rubio said that he would vote no on the bill unless it included a more generous version of the child tax credit, which he and another Republican senator, Mike Lee of Utah, have been pushing for to benefit lower-income individuals.

"I think my requests have been pretty reasonable and consistent and direct," Rubio said. A spokesman for Lee said he was undecided on the bill.

Rubio and Lee have been pressing Republican leaders to expand the child tax credit to make it more generous for low-income families. That change would further drive up the cost of the tax bill, which can add no more than $1.5 trillion to federal deficits over a decade if the bill is to pass without Democratic support.

In a tweet Thursday afternoon, Rubio needled Republican leadership, saying "Tax negotiators didn't have much trouble finding a way to lower" the top tax bracket and to have the corporate tax cut take effect a year early.

Republican negotiators responsible for merging the two bills have made a host of changes to assuage the concerns of businesses and some fellow lawmakers. Those tweaks, which include eliminating the corporate alternative minimum tax and dropping the top individual tax rate to 37 percent from the current rate of 39.6 percent, are expected to drive up the cost of the bill and will need to be paid for to stay in the $1.5 trillion box.

"We're literally trying to squeeze about $2 trillion in tax reform into a $1.5 trillion box and that's been a problem," Sen. Ron Johnson, R-Wis., said this week. Johnson held out on supporting the initial version of the Senate tax bill until it gave more generous tax breaks to so-called pass-through businesses, whose owners pay taxes on profits through the individual code.

Republican lawmakers have so far said little about how the final version of the legislation will be paid for, other than agreeing to nudge the corporate tax rate to 21 percent from the 20 percent in both the Senate and House bills. (The present tax rate is 35 percent.) One idea under consideration, according to Sen. Thom Tillis, R-N.C., is raising the tax rate on profits that companies have parked overseas.

But on Thursday, Republicans were running out of time to make changes and showed little patience for acceding to new demands. Rep. Kevin Brady, R-Texas, the chairman of the Ways and Means Committee, cast doubt on further altering the child tax credit.

Sen. Rob Portman, R-Ohio, a member of the House-Senate committee that negotiated the final tax bill, said the Senate had already battled the House to preserve the Senate's more generous version of the child tax credit, which doubled to $2,000, with $1,100 of that amount refundable and able to be claimed by families who face no federal income tax liability.

"We've already won," Portman said. "We should take our victory."

At the White House, Trump predicted that Rubio would "be there" on the tax bill, and the White House press secretary, Sarah Huckabee Sanders, pledged to keep working with the senator "until we get the job done." But she, too, highlighted the expansion of the child tax credit that had already been passed in the Senate's tax bill, even if it fell short of what Rubio wanted to see in the final version.

"We think he should be very excited about the progress we've made on that front," she said.

The last-minute demand by Rubio demonstrates the leverage individual Republican senators have in the final moments of the tax debate. With a narrow 52-48 majority, Republicans can afford to lose only two of their members if they are to pass the bill along party lines. One Republican senator, Bob Corker of Tennessee, voted against the Senate tax bill.

Other concerns are also looming, including the health of two Republican senators, John McCain of Arizona and Thad Cochran of Mississippi.

McCain's office said Wednesday that he was receiving treatment at Walter Reed National Military Medical Center for "normal side effects of his ongoing cancer therapy." And on Monday, Cochran had an outpatient procedure "to address a nonmelanoma lesion on his nose," a spokesman said, though the senator expects to vote in the Senate next week.

On Thursday, White House officials said that Vice President Mike Pence, who would break a 50-50 tie in favor of passing the tax bill, will delay a planned trip to the Middle East so that he can preside over the tax vote next week.

House and Senate Republicans agreed in principle Wednesday to the framework of a merged bill, which will scale back some popular tax breaks compared with the current law, including the deductibility of mortgage interest and the state and local tax deduction.

The final tax bill will allow a deduction of up to $10,000 in state and local taxes. But instead of limiting that deduction to only property taxes, as the House and Senate bills would have done, the $10,000 amount can be made up of property taxes as well as either income taxes or sales taxes.

When the House passed its tax bill last month, 12 of the 13 Republicans to vote no were from California, New York and New Jersey. On Thursday, Rep. Leonard Lance, R-N.J., who voted against the bill, said he would again vote no on the final bill.

"I favor retention of the deductibility of state and local taxes in their entirety, and I'm sorry that that was not the view of the conference committee," Lance said. "For me, $10,000, regardless of the configuration, is not strong enough."

Rep. Peter T. King of New York, another Republican who voted against the House tax bill, also plans to vote against the final bill, a spokesman said.

By pushing ahead with a limit on state and local deductions, Republicans could also be setting themselves up for political losses in higher-end coastal suburban districts that buttress their House majority. Those districts disproportionately house the upper-middle-class families that would most likely face tax increases if the bill becomes law, because they currently deduct such a large amount in state and local income and property taxes.

Democrats have targeted many of those districts for 2018, including parts of California, New York and New Jersey, which underperformed for Trump in 2016 relative to previous Republican presidential candidates.

"This bill is a suburban tax, plain and simple," Sen. Chuck Schumer of New York, the minority leader, said Wednesday.

The final bill adds back many of the prized tax breaks that were stripped from the House legislation, including allowing taxpayers to continue to deduct high out-of-pocket medical expenses and the interest paid on student loans. It will also continue allowing graduate students who receive tuition waivers to avoid paying taxes on that benefit. The bill also contains the Senate's repeal of the Affordable Care Act requirement that most Americans have health insurance or pay a penalty, and a provision that opens the Arctic National Wildlife Refuge in Alaska to energy exploration.

On Thursday, Republican leaders continued to express confidence that they were getting close to passing the most sweeping tax overhaul in decades.