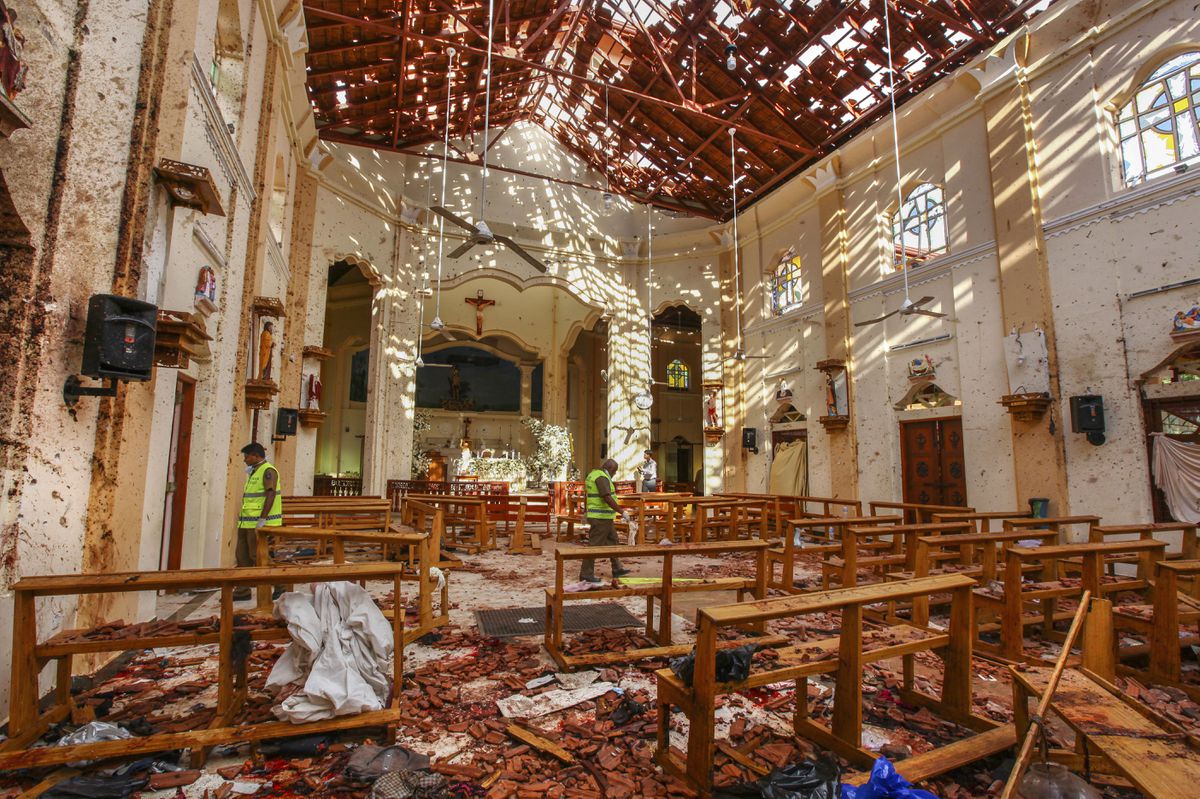 In this Sunday, April 21, 2019, a view of St. Sebastian's Church damaged in blast in Negombo, north of Colombo, Sri Lanka. Sri Lankan authorities blame seven suicide bombers of a domestic militant group for coordinated Easter bombings that ripped through Sri Lankan churches and luxury hotels which killed and injured hundreds of people. It was Sri Lanka's deadliest violence since a devastating civil war in the South Asian island nation ended a decade ago. (AP Photo/Chamila Karunarathne, file)

In this Sunday, April 21, 2019, a view of St. Sebastian's Church damaged in blast in Negombo, north of Colombo, Sri Lanka. Sri Lankan authorities blame seven suicide bombers of a domestic militant group for coordinated Easter bombings that ripped through Sri Lankan churches and luxury hotels which killed and injured hundreds of people. It was Sri Lanka's deadliest violence since a devastating civil war in the South Asian island nation ended a decade ago. (AP Photo/Chamila Karunarathne, file)

Eight separate bomb attacks on churches and luxury hotels on Easter Sunday left 290 people dead and another 500 hundred injured. A day after the coordinated explosions, which mostly targeted Sri Lanka’s capital city of Colombo, the names and stories of those who died are beginning to trickle out.

The vast majority of the victims were Sri Lankan, many of them Christians who were worshiping at churches in three cities when bomb blasts at around 8:45 a.m. splintered pews and collapsed ceilings.

Among the dead were four Americans, according to a spokesman for the State Department, with "several" others seriously injured.

Officials at an elite Washington-area private school, Sidwell Friends, confirmed the death of one of its students in an email to parents. The fifth grade boy, Kieran Shafritz de Zoysa, had been on leave for the last year in Sri Lanka and was killed in the bomb attacks Sunday.

"Kieran was passionate about learning, he adored his friends, and he was incredibly excited about returning to Sidwell Friends this coming school year," the school wrote. "We are beyond sorry not to get the opportunity to welcome Kieran to the Middle School."

At St. Anthony's Shrine in Colombo, the largest Catholic congregation in the capital, 52-year-old Delicia Fernando was sitting toward the front of the sanctuary when an explosion tore open the room. She and the children were okay, but her husband, Ravi, had been standing in the back of the church. They found him crushed under debris from the collapsed roof and his body pierced with shrapnel.

St. Anthony's is a common tourist destination, as are the three luxury hotels also attacked in Colombo. Sri Lanka officials said 39 of the victims were foreign tourists, and another 28 were wounded.

One of the foreign victims was Dieter Kowalski of Denver. His death was confirmed by his family and employer.

“It is with great [sadness] and deep regret that as Dieter’s brother that I confirm that Dieter was among the victim’s that passed away in Sri Lanka,” Derrick Kowalski wrote on Facebook Monday. “As we know that Dieter saw his friends as family, we would like to share our grief over this tragic incident.”

"We have all lost a brother today," Derrick Kowalski wrote.

Dieter Kowalski, a Wisconsin native working for the education publishing company Pearson, left Friday for a business trip to Colombo. “And the fun begins,” he wrote on Facebook. “Love these work trips. 24 hours of flying. See you soon Sri Lanka!”

Kowalksi had just arrived at the Cinnamon Grand Hotel when a bomb was detonated inside the ground-floor restaurant, where families and guests were gathered for an Easter breakfast buffet.

“We’re angry that a good man, who took simple pleasure in fixing things, has been killed, along with many others, by evil men and women who know only how to destroy,” John Fallon, the chief executive officer of Pearson, wrote in an email to employees Monday, TV station Fox 6 reported.

Kowalski was a senior leader for Pearson's operation technical services team. He was traveling to Sri Lanka to meet with local engineering teams to "troubleshoot some difficult challenges that were important to our customers," Fallon said in his email.

"Colleagues who knew Dieter well talk about how much fun he was to be around, how big-hearted and full-spirited he was. They tell of a man to whom we could give our ugliest and most challenging of engineering problems, knowing full well that he would jump straight in and help us figure it out," Fallon wrote. "Dieter, they tell me, was never happier than cheer-leading for our customers and our company and inspiring people in the best way he knew how - by helping them to fix things and doing it with joy, happiness and grace. He was a man who took great pride in the purpose of our company - helping our students progress in their studies and their lives mattered to him."

Other victims included the children of Danish billionaire Anders Holch Povlsen, who owns international clothing chain Bestseller, is the largest private landowner in Britain and is the largest single shareholder for the popular clothing brand Asos.

Povlsen and his family were visiting Sri Lanka for the Easter holiday, the BBC reported. Three of his four children were killed in the bombing attacks, a Bestseller spokesman told BBC.

"Unfortunately, we can confirm the reports," the spokesman said. "We ask you to respect the privacy of the family and we therefore have no further comments."

Sri Lankan news outlet Hiru News reported that celebrity chef Shantha Mayadunne and her daughter were also killed in the explosions. The women and their family were eating Easter breakfast in a restaurant in the upscale Shangri-La hotel in Colombo Sunday morning when the bombs detonated.

Just before the explosion, Mayadunne’s daughter, Nisanga Mayadunne, posted a photo of their family at the table and captioned it: “Easter breakfast with the family.”

Shantha Mayadunne was the first chef to have a live TV cooking show in Sri Lanka, ABC Australia reported. She published two books and taught cooking classes and workshops.

“When I heard the news, I was left numbed and shocked. I don’t know what more to say,” Radha Fonseca, Nisanga Mayadunne’s college friend, told Gulf News. “Destiny has taken away both of them. I am devastated.”

Cowkidar Sushma Swaraj, the Indian minister for external affairs, has been using her Twitter feed to share the names of victims confirmed dead in the Sunday blasts. At least five people killed were in Sri Lanka on vacation after working on India's general election Thursday, reported Australia ABC. The group had been staying at Shangri-La Hotel in Colombo.

Government officials in Japan identified a Japanese woman who had died in the blasts, reported NHK World-Japan. Kaori Takahashi, a Sri Lankan resident, was reportedly at Shangri-La eating breakfast with her family when a bomb exploded in the second-floor restaurant there.

Two engineers from Turkey and a young family member of several politicians in Bangladesh were also killed in the blasts, reported local media.

The Washington Post’s Joanna Slater contributed to this report.