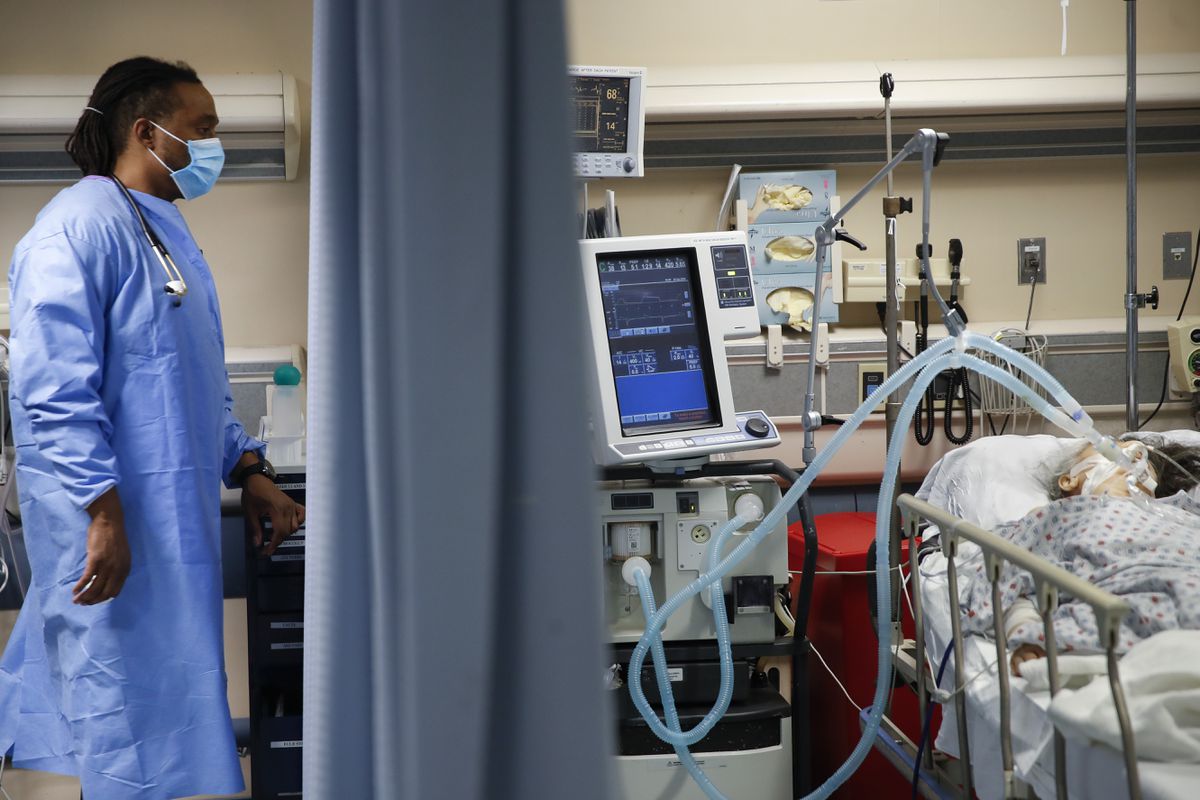 A nurse looks over at a COVID-19 patient who is attached to a ventilator in the emergency room, Monday, April 20, 2020, at St. Joseph's Hospital in Yonkers, N.Y. (AP Photo/John Minchillo)

A nurse looks over at a COVID-19 patient who is attached to a ventilator in the emergency room, Monday, April 20, 2020, at St. Joseph's Hospital in Yonkers, N.Y. (AP Photo/John Minchillo)

Craig Coopersmith was up early that morning as usual, and typed his daily inquiry into his phone. “Good morning, Team Covid,” he wrote, asking for updates from the ICU team leaders working across 10 hospitals in the Emory University health system in Atlanta.

One doctor replied that there was a strange blood problem in one of his patients. Despite getting anticoagulants, the patient was still developing clots in various parts of his body. A second said she'd seen something similar. And a third. Then Coopersmith's phone blew up as every person on the text chat reported the same thing.

"That's when we knew we had a huge problem," said Coopersmith, a critical care surgeon. As he checked with his counterparts at other medical centers, he became increasingly alarmed: "It was in as many as 20, 30, or 40% of their patients."

One month ago, as the country went into lockdown to prepare for the first wave of sick, many doctors felt confident they knew what they were dealing with. Based on early reports, COVID-19 appeared to be a standard variety respiratory virus, albeit a very contagious and lethal one with no vaccine and no treatment. But they’ve since learned that COVID-19 attacks not only the lungs, but also the kidneys, heart, intestines, liver and brain.

And many are also reporting bizarre, unsettling cases that don't seem to follow the textbooks they've trained on. They describe patients with startlingly low oxygen - so low that they would normally be unconscious or near death - talking and swiping on their phones. Asymptomatic pregnant women suddenly in cardiac arrest. Patients who by all conventional measures seem to have mild disease deteriorating within minutes and dying in their homes.

With no clear patterns in terms of age or chronic conditions, some scientists now hypothesize that at least some of these abnormalities may be explained by severe imbalances in patients' blood.

[All across the United States, the coronavirus is killing more men than women, data show]

The concern is so acute that some doctors groups have raised the controversial possibility of giving preventive blood thinners to everyone with COVID-19 - even those well enough to endure their illness at home.

Blood clots, in which the red liquid turns gel-like, appear to be the opposite of what occurs in Ebola, Dengue, Lassa and other hemorrhagic fevers that lead to uncontrolled bleeding. But they are actually part of the same phenomenon - and can have similarly devastating consequences.

Autopsies have shown that some dead people's lungs are filled with hundreds of microclots. Errant blood clots of a larger size can break off and travel to the brain or heart, causing a stroke or a heart attack. On Saturday, 41-year-old Broadway actor Nick Cordero had his right leg amputated after being infected with the novel coronavirus and suffering from clots that blocked blood from getting to his toes.

Lewis Kaplan, a University of Pennsylvania physician and head of the American Society of Critical Care Medicine said that every year, doctors treat a large variety of people with clotting complications, from those with cancer to victims of severe trauma, "and they don't clot like this."

The first sign that something was going haywire was in legs, which were turning blue and swelling. Even patients on blood thinners in the ICU were developing clots in them - which is not unusual in one or two patients in one unit, but not in so many at the same time. Next came the clogging of the dialysis machines, which filter impurities in blood when kidneys are failing, and were getting jammed up several times a day.

"There was a universal understanding that this was different," Coopersmith said.

Then came the autopsies. When they opened up some deceased patients' lungs, they expected to find evidence of pneumonia and damage to the tiny air sacs that exchange oxygen and carbon dioxide between the lungs and the bloodstream. Instead, they found tiny clots all over.

Zoom meetings were convened in some of the largest medical centers across the country. Tufts. Yale-New Haven. University of Pennsylvania. Brigham and Women's. Columbia-Presbyterian. Theories were shared. Treatments debated.

And while there was no consensus on the biology of why this was happening and what could be done about it, many came to believe the clots might be responsible for a significant share of U.S. coronavirus deaths - possibly helping to explain why such large numbers are dying at home.

In hindsight, there were hints that blood problems had been an issue in China and Italy as well, but it was more of a footnote in studies and on information-sharing calls that focused on the disease's effects on lungs.

"It crept up on us. We weren't hearing a tremendous amount about this internationally," said Greg Piazza, a cardiovascular specialist at Brigham and Women's who has launched a study into bleeding complications of COVID-19.

Helen Boucher, an infectious diseases specialist at Tufts Medical Center, said there's no reason to think there's anything different about the virus in the United States. More likely, she said, the problem was more obvious to American doctors because of the unique demographics of U.S. patients, including large percentages with heart disease and obesity that make them more vulnerable to the ravages of blood clots. She also noted small but important differences in the monitoring and treatment of patients in ICUs in this country that would make clots easier to detect.

"Part of this is by virtue of the fact that we have such incredible intensive care facilities," she said.

A leading cause of death

The body's circulatory or cardiovascular system is often described as a network of one-way streets that connect the heart to other organs. Blood is the transport system, responsible for moving nutrients to the cells and waste away from them. A common cold, a cut on the finger can lead to changes that help repair the damage, but when the body undergoes a more significant trauma, the blood can overreact, leading to an imbalance that can cause excessive clots or bleeding - and sometimes both.

Scientists call this "hemostatic derangement." In math, a derangement is a permutation in which no element is in its original position.

Harlan Krumholz, a cardiac specialist at the Yale-New Haven Hospital Center, said no one knows whether blood complications are a result of a direct assault on blood vessels, or a hyperactive inflammatory response to the virus by the patient's own immune system.

"One of the theories is that once the body is so engaged in a fight against an invader, the body starts consuming the clotting factors, which can result in either blood clots or bleeding. In Ebola, the balance was more toward bleeding. In COVID-19, it's more blood clots," he said.

A Dutch study published April 10 in the journal Thrombosis Research provided more evidence the issue is widespread, finding that among 184 COVID-19 patients in an intensive care unit, 38% had blood that clotted abnormally. The researchers called it "a conservative estimation" because many of the patients were still hospitalized and at risk of further complications.

Early data from China on a small sample of 183 patients also showed that more than 70% of patients who died from COVID-19 had small clots develop throughout their bloodstream.

While acute respiratory distress syndrome, or ARDS, still appears to be the leading cause of death in COVID-19 patients, blood complications are not far behind, said Behnood Bikdeli, a fourth-year-fellow at Columbia University Irving Medical Center, who helped anchor a paper about the blood clots in the Journal of The American College of Cardiology.

"My guess is it's one of the top three causes of demise and deterioration in COVID-19 patients," he said.

That recognition is prompting many hospitals to overhaul how they think about the disease and treat it. When the novel coronavirus first hit, the Centers for Disease Control and Prevention and others put people with asthma at the top of their lists of those who might be the most vulnerable. But recently, European researchers writing in the journal Lancet noted that it was "striking" how underrepresented asthma patients had been. Earlier this month, when New York state released data on the top chronic health problems of those who died from the coronavirus, asthma was not among them. Instead they were almost all cardiovascular conditions.

Some medical centers recently have begun giving all hospitalized COVID-19 patients small doses of blood thinners as preventive measures, and many adjusting doses upward for the most seriously ill. The challenge is that the more you give, the greater the danger of upsetting the balance in the other direction and having the patient bleed out.

Another big mystery the doctors hope the blood issue will shed light on is why some maternity patients are collapsing during or after giving birth.

A paper published in American Journal of Obstetrics & Gynecology MFM in late March detailed how two women with no prior symptoms of COVID-19 ended up in intensive care. The first was a 38-year-old patient of New York-Presbyterian/Columbia University Irving Medical Center in Manhattan who spiked a fever of 101.3 while undergoing a C-section delivery and began bleeding profusely. The second woman also underwent a C-section. But the next day, the 33-year-old developed a cough that progressed to respiratory distress. Her heart started beating irregularly and her blood pressure jumped to as high as 200/90.

Several physician-researchers said that the relationship between COVID-19, clotting and pregnant women is "an area of interest." Women in childbirth have always experienced clotting and bleeding complications because of the involvement of the blood-rich placenta but it's possible COVID-19 may be triggering additional cases by making some women's bodies "lose balance."

“There’s lots of speculation,” Krumholz said. “That’s one of the frustrating things about this virus. We’re in a lot of darkness still.”