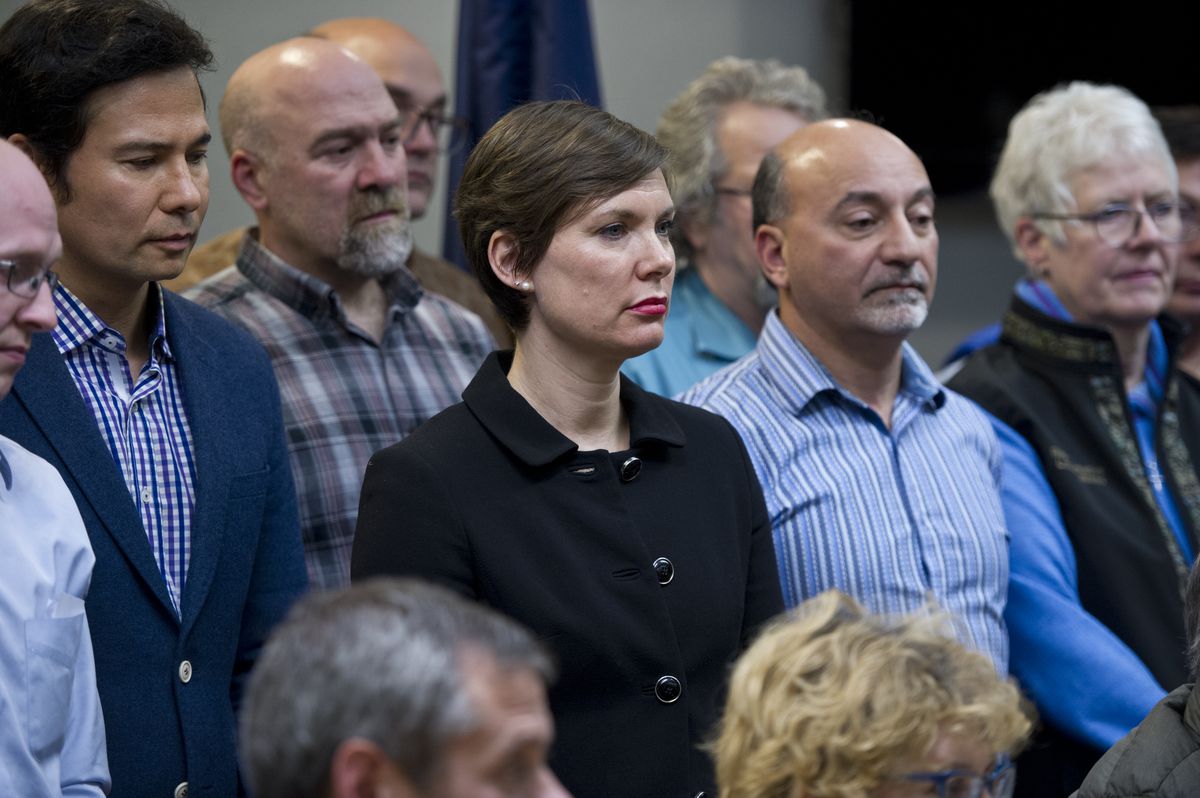 Rep. Ivy Spohnholz, D-Anchorage, center, said she is learning about the health care system and admitted, “I’m still trying to get a hold of what all the acronyms mean.” (Marc Lester / Alaska Dispatch News file)

Rep. Ivy Spohnholz, D-Anchorage, center, said she is learning about the health care system and admitted, “I’m still trying to get a hold of what all the acronyms mean.” (Marc Lester / Alaska Dispatch News file)

Legislators wooed by these professional persuaders are bound to listen because many are alarmingly ignorant about health care issues. And because the Legislature has starved or killed agencies that could give it objective research on health care. And because no one lobbies for the public.

I talked to the incoming chairs of the Health and Social Services committees in the House and Senate, who should be the best informed on these issues.

Rep. Ivy Spohnholz, D-Anchorage, said she is learning about the health care system. She was aware of some of the ideas that were talking points for candidates in the last campaign but, she frankly admitted, "I'm still trying to get a hold of what all the acronyms mean."

Sen. David Wilson, R-Wasilla, said he didn't plan to focus on medical cost issues in his committee. With no staff before taking his new office, he hadn't started to grapple with the issues.

"I don't know that I have much to offer as yet," he said.

Three changes to the health care system are under discussion that, although probably too small to substantially affect rising costs, could help.

Some other states have price transparency laws that allow patients to find out how much procedures will cost before seeking care.

Price transparency is necessary for competition — you have to know the price before you can compare — but it is not sufficient. In a market of monopolies such as Alaska health care, there would be few choices to compare even if you knew the price.

The state also is considering reforming the so-called "80th percentile rule." This regulation limits insurance company discounting of payments to providers and is intended to protect patients from surprise balances that are not covered. But by allowing providers to define the customary rates insurers must pay, it removes their leverage to control costs.

Lori Wing-Heier, director of the Alaska Division of Insurance, will hold a hearing on changing the rule on Jan. 6. She does not need legislative action to make a change.

Businesses and insurance underwriters formed Alaskans for Sustainable Healthcare Costs in recent months and have been meeting in Anchorage to prepare for Wing-Heier's hearing. This group is the first organized business opposition to Alaska's health care lobby that I am aware of.

The third change under consideration would put more government employees and retirees under a single health care plan, potentially reducing cost. The Legislature commissioned a study of the concept last year, which it called the Alaska Health Care Authority.

A first phase of the study is expected in February with research on who could be covered and how an authority could purchase insurance. In June, the Department of Administration hopes to release a second phase with bigger ideas about changing the system, said Commissioner Sheldon Fisher.

That second phase of the study is the best hope for transformation that could help private businesses and individuals as well as the state. But it is still only a study and there's no evidence legislators want radical solutions.

Simply buying insurance in larger and larger groups is not a solution when the problem is the cost of the underlying care. As long as there is only one orthopedic or cardiac partnership in Anchorage, or only two private hospitals, insurance companies will lack leverage to hold down payments. Other Alaska communities have even less competition.

The state could contract for a managed-care organization that would provide health care by salaried doctors it employs in facilities it owns. Fisher said the study's second phase will look at managed care, which would require a change in state law.

But would doctors and hospitals ever unleash their legislators to allow that change?

I tried to learn the compensation of doctors who own the orthopedic practice here in Anchorage, the merged Orthopedic Physicians Alaska and Anchorage Fracture and Orthopedic Clinic.

Some lawyers know what the doctors earn, since doctors get involved in lawsuits. But Alaska's professional social class is small and its members avoid criticizing one another openly, and I couldn't find doctors or lawyers who would tell me the salaries on the record.

Randomly searching court records with doctors' names, I found 2016 papers in which an orthopedic specialist in Anchorage reported income of $259,000 a month, equating to $3.1 million a year.

A 2010 study paid for by the Legislature found the average salaried physician in Alaska earns about $200,000 a year. That pay difference between a staff doctor and a partner in a private practice is a challenge for starting managed care, or for any reduction in health care cost.

The Legislature, after receiving the last set of reports on health care costs it commissioned, which included the report on doctor compensation I just cited, eliminated funding for the Alaska Health Care Commission in 2015 without taking substantive action on its cost-cutting recommendations. The commission's information is still online but much of it is out of date.

Social scientists at the University of Alaska Anchorage also produced a powerful study of the cost problem, now outdated. Since then, funding has not been available to answer many of the most basic questions, said Mouhcine Guettabi, a health care expert at the UAA Institute of Social and Economic Research.

I don't think the lack of information is an accident. The Alaska health care system is not dysfunctional. It functions beautifully for those who profit from it.

With their power in Juneau, health care providers have been able to draw an ever greater share of the Alaska economy to their businesses, with high compensation and ever-expanding employment and facility construction. But, like a parasite that kills its host, even those profiting most richly must realize by now that Alaska's economy cannot continue to hand over an ever-increasing share of its wealth.

Health care costs can destroy Alaska's economic vitality and threaten Alaskans' personal well-being. That should be enough motivation to take Juneau back from the lobbyists.