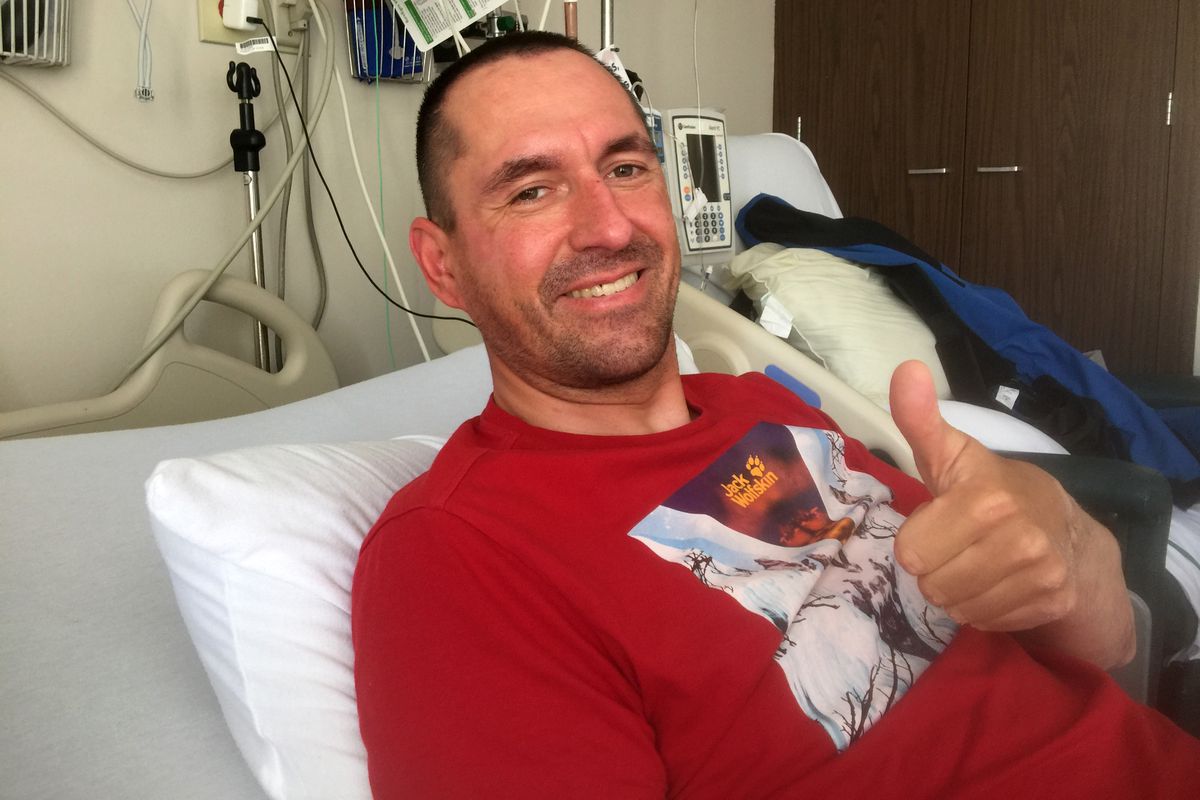 Martin Takac, 38, who spent nearly 15 hours trapped deep in a narrow crevasse on Denali June 5, said Monday he is ready to get out of Fairbanks Memorial Hospital and travel to his home in Slovokia. (Dermot Cole / Alaska Dispatch News)

Martin Takac, 38, who spent nearly 15 hours trapped deep in a narrow crevasse on Denali June 5, said Monday he is ready to get out of Fairbanks Memorial Hospital and travel to his home in Slovokia. (Dermot Cole / Alaska Dispatch News)

FAIRBANKS— Before shaking off the haze of a coma, Martin Kamzik Takac saw that a beautiful woman had taken hold of his hand. He wondered for a moment if he had died and gone to heaven.

He woke up not in heaven, but on the second floor of Fairbanks Memorial Hospital, a student nurse holding his hand. To him it seemed like a miracle because he had not expected to survive an ordeal on Denali two weeks ago.

The 38-year-old Slovakian climber, a trauma surgeon, spent more than 15 hours wedged in a crevasse about 60 feet below daylight, unable to do more than move his fingers.

"I realized that the thing to survive was to stay calm, to stay cool and just think what can happen to me," he said. "The biggest problem was I was wedged. Even though I didn't break anything, except the ribs, which I didn't know when I fall down. I was wedged and thought yes, you have to move with the fingers because if you stop this you'll freeze. I was like a sandwich."

He remembers some of what happened, but lost consciousness as the hours passed and was admitted to the hospital with severe hypothermia. He was told later he had a body temperature of about 79 degrees, which was close to fatal.

He lost all feeling in his right arm a couple of hours after he fell as it was pinned tight against his body. Takac remembered shivering and hearing voices and a helicopter, but couldn't see anything or turn his head.

Because of the drop in body temperature, his kidneys had almost stopped functioning, requiring dialysis in the hospital, but in the last several days he has made a strong recovery and is ready to go home.

I stopped by his hospital room Monday afternoon, where most of his climbing gear that survived the trip was arrayed near the end of the bed. He lost his helmet and poles when he went down the narrow crevasse, as well as his gloves.

Two weeks after the accident, he is able to get out of bed and walk short distances, though his right arm needs a sling and time to heal.

He told me about reaching the summit and the beauty of Alaska's tallest peak. He also mentioned that he wished he had been on skis, not snowshoes, when he stepped on a snowbridge that gave way at about 11:30 p.m. June 5.

He said he will be forever grateful to the National Park Service rangers and volunteer mountain rescuers and others who dug him out of the ice just in time. He showed me a get-well card signed by 14 rangers he has not met.

"They returned me back home on this planet," he said of the rescuers. "I think a new life began for me because in some moments in this crevasse I felt so alone and so upset, so afraid of my life that I will never return back."

Without a watch, he had no idea of how long he was awake as he hung there in the dark, thinking over the events of his life. He said it was like watching a movie in his mind.

"I thought if I die it will be a nice death for me because I love mountains. But if not, I will be the happiest man in the world to return back and start a new life and maybe it will be a new beginning for me, maybe work or maybe personal life, I don't know, the future will show me," he said.

He was trapped in a spot so crooked that it was impossible to just pull him out by getting a rope around his backpack.

"One time I thought the end is coming," he said. "It was like, do you know the word aura? I was just waiting for when I will end, in the heaven, in the hell or maybe somebody will come for me to take me out?"

Takac said he was wearing snowshoes because he had joined a large climbing party late in the planning process and thought he did not have time to get skis. In retrospect, that was a mistake.

He and the other climber on snowshoes, a man from the Czech Republic, had fallen about 40 minutes behind the rest of their party. At about 11:30 p.m. June 5, Takac suggested that they camp for the night and continue the next day, but his companion suggested they continue.

He fell feet first close to a camp that is five miles from the base camp where the planes land. Takac said he had stopped to be careful near what was marked as a danger spot. He took one step on the snowbridge and went down.

"I just saw flashes of light from upstairs there," he said. "I lost the helmet. I lost my gloves. I realized that just surviving I had to stay cool, stay calm, and just thinking what could happen to me.

He believes the rescuers may have been about 10 to 12 feet above him when he lost consciousness. He said that was just a guess because he was unable to turn his head to look.

After some hours the rescuers feared that he might have died because he was quiet, but they kept working. They lifted him from the cramped spot at about 3:30 p.m. June 6.

"Two people on the rope, it's a little bit problem. When we were going down, there was a storm, it was snowing, windy, foggy and so on. We didn't see anything until the 20 meters and we used trekking poles to go down. If we were on the rope, you need to have ice ax handy," he said.

"I can't imagine how to use ice ax with snowshoes to go down with a sled," he said. "My friend his weight and gear together was about 30 kilograms less than me."

He worried that kinetic energy that dropped him could pull the other climber down with  him.

He was planning to go home Tuesday night on commercial flights, traveling business class and accompanied by a medical escort sent to Alaska from Slovokia by his health insurer.

He said climbers go to the mountains to "find their limits." He started a year ago to climb the "Seven Summits," the highest mountains on each continent, and joked that he exceeded 100 percent of his limit by spending 15 hours trapped in the ice.

While he dreams of going back to the mountains because there are more peaks to climb, he said if that is not to happen, "There will be another mission for me in this new life. I will wait for what God will send me, what to do, who to help."