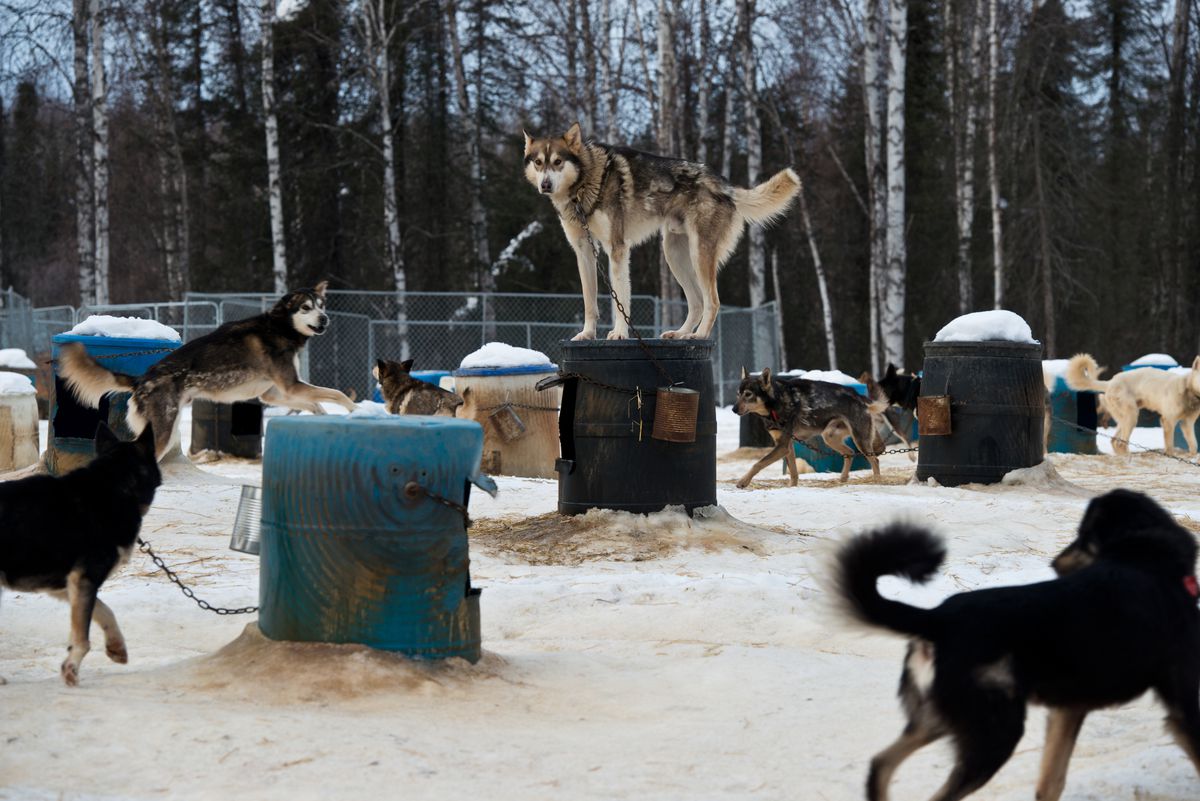 A member of Dallas Seavey’s team watches his mates from atop a dog house at his home in Willow on Feb. 20, 2015. (Marc Lester / ADN)

A member of Dallas Seavey’s team watches his mates from atop a dog house at his home in Willow on Feb. 20, 2015. (Marc Lester / ADN)

A movie called "Blackfish" drove down SeaWorld's stock by 50 percent, forcing its CEO to resign and ending its signature event: performances by orca whales. Now a Canadian filmmaker hopes to have a similar impact on the Iditarod Trail Sled Dog Race with a movie called "Sled Dogs."

Director Fern Levitt believes the race cannot be run without abusing dogs. She also believes dog care practices that are standard among Alaska racers are inhumane. She wants to end all commercial mushing.

Saturday in Anchorage, Levitt will participate in a protest at the Iditarod start and show the movie and answer questions at the Loussac Library at 2 p.m.

"Sled Dogs" probably won't receive the same exposure as "Blackfish," which premiered at the Sundance Film Festival and showed in theaters nationally and on CNN. But it will be widely available online.

And if these filmmakers don't hit the big target presented by the Iditarod, someone will.

Attitudes about animals have changed. Images distrurbing enough to provoke a backlash against mushing are easy to obtain. Dog lots are not pretty places.

[John Schandelmeier: For the sake of the dogs, is it time to slow down the Iditarod?]

I talked to people on all sides. The most interesting reaction to the film came from my 17-year-old daughter, who loves dogs as much as anyone I know. She made me realize that the fate of the Iditarod depends on Alaska culture and how much of it survives outside the national mainstream.

Any objective viewer of the film can see that it isn't meant to be fair. Speakers who aren't clearly identified make charges without response or evidence. Dreadful images juxtapose with events that aren't really related.

But that's not the point. Film is an emotional medium driven by pictures and music. The question is whether these images — either in this form or another — would resonate with viewers enough to make them turn against mushing.

Levitt believes the images speak for themselves. And they do make some undisputed points.

Completing a 1,000-mile race in eight days is brutal for dogs. While the overwhelming majority of dogs don't appear permanently hurt by it, the filmmakers inevitably found unhappy, sick and injured dogs on the trail.

Building large teams produces unneeded dogs. Levitt shows their corpses. She produces no direct evidence of Iditarod mushers killing dogs, but certainly some in the broader industry do.

A farmer would call that culling. Levitt calls it murder.

In our conversation, she pointed out that farming is becoming more humane. She's right that more Americans are seeking out meat produced under free-range conditions.

But in our country, dogs have risen above other animals. Their status often exceeds that of the human underclass. Plenty of dogs get better health care than some people. We dump helpless mentally ill people on Alaska's winter streets, but not dogs.

Iditarod chief operations officer Chas St. George said he welcomes the social change that has elevated dogs from livestock to something better. He believes the race serves dogs well. The Iditarod is mandating good dog care.

But St. George admitted that the Iditarod is vulnerable to the negative emotions that can be provoked by images of dog lots.

Alaska mushers tether dogs on chains around shelters often made of plastic barrels. "Sled Dogs" shows many sequences of dogs' manic circling on their tethers, waste frozen to their houses. It shows metal stakes nearly worn through from frantic circling.

St. George maintained that Iditarod dogs spend much time off tethers while training, interacting with tourists or socializing like a pack. But there's no way for an outsider to verify that, and talk of it can't compete with film of half-crazy dogs jerking on short chains.

Levitt maintains tethering is inhumane and produces experts who agree.

I was a little nervous showing her film to my daughter. Becky grew up adoring dogs. As soon as she could read, she memorized an encyclopedia of dog breeds. I'm sure a lot of parents have watched the same phenomenon with wonder. Where did this come from?

But her reaction to "Sled Dogs" was ambivalent, like mine.

Becky said she would have felt differently a year ago, but last summer she traveled with a program called the Experiment in International Living to Nicaragua, where she lived with a subsistence farming family in a house without window glass.

That poor but happy village made a deep impression on her. She returned to question our affluent, neurotic society.

Animals lived among the people in the village in Nicaragua. They were food for the table.

Her host family had a dog, but it didn't come inside. Outdoors, it roamed in a pack with the other village dogs. It seemed as happy as any dog, Becky said, and probably happier, even without scientifically balanced food, health insurance or a knitted sweater. It was happy being a dog with other dogs.

Becky said that when she talked to the dog, she realized her host parents were looking at her as if she was insane.

Dog mushing developed in villages like that here in Alaska. Until snowmachines arrived in the 1960s, dog teams provided transportation and support for subsistence hunting.

The idea of dashing across Alaska from one side to the other in a week would have seemed absurd to those practical mushers, but the cultural identity of sled dogs survived. Dogs were not people. They were not pets. But their existence wasn't necessarily miserable (although at times it surely was).

The biggest difference between that Alaska and the one we live in today is our melding with the national culture. Urban Alaska has become as mainstream as Walmart or YouTube. Anchorage still carries the Alaska mystique, but some people in Las Vegas still wear cowboy hats, too.

Even if Levitt's film doesn't turn out to be as devastating as "Blackfish" was for SeaWorld, it's hard to imagine the race 10 years from now with national media attention and big-name sponsors. At some point, dog lot imagery will break through to middle America animal lovers and make them turn away.

When that happens, will the Iditarod and all it stands for continue as a purely Alaska event, without the big money? And will Alaska support the race when that happens?