State employees: I have your backs 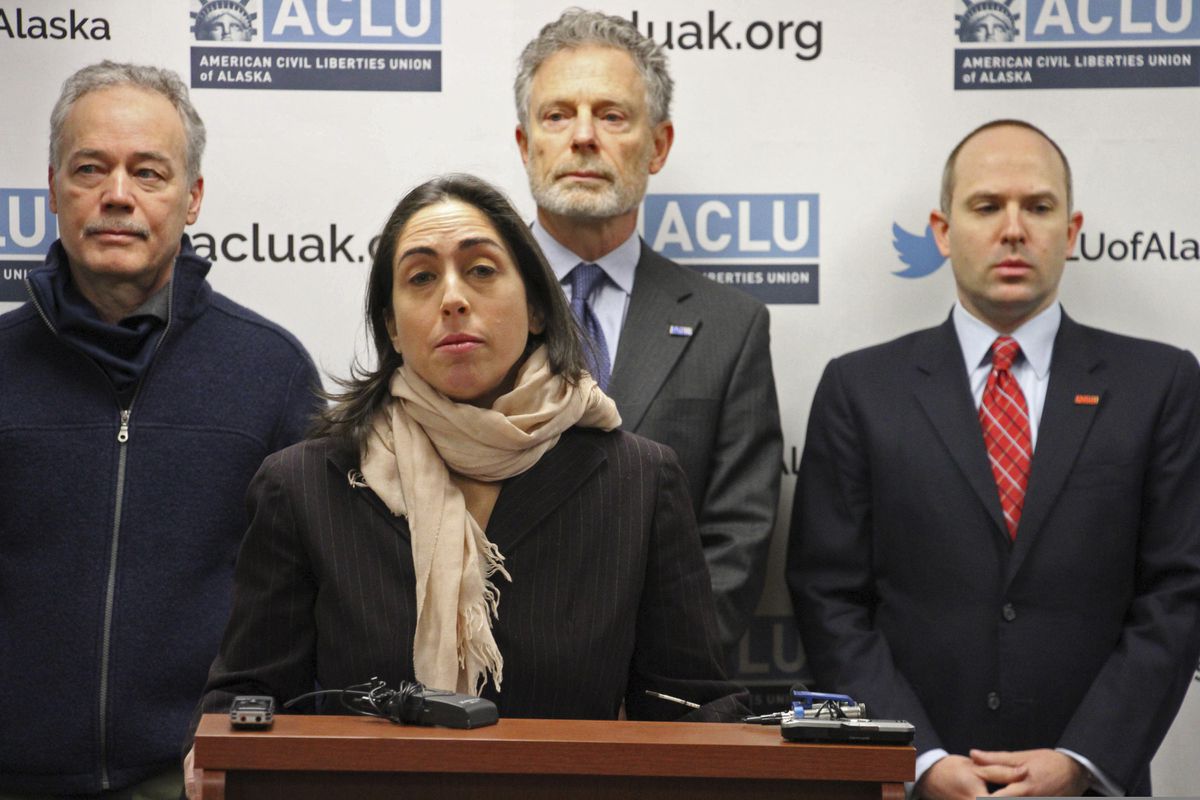 Former Alaska Assistant Attorney General Elizabeth Bakalar speaks during a news conference Thursday, Jan. 10, 2019, in Anchorage, Alaska. She is one of three former state employees who are claiming wrongful termination after they were fired by the new administration of Alaska Gov. Mike Dunleavy. The three are being represented in their lawsuits by the American Civil Liberties Union of Alaska. Also pictured behind her from left are another plaintiff, former Alaska Psychiatric Institute staff psychiatrist Dr. John Bellville, and ACLU of Alaska officials Stephen Koteff and Joshua Decker. (AP Photo/Mark Thiessen)

Former Alaska Assistant Attorney General Elizabeth Bakalar speaks during a news conference Thursday, Jan. 10, 2019, in Anchorage, Alaska. She is one of three former state employees who are claiming wrongful termination after they were fired by the new administration of Alaska Gov. Mike Dunleavy. The three are being represented in their lawsuits by the American Civil Liberties Union of Alaska. Also pictured behind her from left are another plaintiff, former Alaska Psychiatric Institute staff psychiatrist Dr. John Bellville, and ACLU of Alaska officials Stephen Koteff and Joshua Decker. (AP Photo/Mark Thiessen)

November 16, 2018, 4:45 p.m., the Friday before Thanksgiving. That’s when I knew. That’s the moment I knew that the state of Alaska, its constitution and its citizens were in trouble.

In an unprecedented and vindictive act — which was meant to intimidate and proved to be a canary in the coal mine of governmental malfeasance — Tuckerman Babcock, Gov. Mike Dunleavy’s incoming chief-of-staff, demanded resignations from some 1,200 non-politically appointed state employees.

The entire Department of Law, where I worked, was asked to resign and pledge allegiance and loyalty to the incoming governor or, as Mr. Babcock said in the newspaper, “be terminated.” This despite the fact that the oath lawyers take when we are admitted to the bar requires us to support and uphold the constitutions of Alaska and the United States — not to bow before a king or a dictator.

I had spent my whole career defending, and often winning, cases for five consecutive administrations of Alaska Republicans. Never once did I have a problem doing this, or taking professional positions that didn’t comport with my own politics. My job was to call balls and strikes while advancing the policy goals of the administration within the bounds of the constitution, and I did it well enough to get promoted regularly.

It was this last part — the “within the bounds of the constitution” part — that proved, for the first time, to be a problem, just as it was for the Trump administration that Dunleavy and Babcock openly idolized and emulated.

I submitted the loyalty pledge but was fired anyway, along with one other colleague and close friend, Ruth Botstein. Ruth was a prestigious appellate lawyer who just weeks earlier had argued the state’s conservative water rights case in the U.S. Supreme Court — and won. The two of us were high-performing senior attorneys with no conceivable reason to be singled out and fired.

No conceivable constitutional or legal reason, that is. But both Ruth and I had publicly criticized President Trump. In other words, we had the temerity to use the rights this country gave us, and we had wrongly assumed those rights would be respected.

When superiors with whom I had worked closely, trusted, and admired for more than 12 years called to tell me that “unfortunately,” the new administration wanted me gone, the grief and betrayal I felt was indescribable. I packed up my office in three hours and stayed in my pajamas, crying, for weeks.

But my next call was to the American Civil Liberties Union, because I knew I had been illegally and unconstitutionally fired for expressing my political opinions. And although Alaska is an “at-will” employment state, and anyone can be fired for “any” reason, that reason must still be legal. This was not. So the ACLU sued, along with two Alaska Psychiatric Institute psychiatrists dismissed for refusing to pledge allegiance to Dunleavy and Babcock.

Eight months later, the worm is starting to turn. I’m awash in paying work. A federal judge has ordered our cases to proceed to discovery. The governor’s decision to veto $444 million from the budget, harming seniors, students and Medicaid patients, is grossly unpopular. And we still don’t have that $6,700 Permanent Fund dividend.

A very serious recall effort is underway, and it’s not some half-cocked stunt being run by hippy crackpots, either. It’s a well-funded, well-organized operation that is being conducted by serious people you would expect to be sympathetic to this governor, like coal executives and former Republican legislators. It collected almost a third of the signatures it needs for the initial phase on the very first day.

And “unfortunately” for Dunleavy, it just so happens that I wrote the last two Attorney General Opinions on the law of recall in Alaska (Kyle Johansen (2011) and Lindsey Holmes (2013), neither of whom we recommended be recalled). They are right there on the Department of Law website for all to see, next to Kevin Clarkson’s smiling face under “Law Resources.” Each is a multi-page, single-spaced primer on the history and standards of recall, and I would encourage anyone who thinks there are insufficient legal grounds to recall this governor to read those opinions in full.

Fifteen thousand state employees saw what happened to me and Ruth — our firings were a warning shot across the bow to others as much as anything else. And so they are naturally afraid to sign the recall application or petition.

I was proud to be one of those 15,000 employees. I know the vast majority of them work hard and simply want to do a good job and have health insurance for themselves and their families. State employees plow your roads and issue your driver’s license and cut your child support and PFD checks, among countless other tasks that impact your daily lives.

And to those 15,000 state employees, at least those who are not politically appointed, I am here to tell you that you have a constitutional right under both the state and federal constitutions to sign that recall petition. Alaska can recall this governor without you, but it shouldn’t have to. And so I am also here to tell you that if the state retaliates against you in any way because you signed on to this recall, I will personally represent you, for free, on a First Amendment claim.