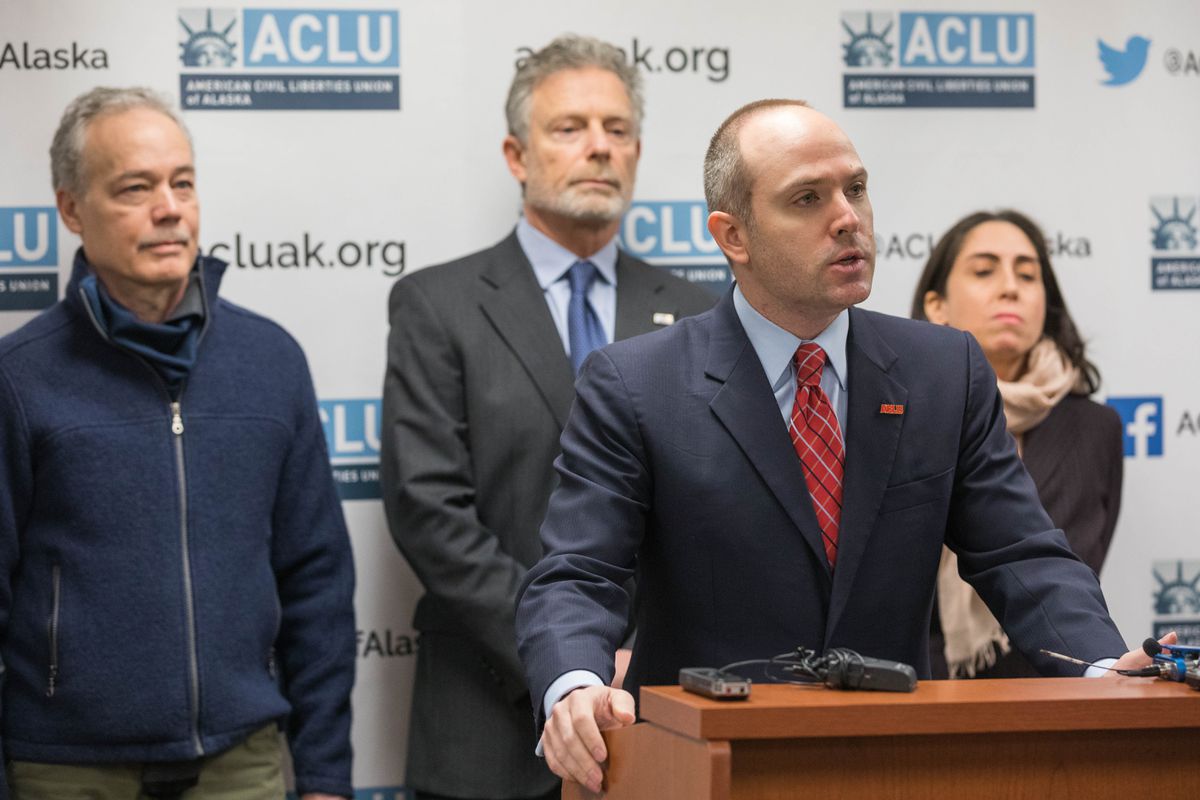 ACLU of Alaska Executive Director Joshua Decker announces lawsuits against Gov. Mike Dunleavy, his Chief of Staff Tuckerman Babcock, and the state of Alaska on Thursday. Behind Decker are two of the three plaintiffs, Dr. John Bellville, left, and Libby Bakalar, right, state employees who were terminated after Gov. Dunleavy took office. Also behind Decker is Stephen Koteff, legal director for the ACLU of Alaska. (Loren Holmes / ADN)

ACLU of Alaska Executive Director Joshua Decker announces lawsuits against Gov. Mike Dunleavy, his Chief of Staff Tuckerman Babcock, and the state of Alaska on Thursday. Behind Decker are two of the three plaintiffs, Dr. John Bellville, left, and Libby Bakalar, right, state employees who were terminated after Gov. Dunleavy took office. Also behind Decker is Stephen Koteff, legal director for the ACLU of Alaska. (Loren Holmes / ADN)

JUNEAU — The Alaska chapter of the American Civil Liberties Union is filing suit against the administration of Gov. Mike Dunleavy on behalf of three former state employees, alleging it violated state and federal law when it fired them as part of the transition from Gov. Bill Walker.

All three complaints assert the state violated the First Amendment and the free-speech sections of the Alaska Constitution.

The state of Alaska has 30 days to respond in court to the ACLU’s lawsuits.

“It is the State’s policy not to comment on pending litigation, and this case involves personnel matters, which are confidential," Cori Mills, a spokeswoman for the Department of Law, said in a statement provided by Dunleavy press secretary Matt Shuckerow. “The State of Alaska will review the complaint and file its response with the court, at which time we can provide a copy of the court filing.”

“When the government silences its own employees in violation of the constitution, the government must be held accountable,” Bakalar said at a press conference convened by the ACLU to announce the lawsuits.

“Otherwise,” she continued, “we lose our most cherished and basic freedom as Americans: The right to think and speak for ourselves.”

Bakalar had been an assistant attorney general since 2006, representing various state agencies including, most recently, the Alaska Division of Elections. In 2014, Bakalar became an avid blogger and, after the 2016 election of President Donald Trump, used her blog to criticize him and his policies. Those criticisms appeared alongside posts about parenting, cosmetics and pop culture.

Bakalar was subject to a complaint about her blogging and was investigated by the Department of Law but was found to have committed no error, according to Thursday’s complaint. The complaint goes on to draw a direct line between the blogging and her firing.

“Defendants retaliated against Ms. Bakalar for her public and political speech by terminating her employment,” the complaint states.

Asked how the ACLU can make that connection, ACLU Alaska director Joshua Decker said, “There was no reason, based on the merits of her work, for her to be let go.”

Bakalar had worked for 12 years in the Department of Law, for independent and Republican governors, and had received regular promotions and awards for merit.

As part of the transition process between governors, hundreds of at-will state employees were asked to submit letters of resignation. The new administration could accept those letters — effectively firing the employee — or reject them, leaving the employee at work. The ACLU complaints state that more than 1,200 requests for letters of resignation were sent to state employees. A list provided by the Walker administration to the Anchorage Daily News in November lists 804.

Bakalar sent a letter of resignation, which was accepted 18 minutes after Dunleavy’s inauguration, according to the complaint. Two other assistant attorney generals are known to have had their letters of resignation accepted.

Blanford and Bellville declined to submit letters of resignation and were fired soon afterward. Their complaint states, “Like the United States Constitution, the Alaska Constitution’s free speech guarantee includes both the right to speak freely and the right to refrain from speaking at all.”

All three are seeking their jobs back, back pay, an injunction against retaliation, and punitive damages to be assessed at trial.

It is not clear how many Alaskans are in circumstances similar to those of Bakalar, Blanford and Bellville. Despite public records requests from numerous media organizations, the Dunleavy administration has not provided a list of employees fired during the transition.

In an email received Thursday morning, Angela Hull, the governor’s director of correspondence, said the Department of Law, was reviewing records that would reveal the extent of employee turnover during the transition between governors.

“I do apologize that this has taken so long, but to repeat myself, previous administrations have never received similar requests, and identifying existing records that could be responsive has been very challenging,” she wrote.

Under Alaska law, the vast majority of state employees fall into three categories: Classified, partially exempt or exempt from the rules of the state personnel act.

Bakalar’s position was listed as partially exempt, according to records obtained by the Daily News. The two psychiatrists were in exempt positions.

Article 12 of the Alaska Constitution states, “The legislature shall establish a system under which the merit principle will govern the employment of persons by the State.”

The state personnel act, created as a result of that constitutional clause, states that merit employment policies include “selection and retention of an employee’s position secure from political influences.”

“There is a misperception that because Alaska is an ‘at will’ state and these are ‘exempt’ or partially ‘exempt’ positions that the government can fire our clients for any reason,” said ACLU of Alaska Legal Director Stephen Koteff in a prepared statement.

“In fact, no employee can be fired or retaliated against for an illegal reason and no one loses their constitutional rights just by working in Alaska or serving the public. It’s been more than seventy-five years since the United States Supreme Court said the government can’t force a person to say the ‘Pledge of Allegiance,’ and this is no different.”